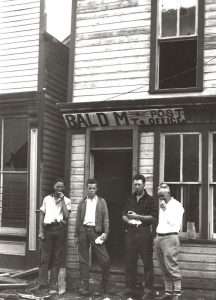 John W. Ratliff was an early settler of Gilpin County, who arrived in Nevadaville in 1860. He had a long and varied career, in which he helped Nevadaville through its developmental years and saw it through its heyday.  Mr. Ratliff’s most notable accomplishments were postmaster and justice of the peace. As justice of the peace, Mr. Ratliff duties would include: settling disputes in miner’s court, officiating weddings, and swearing-in the new town leaders, who would be elected annually every April.

Mr. Ratliff was appointed the town postmaster in 1861, and he ran the post office in his shop. The accompanying photos show the Bald Mountain Post Office on the south side of Main Street. Here is a Rocky Mountain News advertisement from February 13, 1865, which describes Mr. Ratliff’s array of merchandise in his post office building:

“Keeps constantly on hand at wholesale and retail a well selection of stock of general merchandise, groceries, and provisions, mining supplies, dry goods, notions and in brief, everything anybody in Nevada District may desire.”

Mr. Ratliff’s merchandise inventory selection changed over time, to accommodate the needs of the town. In the early years he sold mining supplies and tools. Later his merchandise selection favored tobacco and stationary supplies. He provided the Nevadaville town’s stationary. An example of his stationary is shown with this article.

Here is an excerpt from a 1929 article by Frank Farley, in which he interviews Mr. Ratliff’s daughter Lucy:

Nevadaville was once a Thriving Mining Camp, but is now a collection of Deserted Homes, Denver Woman Tells of Old Days of Mining Excitement. Mrs. A. A. Ritter of 522 South Franklin Street Denver, like many other prominent Denver citizens, lived in Nevadaville when the town was a busy mining camp. She was born there. Nevadaville to Mrs. Ritter is not the one-man town but the scene of her girlhood, when as Lucy Ann Ratliff, she romped up and down the steep trails through the tidy little streets. The houses now deserted are to her the homes of men and women who have since become wealthy or famous or have gone their way to other parts of the country. The store and the post office, now deserted buildings, are to her the business place of her father.  “I remember seeing candy pails of gold dust in my father’s store,” Mrs. Ritter declares. “There was no attempt to guard it and the pails besides the little scales used to weigh the dust. It was common for any storekeeper to have $3,000 or $4,000 in gold dust in his home.” And she like many another homesick person sits in her comfortable home in Denver and longs with softened eyes for the days of her childhood and primitive Nevadaville.

These are the nineteenth-century postmaster duties, according to National Archives article in the NGS News Magazine by Claire Prechtel-Kluskens: The postmaster position was a political appointment and a position of trust. The postmaster handled money. Upon taking charge of the post office, he would inventory all its property and the mail on hand. All postmasters were required to appoint an assistant postmaster to do his work in case the postmaster was absent, traveling, sick, dead, or tendered his resignation. Often the assistant would be the postmaster’s spouse. The postmaster sorted and bundled the outgoing mail. The receiving mail was sorted and the postage checked to make sure none of the letters were over or under charged. In addition, there were quarterly reports to be made to the Postmaster General.

Mr. J.W. Ratliff was also the treasurer of the public school in Nevadaville, and the secretary of I. O. O. F. Nevada Lodge No. 6. At its height, the public school had a total student population of approximately 300 students. They were taught in a four-room, one-story school building. As treasurer, Mr. Ratliff would have been in charge of the payroll, finances, and filing reports. As secretary of Nevada Lodge No. 6, besides his duties as secretary, Mr. Ratliff would travel to neighboring lodges and was a delegate to Denver. The photo of a document was from Mr. Ratliff inviting the brethren in Central City to Nevadaville for the 1897 Fourth of July celebration in Nevadaville.

In late 1897 or early 1898, Mr. Ratliff moved to Denver and a new postmaster was appointed. The Denver Directory listed Mr. Ratliff’s occupation as retired. He passed away in 1899. The Bald Mountain Post Office now had a postmistress, Mrs. Sadie M. Morse, who was appointed to her position February 11, 1898. According to a publication called A Concise Social and Business Review of the Three Principal Towns in Gilpin County, “She is a very estimable lady and has the respect and regard of all who know her. She gives careful attention to her work and is ever courteous and obliging. She conducts a small stationery store in connection with the post office.”

Other postmasters would run the Bald Mountain Post Office before the post office was discontinued on October 15, 1921. However, none of the postmasters served as long as Mr. Ratliff. In Central City located in the Gilpin History Museum, there is a display of a pioneer era post office, which may be similar to what the Bald Mountain Post Office was like.

END_OF_DOCUMENT_TOKEN_TO_BE_REPLACED

Where the dead get to tell their story By Jaclyn Schrock On Saturday, August 21, the Gilpin Historical Society held their annual Cemetery Crawl. Tickets allowed the shuttle of hundreds of guests from the Teller House parking lot to the Cemetery. Depending on v... END_OF_DOCUMENT_TOKEN_TO_BE_REPLACED