Bald is beautiful at Gilpin fundraiser 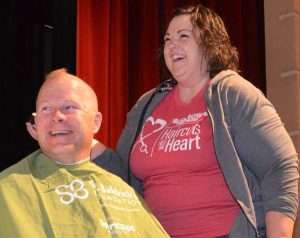 Gilpin’s third annual St. Baldrick’s rally to raise funds for childhood cancer research was held on Thursday, March 21, in the Gilpin school auditorium. The entire student body turned out to watch, cheer, and take photos as three of their classmates and several adults submitted to the clippers.

St. Baldrick’s Foundation exists solely to fund research for childhood cancer. Events such as the one at Gilpin are taking place all across the country this month to coincide with St. Patrick’s Day. The first St. Baldrick’s event was held in 2000 at a St. Patrick’s Day party. The Foundation raised over $35 million in 2018. So far in 2019, over $19 million has been raised.

$2,500 was raised at the Gilpin event this year, not as much as hoped, but enough to make a difference. Teacher Dusty Newberg, the school’s St. Baldrick’s liaison, said $1,300 had been raised prior to the big day.

“There was a joint venture between the Student Council and the Honor Society students,” she advised. “They spent a month raising funds and encouraged people to get involved and seek outside contributions, including on-line donations.”

Newberg said $550 more was raised in 2019 before the event than the previous year, and she hoped the fundraiser would continue to grow.

As the kids got settled in the auditorium seats, Gilpin County Sheriff Kevin Armstrong donned his traditional green St. Baldrick’s hat to emcee the happening.

“Last year, you raised $5,600 for children’s cancer research. Congratulations on a great job!”

Amid excited applause at this announcement, Armstrong fired up a St. Baldrick’s YouTube video on the stage’s large screen that gave the facts about childhood cancer and what the Foundation is doing to fund research.

“Every two minutes, a parent somewhere in the world hears the words, ‘Your child has cancer,’” the Foundation informed. “A parent’s time is torn between hospital, home, and work. A child with cancer misses school and spending time with friends. Treatment takes over their life. A child is exposed to harmful radiation. They lose their hair, limbs are removed, and organs are cut out. The path to survival is a brutal, dangerous road. Sometimes, cancer does have the last word.”

The Foundation stated that one in five children diagnosed with cancer in the U.S. and Canada will not survive. Two out of three survivors will develop long-term effects from the very treatment that saved their life – things like learning disabilities, hearing loss, heart disease, infertility, and even secondary cancers.

However, researchers around the world have ideas to change the course of childhood cancers, such as smart medicines that target only the cancer and don’t poison the rest of the body, treatments personalized for each child’s genetic makeup, early detection and prevention, and finding and stopping the cancer before it attacks.

“The only way to make this possible is to fund research. When you make a donation to the St. Baldrick’s Foundation, you fund the very best childhood cancer research in the world,” the Foundation pleaded. Treatments developed in one locale can help a child elsewhere. Revolutionary research in one country could fuel breakthroughs in another.

“Children with cancer will have safer, less painful, and more effective treatment. They will go to school, grow up, start a family of their own, and do great things.”

The story of young Hazel Hammersley followed. As a toddler, Hazel was diagnosed with cancer in April 2013 with stage three, high-risk neuroblastoma. She underwent surgery, chemotherapy, a stem-cell treatment, days of radiation, and six months of immunotherapy. The doctors proclaimed her cancer free in September 2015, and a year later she celebrated two years of being cancer free. Shortly after, at Hazel’s regular quarterly scan, her parents got word that there was something on the scan. Hazel’s cancer had returned.

As Hazel and her family got St. Baldrick’s haircuts in the video, viewers were told that part of Hazel’s treatment involved an FDA-approved drug called Unituxin, developed with support from St. Baldrick’s.

Her mother said that research was crucial in saving their daughter’s life the second time around. She was thankful for St. Baldrick’s doing so much that they as parents couldn’t do on their own. She hoped Hazel could grow to live a long, healthy, and full life.

After showing the sobering but hopeful videos, Armstrong encouraged the kids to do something they were passionate about in order to help others.

“I’ve been doing the head shaving for cancer research for over ten years,” he said. “It’s something I’m passionate about. What could it be for you? Rescuing animals, the Make-A-Wish Foundation? Get involved and help a charitable organization. Make a difference in someone else’s world.”

Armstrong noted that Gilpin student Aiden Zeilbeck had been diagnosed with cancer at age five. The audience was thankful to learn that their friend had been cancer-free for the past seven years. Armstrong also acknowledged that many members of the student body have been impacted by a friend or relative with cancer.

“Now – you guys want to see somebody get their head shaved?”

Armstrong called up the three students who were ready to brave the shave: Esmee Halsted, Abby Parton, and Tony Rumer. The students’ parents had signed permission slips agreeing that their kids could lose their locks.

Esmee stepped to the mic and told the crowd, “My grandma had cancer. I’m dedicating this to her.”

Abby spoke of the children who were suffering and said, “I want to try and help them out.”

“I’m getting my head shaved for the support of those less fortunate,” Tony commented.

The young people were soundly cheered by their classmates.

Abby and Esmee were seated and draped with green St. Baldrick’s gowns as their friends got ready to video the deed on their phones. Tony soon followed. Barbers Denise King and Bethany Truck of Sports Clips in Evergreen, who re-upped to donate their time for the third year, took clippers in hand and went to work.

As pulse-pounding music played, the youth submitted to the spotlight good-naturedly, if a bit nervously. After the three were done, they were thanked and praised, and their new look was admired by all.

Paul Hanson, a teacher at Gilpin County School, was awarded a medal for being the top fund-raiser with $501 in donations.

“I think it’s a good cause. My hair will grow back,” he smiled.

Stephanie Wagner, a firefighter with Central City Fire Department, got her head shaved. She had done so in 2018 as well, in remembrance of her grandmother, who passed away of cancer only a short time earlier. Wagner also had a co-worker who had a child with cancer.

Other participants included Brian Gross of the Wheat Ridge Police Department, who worked with Armstrong when both were members of that department several years ago. Armstrong and School Resource Officer Lee Ramsey were also shorn.

Thanks went to Cherokee Blake and Lyssa Gray from the Gilpin County Sheriff’s Office for helping with logistics, teacher Dusty Newberg, Eagle Student Council and Honor Society, and Denise King and Bethany Truck of Sports Clips.

St. Baldrick’s urges us all to get involved, and there are more ways to help than just getting your head shaved. For more information, see www.stbaldricks.org.