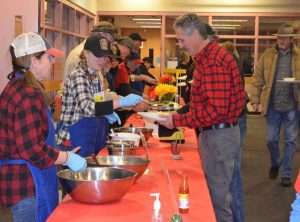 Chili beans and bidding for benefit of Timberline Fire and GCART

The High Country Auxiliary (HCA) stepped up to the plate – or bowl – once again for its annual chili dinner and silent auction to raise funds for Timberline Fire Protection District (TFPD) and Gilpin County Animal Response Team (GCART). The event is the HCA’s largest fundraising event each year. Its other fundraisers are a flea market in June and a pancake breakfast at the Gilpin County Fair, taking place in July this year.

Despite wintry weather, this year’s dinner and auction seemed bigger than ever. The group served chili with all the accoutrements to 311 guests at the Gilpin Community Center on Saturday evening, March 2. Bidders circulated among 400 diverse auction goods and services, pepped up by the lively beat of golden oldie tunes rocking from speakers positioned on the overhead running track.

More than 50 volunteers, including 20 from TFPD, helped cook, set up, take admission, serve, run the auction, and clean up, said HCA’s Susan Keim-Tamm. Volunteers also spent many hours over the past year gathering donations from individuals and businesses and cataloging the items for the auction.

Nearly $3,000 was raised during the event in meal sales alone, not counting the auction sales, which will take a while to tally.

HCA is a non-profit group that was organized to aid and support TFPD, GCART, and other emergency service organizations that serve our community. Its members provide meals, water, and other support at the scene of fires, rescues, or other emergency events. HCA also gives financial help, scholarships, and assistance with fund raising events as requested.

Auction volunteer Wanda Sundquist commented on the HCA roster. “We have close to 50 volunteers – far and away the most we’ve ever had,” she reported.

TFPD and GCART do not have any specific requests of HCA funds at this time. Tamm said, “We are currently making meals for Timberline’s training classes and replenishing emergency food supplies.”

HCA donations to TFPD for 2008-2019 total $157,260. Funds from 2016-2018 alone have helped our first responders with service awards, EMT classes and scholarships, food for EMT training, Timberline uniforms via the Meister Foundation, emergency food supplies, kids’ promotional safety items, half the cost of a radio tower project, and wildland gear.

TFPD and GCART leaders provided updates on their organizations’ activities. Chief Paul Ondr expressed appreciation for the community’s support of the fire department and the auxiliary and provided news of the district’s activities.

“Timberline continues to work to ensure our citizens and visitors are safe,” he advised. “At the end of February, our 2019 fire academy started, with eight Timberline and three Central City firefighters attending. We recently had four graduates from our in-house emergency medical responder course.”

TFPD has hired a full-time wildland coordinator, Capt. Mike Keil, whose main duty is ensuring that the district is prepared for the wildland season ahead. Deputy Chief of Volunteer Services Chris Bondus was also hired; this position is 100 percent federal grant funded. Bondus is tasked with making certain that the volunteer firefighters have everything they need to succeed and carrying out recruitment and retention of new volunteers.

Ondr invites those interested in volunteering with TFPD to call 303-582-5768 ext. 5, or email cbondus@timberlinefire.com.

GCART’s purpose is to see to the welfare of domestic animals in emergency situations. Members assist firefighters in the evacuation of large stock animals and smaller companion animals in the event of wild fire or other disaster that may happen in Gilpin County.

Vicki Nemec, Gilpin County representative for GCART, reported, “GCART folks needed better fire protection. We received a grant from the Alan Green Memorial Foundation for $1,900 for personal fire equipment. This is a tent that the GCART worker crawls into if there is fire surrounding them.”

Members also hope to get new trainings this spring and to attract more people to join. Currently, there are 30 on the volunteer list, with about a dozen who are very active.

As the auction got into full swing, eager bidders perused about 300 articles and more than 100 gift certificates. Linda Skeen was auction coordinator, efficiently choreographing the many volunteers who tallied bids, took payments, and rounded up the items won by bidders. She and the auction committee worked very hard the entire year to improve everyone’s auction experience. More cashiers were enlisted to expedite the checkout, and a new “rolling auction” format was tried.

“There are three phases to the rolling auction,” Skeen explained. “Bidding closes first for items on tables with red tablecloths. Ten or 15 minutes later, bidding closes for articles on the white tablecloths. Finally, bidding stops for objects displayed on the blue tablecloths. It will extend the bid time by 25 minutes and hopefully make things run more efficiently.”

A “Buy It Now” component was also offered, which worked well last year. People could purchase certain items immediately without competing with other bidders. Skeen called attention to a striking Buy It Now item, an IBM master grandfather clock from the Fritz Peak Observatory, valued at $600 and selling for $500. The clock is still looking for a good home.

Items not receiving bids were placed on a “last chance” table with hopes they would find a buyer. Unclaimed objects will appear at HCA’s flea market this summer or at next year’s auction.

Armstrong was pleased that the area first responders have formed a cohesive group that work together and recalled a couple of situations during the past year where HCA was instrumental in providing assistance to those organizations.

“Last April, one of those late spring storms had come in, and we needed to do a mountain rescue on a guy with a broken leg. He was four miles in on Rollins Pass. The Auxiliary was so helpful, providing food and hot drinks.”

HCA was also on the scene helping with beverages and snacks as TFPD firefighters responded to a house fire in the Dory Lakes area last Christmas.

Although the HCA auction is always a great success, the sheriff noted that unfortunately, the 2018 auction was marred by people taking items without paying for them and hiding bidding sheets. He suggested that these were likely not local residents. This year, squads of firefighters acted as security, moving among the tables and keeping an eye on things.

END_OF_DOCUMENT_TOKEN_TO_BE_REPLACED

Where the dead get to tell their story By Jaclyn Schrock On Saturday, August 21, the Gilpin Historical Society held their annual Cemetery Crawl. Tickets allowed the shuttle of hundreds of guests from the Teller House parking lot to the Cemetery. Depending on v... END_OF_DOCUMENT_TOKEN_TO_BE_REPLACED

Benefitting the county, schools, and much more By Don Ireland   This year marks the 30th anniversary of casinos opening in the former little mining towns of Black Hawk, Central City and Cripple Creek, Colorado. In those early years, smoking was allowed inside ... END_OF_DOCUMENT_TOKEN_TO_BE_REPLACED