Art in nature – impression of a city 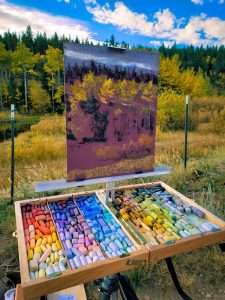 The mercury hung at 30 degrees as early morning sunshine cascaded through Gregory Gulch embracing leaves of yellow, orange and red, on Friday, September 27. A handful of early morning travelers squinted into the sun during their descent making it difficult to discern the bundled beings striking a pose gazing carefully into the distance with brushesin hand. Adjacent to the Century Casino garage, pastel artist Virginia Unseld held a steady brush using a less familiar oil medium to reproduce the glory of the early morning sun lighting the hillside, before her line of sight would be obstructed when the morning buses park to await their next run. Unseld, and many other artists, began producing scenes around town to silently herald in the second annual Plein Air Festival sponsored by the Central City Opera.

Plein Air is a French tradition of painting outdoors which presents unique challenges to an artist. Many painters take photos or make quick sketches of desired subjects and then paint from the photo or sketch. It takes time to create a great piece of art and while you paint, the stubborn earth refuses to stop turning causing the shadows and lighting to continually change. The plein air method was practiced by impressionists such as Claude Monet, Pierre-Auguste Renoir, and Camille Pissarro. Today, plein air festivals carry on the tradition and are held around the world and in Colorado in Boulder, Telluride, Grand Lake, and more recently Central City. Assistant Director of Development for the Opera, Clare Mail, organized the event as a way of broadening the arts in the City. The seasonal Opera is interested in extending the arts beyond the summer months they are constricted to due to lack of heat in the Opera House. The Opera Board is meeting the challenge by leasing the Teller House to Joe and Kara Tinucci for their restaurant, leasing the Williams Stables to the Peak to Peak Players, and sponsoring events beyond the opera season such as the Plein Air Festival.

This event brings artists from across the country; Karen Cooper from Grinnell, Iowa, Denise Gilroy from Naples, Idaho, and Jean-Pierre Jacquet from Greenwich, Connecticut, and artists from around the state; Jody Kauflin from Telluride, Mark Akins from Grand Junction, and Shelley Howard from Denver, just to name a few. The works created during the weekend are judged and awarded prizes Sunday evening. A tent was erected on the lawn of the Penrose House on Eureka Street where children of all ages can freely experiment with their own art. During the weekend, the Opera also hosted tours of buildings in Central City and the Bald Mountain Cemetery, giving glimpses into the shells of casinos past sparking the imagination with stories of former owners and those who have passed. On Saturday at noon, a bell tolled the beginning of the quick draw competition. Nineteen artists propped open their easels along Eureka, Lawrence, and Main Street to create a masterpiece in 90 minutes. Patrice LeBlanc set the mood, playing classic tunes on her piano staged in the magnificent courtyard sandwiched between the Teller House and the Opera House. As the bell tolled 1:30, artists quickly packed up their pieces and walked them to the Opera House where they were judged by Gregg Chadwick, a contemporary painter who traveled to Central City for this event from Santa Monica where he lives and works. Chadwick’s current series depict American Railroads of which Colorado has several historic and picturesque iron horses. Chadwick associates the quick draw contest with Top Chef (reality show on Bravo TV) in which works are judged based on first taste. He quickly tasted all nineteen entries and awarded the artist that best portrayed the colors and flavor of the town. Virginia Unseld, a pastel artist whose award winning work is well-respected in the community, knew coming in that she wanted to capture the staircase between the Gilpin History office and the Masonic Lodge leading up to East First High Street, but was dismayed to discover construction on the staircase was moved up to this weekend; and so she chose to climb up Eureka to a rickety looking staircase leading to a historic home. As fate would have it, that portrayal is what caught Chadwick’s eye. Gregg Chadwick judged well, because no sooner had the award been given out then Unseld’s painting was sold to a spectator. All the art produced during the weekend was up for sale and many pieces are now displayed in the Gilpin Arts Association gallery in Washington Hall.

A beautiful weekend for weather created the perfect backdrop for beautiful art. The Plein Air Festival is an amazing thing to see. Artists are more than willing to talk to spectators about their pieces and their approach or philosophy behind their art; and Central City is a wonderful canvas to be inspired.

END_OF_DOCUMENT_TOKEN_TO_BE_REPLACED

Where the dead get to tell their story By Jaclyn Schrock On Saturday, August 21, the Gilpin Historical Society held their annual Cemetery Crawl. Tickets allowed the shuttle of hundreds of guests from the Teller House parking lot to the Cemetery. Depending on v... END_OF_DOCUMENT_TOKEN_TO_BE_REPLACED

Benefitting the county, schools, and much more By Don Ireland   This year marks the 30th anniversary of casinos opening in the former little mining towns of Black Hawk, Central City and Cripple Creek, Colorado. In those early years, smoking was allowed inside ... END_OF_DOCUMENT_TOKEN_TO_BE_REPLACED