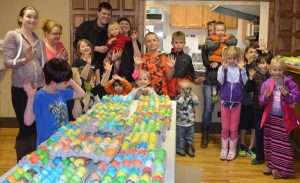 Question: How many Easter eggs can you put in an empty basket?

Answer: Only one. After that, it’s not empty anymore!

First, though, they had to dye the eggs, which is eggs-actly what they did at the Elks Lodge in Central City on Thursday evening, March 29. The 90 dozen eggs were likely the most ever colored for this annual occasion. Sysco and Dostal Alley Casino donated the eggs, and the Century Casino boiled them.

A good-sized crowd of kids, parents, grandparents, and Elks volunteers filled the Lodge, and just about everybody got in on the fun. The boys and girls splashed their eggs into ceramic mugs filled with brightly colored dye. Older kids had learned to be fairly neat, but tiny novice egg artists ended up purple, pink, and green from their fingertips to their shoulder blades.

The youngsters had plenty to say about their favorite part of Easter.

Lila Blake, also age four, spoke for many of us when she said, “My favorite part is the candy!”

Voorhies stated, “I’ve been doing this for more than 20 years. I do it because I like the kids!” She gave everyone a heads-up that if it was snowing on Saturday, the egg hunt would be at the Lodge instead of the park.

“Check ‘You Know You’re From Gilpin County’ on Facebook,” she advised.

Unlike last year, when the Lodge did end up being the site of the hunt, the weather was fair but chilly. Everyone converged at the park and waited for the traditional hour of 11:00 a.m. to start stalking the colorful prey.

One little girl of about two grabbed a pink egg from the playground area before the starting signal sounded.

Right. With a grin and a giggle, the little pixie darted away with mom in hot pursuit.

It’s hard to wait. Finally, Shirley Voorhies hoisted her iconic megaphone and shouted “Go!” Kids five and under grabbed eggs from benches and swings and from under slides and the little wooden bridge at the playground. Children from six through 12 charged up the hill to pluck eggs from rocks, grass, and shallow snow banks. In moments, it was all over.

The Elks volunteers were bountiful in giving out treat bags to everyone and also had plastic eggs that were redeemable for special prizes. These included stuffed animals, children’s books, modeling dough, coloring books and crayons, dolls, bubbles, mazes, and grand prize baskets with all kinds of goodies.

END_OF_DOCUMENT_TOKEN_TO_BE_REPLACED

Where the dead get to tell their story By Jaclyn Schrock On Saturday, August 21, the Gilpin Historical Society held their annual Cemetery Crawl. Tickets allowed the shuttle of hundreds of guests from the Teller House parking lot to the Cemetery. Depending on v... END_OF_DOCUMENT_TOKEN_TO_BE_REPLACED