Angling on the spectacular Grand Mesa 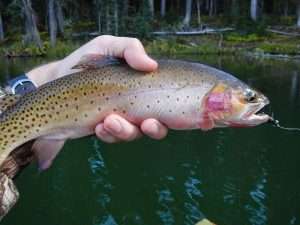 Just 35 miles south of off I-70 in Mesa County there’s a place that has stood against the test of time. A place so magical, it has been the destination of choice for millennia. The Ute Indians called this place Thigunawat the “Home of Departed Spirits” or Heaven. Today we know it as Grand Mesa on the map, author Muriel Marshall called it “The Island in the Sky” in her book by the same title. At over 10,000 feet in elevation, 800 square miles sits on top of the world’s largest plateau that is an outdoor enthusiast paradise. Within that vast area, there are over 300 lakes, eight reservoirs, and numerous streams. It is a place where the angler can experience some of most breathtaking scenery while practicing the ancient art of fishing.

Driving up to the Mesa, can be two totally different experiences. One is on the dirt roads, a bone-jarring ride that will have your vehicle begging for mercy, making noises you’ve never heard before due to the washboard roads. The paved road is not nearly as dynamic as the unpaved route, but it does have the occasional heave of the road or an area of pavement damage. These serve as a reminder to the visitor that the Mesa and her harsh winters rule the land.

Once on top, the view is spectacular at all directions. On the north and west is the vast Colorado River drainage. On the south and part of the west side is the Gunnison River drainage. East is the Crystal River Valley. The vastness around Grand Mesa gives us an idea of really how small we are in the entire scheme of things. As a bonus, cell phone service does not exist in most areas on the Mesa.

Fishing at on Grand Mesa is also another amazing experience with trout, splake (a hybrid of a male brook trout and a female lake trout), and grayling heavily stocked in eight of the 300 lakes, and native fish are at home to most of the remaining lakes. Some  lakes are flies and lures only and have size and length restrictions while others have no restrictions other than possession limits.

Cottonwood Lake is one such reservoir on the Mesa that is stocked and is regularly monitored by Colorado Division of Parks and Wildlife (CPW). The road into Cottonwood will shake you and your vehicle into pieces. Speeds vary from 2 mph to a whopping 15 mph on the better stretches of the road – all the time being cautious of animals, fallen trees and ATV’s.

Once at the lake, scouting around revealed that there are a fair amount of late summer insects hovering about just above the surface of the water. Mayflies with their telltale V shaped tails, mosquitos, and flying ants appear to be the angler’s choice of flies on this high mountain lake.

The cold of the morning makes you question if it was such a good idea to start fishing before the sun peaks over the trees. Action was slow in the early hours which allowed for time to brew up a pot of coffee and get a little breakfast. When the locals start showing up around 9 am and getting their fishing gear out, there was a feeling in the air that the action is about to pick-up and that feeling didn’t disappoint. During mid-morning, action started on mayflies, using a fly rod or a casting rig with a clear bubble with a variety of flies. Casting a silver Blue Fox Sonic also proved to be very productive as well as bottom fishing with Powerbait. Anglers in boats reported action by trolling with flashers or cowbells tipped with a worm. Action continued throughout the rest of the day and into the early evening using a variety of dark or black flies and silver colored lures.

Camping on the Mesa is primitive. There are several designated campgrounds that charge $12 to $18 per night. Most campsites are on a first come, first serve basis. Reservations are required at some of the more popular camping areas and cabins. For more info on Grand Mesa National Forest and camping, visit their website at www.fs.usda.gov/gmug. Most campsites have an outdoor privy, but not all have potable water. Free camping is available all over the Mesa in semi-designated camp spots. For a more civilized experience, Grand Mesa RV Park in the town of Mesa has a campground that offers full hookups. Rates are $44 per night for RV’s and cabins are also $44 per night.

Grand Mesa is well worth the 4-5 hours it takes to get there from Gilpin/ Boulder Counties. In late summer, peaches from the Palisade, Grand Junction area provide an additional bonus to an already incredible trip. After a trip Grand Mesa, “Red Leader” and I both feel recharged and relaxed. It is a pilgrimage we like to take at least once a year. It is a place that has a mystique all its own.

END_OF_DOCUMENT_TOKEN_TO_BE_REPLACED

Where the dead get to tell their story By Jaclyn Schrock On Saturday, August 21, the Gilpin Historical Society held their annual Cemetery Crawl. Tickets allowed the shuttle of hundreds of guests from the Teller House parking lot to the Cemetery. Depending on v... END_OF_DOCUMENT_TOKEN_TO_BE_REPLACED

Benefitting the county, schools, and much more By Don Ireland   This year marks the 30th anniversary of casinos opening in the former little mining towns of Black Hawk, Central City and Cripple Creek, Colorado. In those early years, smoking was allowed inside ... END_OF_DOCUMENT_TOKEN_TO_BE_REPLACED