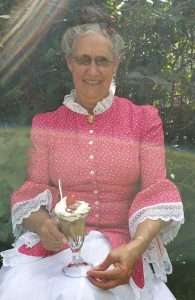 Presented by the Gilpin Historical Society

Gilpin Historical Society (GHS) held a Victorian Ice Cream Social at the Stroehle House at 231 Chase Street, Sunday, August 18, from 1-4 p.m. Thanks to the notifications in the community section of the Weekly Register-Call residents from the community enjoyed the refreshing homemade, organic ice cream. The serene setting on Chase Street invited folks up the street from Hwy 119 as children played on bikes and scooters in the street, like in days gone by. Black Hawk residential streets have many historical homes that were part of the neighborhood, drawing us back to a simpler era.

Coming up the stone steps of 231 to the side yard, guests found deep, lush, green grass shaded by narrow leaf cottonwood trees. From one who enjoyed Grandma Huffman’s double chocolate ice cream recipe, I felt as if I’d stepped back in time with family members in this small town setting.

The ice cream, shaded comfortable breeze, friendly folks chattering, and the deep grass set up for crochet took my husband’s memory back to his Grandpa Hight’s lawn which was rolled to keep it smooth like carpet. Like where his own father grew up in Morrison using a push reel mower, as well as eating the double chocolate ice cream, there were occasional lumps in the tall thick grass, similar to what we found on Chase Street in Black Hawk.

The grassy side yard, with multi-generations savoring a comfortable mountain summer day with ice cream, was a perfect setting for a four-some playing the lawn game of croquet. Croquet is believed to have spread through England as fast as smoke, originating in the 1600’s. There are associations that make rules specific about the game, but most of us remember playing in yards with neighbors or family.

Using a color coded wooden mallet to roll the same colored wooden ball through the grass was the challenge. Each player takes a turn to move their ball through the five main wickets (metal hoops) set like the five dots on a dice in the grassy game area. The beginning post has double wickets as does the ending wooden post. The ball must hit the multicolor post to begin and end the course. The double wickets are at a distance that makes it quite challenging to it the ball a second time if one stroke does not get you through both the first time.  The object of the game is to get your ball through the course, traveling the path designated with the least number of strokes. If your ball is hit by another ball, you may have to regain the location with many strokes to continue the course.

Since the front two rooms were remodeled to their original decor in 2015, GHS has hosted High Teas as the setting inspired history to live on. After the tea, guests would enjoy the side yard where traditional music and dramatic stories were told by/of local colorful characters. One character remembered was a man who lived 14 days when an underground tunnel trapped him. His story was told after living another 60 years.

However, GHS has taken a different turn this year by hosting family-friendly activities into the living museum experience at the Stroehle house. An ice cream social with croquet was a fun for all activity, rather than primarily for ladies remembering the high society tradition. Although it was free, donations for the historical society were gladly accepted.

The ice cream was served in traditional glass soda glasses, and toppings were optional. There were tasting cups, so that each flavor could be compared. The nine flavors of ice cream were the big hit. Choices included: Vanilla, Chocolate, Icy Peach, Mint, Strawberry Creme , Butter Pecan, Lemon Sprinkle, Malted Milk and Blueberry which were all organic and churned with rock salt and ice by Dave and Karen Beightol.

The Beightol’s had previously brought the burger place to us on Eureka Street as we entered Central City from Black Hawk. They sold the wild game burger restaurant a year ago and continue to specialize in drone photography and 3D imaging.

We all recognized the quality of their natural products. The ice cream is no exception to their expertise. They said the secret ingredient in their ice cream was arrowroot.

Why is arrowroot used in ice cream? Traditional, unprocessed ice cream recipes use arrowroot to produce the extra creamy quality found on Chase Street this week. The presence of arrowroot clearly qualified the ice cream as creamy and smooth with no residual after tastes. It is much like the quality Easterners demand as ice cream and frozen custard connoisseurs.

Only a teaspoon of arrowroot is used per pint of ice cream. Arrowroot is a white powder from grinding the tropical tuber of called Maranta Arundinacea, or arrowroot. It has no flavor, gluten, grain, is vegan and paleo friendly. Arrowroot, easily digested, can be used instead of corn starch. It is often found in Asian foods, sauces, soups and pudding. Arrowroot is best used to thicken foods if there is sensitivity to corn.

Modern ice cream often has excessive air added to the ice cream to make it lighter. We often find ice crystals present and a big challenge to scoop the sweet frozen treat. The 10 ice cream flavors at the GHS social were free of ice crystals, had amazing clear flavors, were easy to scoop, and were the perfect frozen treat.

These batches were aided in churning by electricity to make scrumptious summer treats. Between tasting scoops of ice cream many recalled having cousins take their turn at churning the hand crank ice cream maker. Other told of a smaller child sitting on the churn to keep it from tipping, as it easily could sitting in the tub of ice which was getting slushy. Another told of a device that put the ice cream mixture inside ice then incased in a ball to be kicked and tossed to get the churning done.

The Gilpin Historical Society aims to keep our local history connected to those who make their life here now. Using the Stroehle home as the setting to remember the ways local folks gathered for relaxation and fun, was ideal for the ice cream social.

Gregory Gulch where we travel from Black Hawk into Central City is the site of one of the original Gold strikes in Colorado in 1859. Central City, Black Hawk, Nevadaville, and Rollinsville remain today, while so many other communities based on mining vanished.

GHS reveals the characters, challenges, successes, failures and remains of the quick development of one of the few counties in Colorado Territory to have the same original boundaries. Gilpin Historical Society offers four museums to recognize the development of the steam train, mining science, technology and society of those times as the 1800 became the 1900s. Historical buildings and mines were nearly abandoned 60 years later, when mining no longer flourished.

Retaining our history and making the county a historical destination is part of many ventures in the area, strongly supported by the Central City Opera Association and revenues that gaming has facilitated. Yet we know Gilpin County as a thriving community in the Front Range of Colorado, which remembers the past with ice cream and family friendly games.

There are many buildings in the few cities of Gilpin County that are on the historical registry. One is the Stroehle House on 231 Chase Street. GHS was given the home as a generous gift of the original occupant’s cousin as their will requested establishing a permanent remembrance of historical life. The home is leased to tenants that make the traditional setting available to guests when GHS requests the use of the property for historical purposes.

We look forward to the Cemetery Crawl on September 7th and the Creepy Crawl in Central City building in mid-October. That is where more historic characters’ lives can be seen in Gilpin County, once again.

Thank you Gilpin Historical Society for the fun day on Chase Street!

END_OF_DOCUMENT_TOKEN_TO_BE_REPLACED

Benefitting the county, schools, and much more By Don Ireland   This year marks the 30th anniversary of casinos opening in the former little mining towns of Black Hawk, Central City and Cripple Creek, Colorado. In those early years, smoking was allowed inside ... END_OF_DOCUMENT_TOKEN_TO_BE_REPLACED