An incident at the Big Swede’s house in Central City 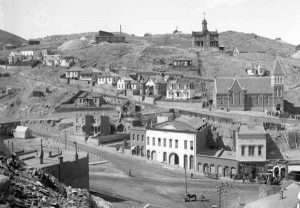 Saving a girl from an overdose of Laudanum in 1882

Ada Branch was a Madam, who ran a respectable parlor house, prior to Lou Bunch’s arrival in Central City. Ada, known as “Big Swede,” ran her business from the same house that Lou Bunch would one day occupy. The following Weekly Register-Call article from 1882, describes an attempted suicide at Ada Branch’s house on the “Hill.” The suicide involved the ingestion of Laudanum, a drug which was used primarily to cure sleeplessness. The strong opioid medication was also used as a pain medication and cough suppressant. Suggested dosages were measured in drops, anything more rendered the drug a poison. Notice that messengers are sent to bring someone in, and the girls don’t leave the house.

Louis J. Carter, former Central City resident and historian, sets the scene by explaining the role of the Madam and the Parlor House, in his book Yesterday Was Another Day.  “The two houses of ill repute were located in Central City on the south-west end of Pine Street, some few hundred feet below the Coeur De Alene Mine dump. As the houses were on a hill just above the City, the area became known as the “Hill.” The houses, in the parlance of the day, were known as “Parlor Houses.” They were furnished according to the décor of the day and were similar to other houses in the community.  There was also a dance floor and piano. Each house had a Madam, cook, piano player, and from three to seven girls. These personnel could change from time to time based upon financial returns. Sometimes it was necessary for the Madam to cook and one of the girls to play the piano.

The modus operandi of these houses was that which was common to the operating of “Parlor Houses” everywhere. The girls were dressed in conventional clothes, properly coiffed and highly perfumed and incensed. They were to conduct themselves with as much decorum as their avocation allowed. Their principal job was to get the boys to dance. After each dance the girl’s partner was required to buy a bottle of beer at the cost of one dollar. This bottle of beer cost the House fifteen cents. The one dollar was split twenty-five cents to the girl and seventy-five cents to the House. This was watched over by the Madam, who measured the girl’s worth to the House upon how many bottles of beer she could sell, and not upon any amatory proclivities she might possess.”

Last night about 10 o’clock a messenger reached Dr. Davidson’s office, almost out of breath.  It was some moments before the doctor could ascertain the reason for such hot haste. When the messenger had partially recovered respiration, he gasped out that a girl up on the hill at Ada Branch’s house of ill-fame had been drinking laudanum, and was about to turn up her toes. They wanted the doctor at once, and they wanted him to bring a pump.

“What house did you say?” anxiously inquired the doctor.

For God’s sake, make haste, for they all say up to now that they can’t stand a funeral, times are too hard.”

“How much did she take, do you know?”

“Don’t know, but hurry; the girl will croak before you get there. I will show you the way.”

“I must know something about the case so that I will know what to take with me. Is she asleep?”

“Bring a pump, they said. Think she has got about a pint in her.”

“How does she look?”

“Look, look! Did you say look? Well if I had time, I should ejaculate that she looks like she has been a corpse for about six months. I am not saying that she ought not have gone to paradise before that, but do-c, do-c, do come.  I-I am afraid the gal will cash in her chips. She is an old-timer and it won’t take much to lay her under.”

“What time did she take it?”

“Ten, but hunt up that pump and comalong at once.”

The doctor rustled around among his tools and finally came to a stomach pump and the two started.

The house known as Big Swede’s stands high up on Academy Hill and is conspicuous when the last rays of the sun have gone down over the mountains and the world is wrapped in shadows. Then it is that the place is brilliantly lighted, and the scintillations from the burners in the gilded chandelier send out a glow of cheering and inviting warmth over the hills that reminds the wanderer of a lighthouse seeing its rays over the billows. It might be a palace, but it is one of shame. It might be inhabited, but not by fairies. The fitting forms which have been seen through its curtains of lace were not the women who were as pure as snow and chaste as ice. But they were women and each of them wears the scarlet letter.

It matters not what may have sent them there. Man’s perfidy, he who makes a mockery of love and a toy of truth might be the cause of their shame. But there are many of them whose sins are as snow when compared to the scarlet stains of those who are continually preying upon virtue and turning it into vice. They might be outcasts, but the score of their sins when it comes to the final reckoning will not be as long by half as those who made them outcasts and then laughed at their crime.

When Dr. Davidson arrived at the place he found it in a whirlpool of excitement. Some of the girls were on the outside looking as if the day of doom had come, while others still were in the house trying to induce life to tarry for a while in the body of the poor girl until the doctor should arrive with his pump.

“She’s saved, she’s saved,” shouted one as the doctor appeared with his long pump, which to all appearances, was big enough and long enough to pump the water out of the Gunnell mine shaft. On the doctor went in his stoical way, seemingly intent on saving life if the pump would do it.

“Show me the room,” said he in sotto voice (under his breath). “Where is the girl? Give way there.”

“It’s the doctor, let him pass,” shouted the Big Swede from the end of the hall. Ascending a flight of stairs, he was ushered into a room, and prone upon the bed, with limbs almost rigid, he found the victim of laudanum, Emma S. H. Williams. He felt her pulse. It was fluttering.

“I fear she is gone,” said the doctor shaking his head as if doubting his powers to resuscitate her.

“Give her the pump, doctor,” said one of the frail creatures standing by the bed.

“No, no. Guess you might as well begin to change her clothes. Has she any friends?”

“Yes, yes. He’s downtown, and they say he is a mixer of decoctions and all that sort of thing, but I don’t know his name.”

“Decoctions? What do you mean by that,” asked Davidson.

“O, I mean a saloon keeper. I will go for him. No I will send for him.

The doctor in the meantime had thrown aside his pump and was preparing a strong emetic (substance that causes vomiting). The girl’s jaws were then pried open and the emetic poured into her mouth from a tin cup. She groaned and the doctor said, “If that does not bring her around you had better let her go in peace, for I can’t pull her back.”

He then left and the young man from downtown put in an appearance. There seemed to be some magnetism in his presence, for she at once showed returning signs of vitality, and in a few hours was able to open her eyes, and this morning was pretty near all right again.

The would-be suicide has been here for some time and doubtless made the effort to take her life through despondency. She took about two ounces of the poison.

END_OF_DOCUMENT_TOKEN_TO_BE_REPLACED

Benefitting the county, schools, and much more By Don Ireland   This year marks the 30th anniversary of casinos opening in the former little mining towns of Black Hawk, Central City and Cripple Creek, Colorado. In those early years, smoking was allowed inside ... END_OF_DOCUMENT_TOKEN_TO_BE_REPLACED