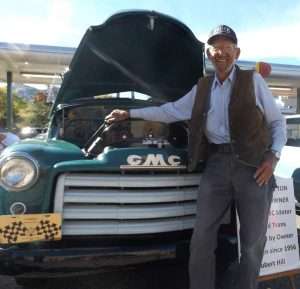 And His Extraordinary 53 GMC Pickup

Hill owns a 1953 GMC 3100 half ton that he purchased new in March of 1953. It is a split windshield, Juniper Green with cream trim with the standard gray interior. All the gauges and controls are original with the odometer reading 147,000 miles.

As the story goes, Mr. Hill worked in the construction trade building television towers and moved quite a bit to stay employed. Instead of renting apartments in the various towns where he worked, he figured he’d get a little ahead of the game and buy himself a 42 foot long trailer to live in. He could afford the trailer, but couldn’t afford the truck. The company the Hill worked for supplied him with a truck for some time so he was able to temporarily defer that purchase. Then he decided to leave that company to seek employment elsewhere. He and his wife Hazel were driving through Melbourne, Arkansas when he spotted the green GMC on a car transport in front of the GM dealer. Hubert made a comment to his wife” Did you see that pretty little pickup on that trailer? Mrs. Hill replied “Yeah, it sure was pretty.” He said he immediately made a U-turn on Main Street and went back to the dealer. In Hills words, “I had her about half on my side then, so I’d better move on this before she changes her mind.” An hour later they traded in their station wagon and were driving out of town in a brand new 1953 pickup. It remained his daily driver for several decades.

1953 GMC light duty pick-ups had very few visible upgrades from the 1952 models. Some slight changes in the 228 cubic inch inline or straight six cylinder engine resulted in improvements in performance and durability. The Hydromatic dual-range four speed automatic transmissions were offered for the first time in 1953. This particular pickup is a manual three speed with the shifter on the steering column, known as “three on the tree.” Mr. Hill and I joked about what a wonderful theft deterrent feature the three on a tree is because very few drivers have ever driven a vehicle with that type of shifter and if a person is unfamiliar with it, they won’t go very far. The retail price of a new 1953 GMC similar to Mr. Hill’s was $1,385. Today, retail for a ‘53 GMC half-ton pickup in this condition is around $52,000 (according to NADA), if you can even find one.

At some point when no longer needed as his daily driver, Hill stripped the truck down to the frame, repainted all the parts, rebuilt the motor and restored the pick-up back to her former glory. He installed hardened valve seats in the motor so it can burn unleaded gas without damage to the engine, but other than that, it is all original right down to the radio which is the Delco AM push button type that was offered as an option in 1953. Hubert also shared some interesting details about GMC trucks in general. “Chevrolet and GMC trucks are not the same even though they look similar going down the road, and a tried and true GM truck fan can tell the difference some distance away,” according to Hill. He continues, “The right door is the only one with a key lock for two reasons. It allows the gentleman to open the ladies door first, after which she can slide over to unlock the driver’s door. The second reason is it also keeps the driver on the sidewalk and out of traffic when unlocking the truck. He states that if a ’53 GMC has a key lock on the left side, it is a modification done by a previous owner and he doesn’t know any better.

Hubert Hill has been a Golden resident since 1956. His family-owned business, “Five R Trailers and Trucks,” has been in business at the same Colfax location for about 40 years. By the way, the average time a person stays with the same job is 4.2 years⁴, so that makes Mr. Hill extraordinary in yet another category. Hubert also mentioned that the shop is featured on the TV feature, “The Lifted Life” that airs on Saturday Mornings, on the Velocity Channel. With all he has going on, it’s a wonder how he found time to attend the final Golden Supercruise car show of 2017 in October.

In this world of fast internet, fast food, fast relationships, and instant gratification, it is a pleasure to meet an individual who has dedicated so much time restoring and caring for his truck and the pristine green GMC pick-up reflects this dedication. It has served him with many years of trouble-free transportation through the hard times and the not-so-hard times in a day which the average lifespan of most vehicles on the road is eleven and a half years⁵.

END_OF_DOCUMENT_TOKEN_TO_BE_REPLACED

Benefitting the county, schools, and much more By Don Ireland   This year marks the 30th anniversary of casinos opening in the former little mining towns of Black Hawk, Central City and Cripple Creek, Colorado. In those early years, smoking was allowed inside ... END_OF_DOCUMENT_TOKEN_TO_BE_REPLACED

Where the dead get to tell their story By Jaclyn Schrock On Saturday, August 21, the Gilpin Historical Society held their annual Cemetery Crawl. Tickets allowed the shuttle of hundreds of guests from the Teller House parking lot to the Cemetery. Depending on v... END_OF_DOCUMENT_TOKEN_TO_BE_REPLACED