An evening with Hazel Miller 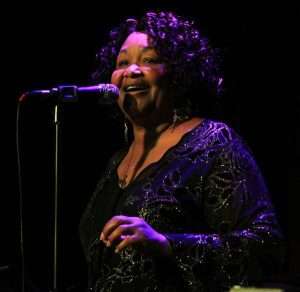 A Special Moment at the Monarch

When blues giant John Lee Hooker slapped my outreached hand during ChicagoFest at Navy Pier in 1978, it was one of those moments that stays with you. A devoted fan of the genre ever since, the blues and blues influenced rock would come to represent most of my record collection. I would see Muddy Waters, B.B. King, Willie Dixon, and Johnny Winter live. Koko Taylor, Etta James, Big Mama Thornton, Katie Webster, and Lou Ann Barton were and are my favorite female blues singers. To my ear, the pleasant tone of their voices smooths the pure rawness and add a satisfying dimension to the music.

One female blues performer I never had the pleasure of witnessing live is Hazel Miller. Sometimes called Denver’s Queen of the Blues and a unanimously regarded Colorado institution, she has lived here since 1985 and maintained a steady appearance schedule, both locally and internationally, to the benefit of her legions of fans. With a diverse repertoire that includes R&B, gospel, soul, jazz, and pop, she isn’t strictly a blues artist, but when she sings the blues it can be something magical. Hazel has opened for or performed with industry heavyweights such as: Big Head Todd and the Monsters, Mel Torme, James Brown, Temptations, Earl Klugh, John Hammond Jr., Peter, Paul, and Mary, Stanley Jordan, John Mayall, Charlie Musselwhite, Leo Kottke, Bob Weir, Herbie Hancock, Buddy Guy, Junior Wells, James Cotton, Lou Rawls, Rickie Lee Jones, James Taylor, and Spyro Gyro, to name a few.

Last Friday at the Monarch Casino in Black Hawk, CO, I would finally get my chance to see Hazel in person. Ben E. King’s “Stand By Me” soothed the senses. The Beatles’ “Come Together” was powerfully executed without the grittiness of Tina Turner’s version. An inspired Aretha Franklin medley followed that included “Chain of Fools,” “Respect,” “Freedom,” and “Think” stuck a soulful chord as she skillfully flowed through her play list. “Pride and Joy,” “I Just Wanna Make Love to You,” “Let the Good Times Roll,” and “It Don’t Mean a Thing If It Ain’t Got That Swing” electrified the house.

Upon talking with Hazel after her first set, it was immediately apparent through her effervescent personality her love of performing. She exuded the kind of happiness that I imagine comes from being very good at what she does, doing it often, and sharing her talent with the people. Star-struck and fawning, I expressed my fondness of her music and the blues. To my surprise and delight, she offered to sing a blues number on my behalf during the next set. Etta James’ “Something’s Got A Hold On Me” (Oh, It Must Be Love) was dedicated to me. Just like when John Lee Hooker slapped my hand, it is a moment I’ll never forget.

Hazel Miller and the Hazel Miller Band will be playing the Monarch Casino again on March 16th and 17th. To view touring schedule or purchase CDs, go to: www.HazelMiller.com.

END_OF_DOCUMENT_TOKEN_TO_BE_REPLACED

Benefitting the county, schools, and much more By Don Ireland   This year marks the 30th anniversary of casinos opening in the former little mining towns of Black Hawk, Central City and Cripple Creek, Colorado. In those early years, smoking was allowed inside ... END_OF_DOCUMENT_TOKEN_TO_BE_REPLACED