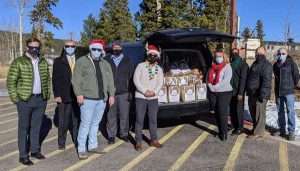 “2020 is a tough year for everybody,” exclaimed Ameristar General Manager Sean Demeule, “we have to improvise.” These words reflect changes many organizations are making as creativity abounds to provide services in a new and safe manner, and the Gilpin Seniors are no different.

Since 2008, Ameristar Black Hawk has partnered with the Gilpin County Seniors program to provide a festive holiday-themed meal in December. The capstone of every year, over ninety of Gilpin’s elder citizens would don festive outfits and joyously congregate in the Community Center common room to be served a delicious hot meal prepared by the banquet staff at Ameristar Casino & Hotel.

This year, on Wednesday, December 9, the Ameristar staff prepared to-go boxes of ready-to-eat meals consisting of hickory smoked turkey breast, mashed potatoes, green beans, sweet potatoes, stuffing, dinner roll, and strawberry shortcake. One-hundred-eight of Gilpin’s seasoned citizens made reservations this year and they paraded their vehicles through the north parking lot at the Community Center where they were greeted by several Ameristar staff with crinkles around their eyes indicating smiles hiding behind their masks handing out the bags of deliciousness.

“They really miss each other,” said Mary Ellen Makosky, Supervisor of the Gilpin County Senior Program, “they miss the friendship, the camaraderie” of being able to gather. Several folks planned to “gather” in their vehicles in the west parking lot when they picked up their meals just to catch up. The Gilpin Senior Program hosts congregate meals three days a week at the Community Center for the mature citizens during non-pandemic times. Makosky said this year was challenging to get the word out about the Ameristar meal since they have not been able to be together since March. She is used to interacting with the participants in the program through not only the congregate meals, but also weekly grocery shopping trips, monthly field trips, clinics, medical transports, and other activities; all of which have been temporarily halted. The Program is still able to deliver Meals-On-Wheels and provide market meal boxes which holds enough food for 14 meals. Another challenge for Mary Ellen was to plan the Ameristar Meal on a day that was not likely to have bad weather, but forecasting that far out is not easy. Someone must have been smiling upon their efforts, because Wednesday dawned bright with nary a cloud in the sky, the wind remained calm and the sun spread its winter warmth in mid-county Gilpin ensuring a great turnout. “I’m glad the seniors were able to get out and participate,” said Makosky.

Although this year was not like any other year, many of the enduring elders expressed their gratitude; the “meant a lot” to them. Mary Ellen received many phone messages and emails asking her to be sure to thank the Ameristar for them. Makosky also expressed her thanks to Ameristar for doing this “especially this challenging year.”

END_OF_DOCUMENT_TOKEN_TO_BE_REPLACED

Where the dead get to tell their story By Jaclyn Schrock On Saturday, August 21, the Gilpin Historical Society held their annual Cemetery Crawl. Tickets allowed the shuttle of hundreds of guests from the Teller House parking lot to the Cemetery. Depending on v... END_OF_DOCUMENT_TOKEN_TO_BE_REPLACED

Benefitting the county, schools, and much more By Don Ireland   This year marks the 30th anniversary of casinos opening in the former little mining towns of Black Hawk, Central City and Cripple Creek, Colorado. In those early years, smoking was allowed inside ... END_OF_DOCUMENT_TOKEN_TO_BE_REPLACED