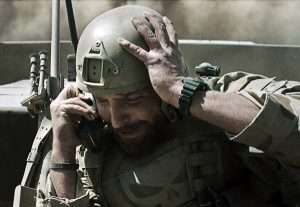 Chris Kyle’s memoirs come to life on the big screen

Director Clint Eastwood (Jersey Boys, Million Dollar Baby, Unforgiven) set his sights on Chris Kyle’s story, but it was Bradley Cooper’s (American Hustle, Silver Linings Playbook, The Hangover) intense focus on the story that pulled the trigger to make American Sniper a big-screen movie. American Sniper is an adaptation of Kyle’s autobiographic memoirs of the same title and tells Kyle’s story from his enlistment in the Navy to his post-military life with exposition sequences revealing his motivation for his actions. Eastwood maintains focus on the effect Kyle’s job and decisions have on his personality and mental stability. Kyle trains to be a sniper for the Navy Seals and works four tours of duty in the Middle East. During the first tour, Kyle’s precision and quantity of kill shots create a legend and his name is quickly known among the troops. Kyle chooses to return three more times to help protect the troops and to finish the job, but throughout, Kyle’s mental stability begins to erode and it is during the fourth tour that he breaks down and wants to come home permanently. Kyle had met and married his wife, Taya, before his first tour. The repeated tours and infrequent time home put a strain on their relationship that took a whole lot of patience, understanding, and forgiveness to get past. The movie completes Kyle’s journey back to healthy wholeness allowing him to help other veterans during his post-military life.

The brilliance of Clint Eastwood’s directing style allows this film to take you on Chris Kyle’s journey without reducing the heroic impact of the Navy Seals’ involvement in the Middle East. There have been many controversial things said about Kyle’s autobiography including lawsuits won by the accusers. Apparently, Kyle has a penchant for exaggeration which is why Eastwood chose to focus only on those incidents that are proven accurate, leaving out the controversy of Kyle’s mostly post-military life story. Like a history book, the story is stripped away of those distracting, but ultimately unimportant, details and gives you a glimpse into the key elements of the narrative. As director, Eastwood chose to include some things to embellish the story for dramatic effect. For instance, the movie depicts Kyle’s first kill as a child carrying a grenade followed quickly by the child’s mother. In reality, it was only the woman that Kyle shot. The impact of that first shot; however, was the same. It saved multiple lives, but ate away at Kyle’s conscience. Eastwood chooses to include a cheating girlfriend in Kyle’s backstory, but that tale never appears in Kyle’s autobiography. Another choice of Eastwood’s, and I find this one odd, is that the movie implies Kyle’s motivation to join the Navy was the bombing of American embassies followed by the Twin Towers attack of 9-11. According to the memoir, Kyle had planned to join the military all along, but took some time to be a rodeo cowboy before enlisting. An injury put a halt to his rodeo days leading him to following his intended career path. I don’t know why this embellishment on Eastwood’s part was necessary. Does he believe no one in their right mind would want to enlist in the military without some sort of catalyst? As with any career, there are multiple reasons why people enlist in the military and for some, it is something they just want to do. An apparent editing oversight shows Kyle talking on the phone from Iraq to his wife in California while the sun is shining brightly in both locations. Considering they are 11 hours apart, it is extremely unlikely that the calls were made in the few moments of daylight from both ends of the day. A couple of things that stand out in Eastwood’s direction include the opening sequence and closing credits. Before you see anything but the Warner Brothers logo on screen, you can hear the Muslim call to prayer along with a deep bass rumble. Those two sounds together make the audience uneasy and set the tone for much of the movie. The opening sequence shows Kyle setting his sniper rifle sights on a young boy and his mother setting the scene for his first kill. When the rifle goes off however, it is the hunting rifle of a young Chris taking down a deer in the woods, revealing the sniping talent from an early age. [Spoiler Alert] The movie concludes with Kyle’s death due to a firing range accident followed by the funeral procession and graveside ceremony. During the procession, you can hear a single mournful trumpet, not playing taps, but another sad tune, which can be heard until the credits role. Only one other movie that I know of (Monty Python and the Holy Grail) does what Eastwood chose to do; role the credits without any sound whatsoever. This effectively created a moment of silence in the theater in honor of Chris Kyle and a fitting tribute to his heroism.

This movie is rated R for war violence and some adult themes. There are liberal uses of the ‘f’ word which is expected during war, but there was just as much use of it by state-side civilians as deployed troops. Hollywood seems to think everyone in the West talks this way, but in my experience, there are only a handful of people that have no filter on what they say or have such a poor adjective vocabulary, they have no other way to describe their feelings and observations. I could go on, but that is an editorial for another day. In American Sniper, there is more than one opportunity for nudity. With an R rating, few directors would allow that opportunity to pass, but Eastwood chooses to remain tasteful in his depictions of the relationships. I think this was a wise choice, because the discomforting voyeurism of watching two strangers having sex would be a distraction from the discomfort you feel regarding a sniper’s job. As I mentioned above, Bradley Cooper was involved in making this movie a possibility, but it might be interesting to note that Cooper trained for this role several months beforehand so that he could bulk up to Kyle’s proportions. At his peak, Cooper could deadlift 425 pounds which is exactly what he was doing for a scene in American Sniper in spite of the film makers’ suggestion to use dummy weights. This provides a definite realism in the movie as you can see Cooper’s muscles flex without aid of CGI. There are some obvious flaws in putting this movie together, but they are not integral to the story and do not compromise the enjoyment of the film. Altogether, this was a great movie with an important insight into a sniper’s job and how it could affect the soldier. In my opinion, this should not win the coveted Best Picture Oscar, but it certainly deserves a nomination. I rate this film four and a half out of five deep breaths.

END_OF_DOCUMENT_TOKEN_TO_BE_REPLACED

Benefitting the county, schools, and much more By Don Ireland   This year marks the 30th anniversary of casinos opening in the former little mining towns of Black Hawk, Central City and Cripple Creek, Colorado. In those early years, smoking was allowed inside ... END_OF_DOCUMENT_TOKEN_TO_BE_REPLACED