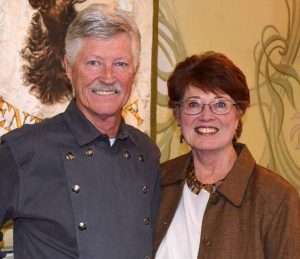 Public servant highly regarded as a good friend and neighbor

Alynn Huffman and her husband Gary gathered with family members, friends, and colleagues on Friday evening, December 28, at the Central City Elks Lodge to celebrate Alynn’s many years of dedicated service as Gilpin County Treasurer. The room was packed with folks eager to congratulate Alynn on her well-deserved retirement, which comes at the end of her final four-year term. Her last day in the office was Wednesday, January 2, 2019.

Mary Lorenz, who has served as chief deputy treasurer and deputy public trustee since 2003, was elected to the treasurer’s post in November and will be sworn in on January 8, along with other recently elected officials.

Well-wishers enjoyed refreshments as they reminisced about Alynn’s time in office and various activities they enjoyed together. The Huffmans shared highlights of Alynn’s life experiences and achievements and some humorous nuggets of Gilpin County memories.

In 1993, Peggy Woodford was the Gilpin County Treasurer and hired Alynn as a part-time office assistant. It wasn’t long before Woodford recognized Alynn’s skills and began grooming her for the post of chief deputy. When Woodford passed away, the Gilpin County Commissioners appointed Alynn as treasurer to finish Woodward’s term. Alynn ran in the mid-term election in 2002 and was elected.

She received residents’ property tax payments, released deeds of trust, handled foreclosures, and performed the numerous other duties her position required. As steward of the county funds, she vowed to maintain high standards of professionalism, honesty, and accuracy. For anyone who had a question or needed assistance, her door was open and her staff was ready.

She ran for reelection without opposition every four years.

“I guess everyone knew what the job involved and didn’t want it!” she joked. Or perhaps it was simply meant to be. In any case, Alynn filled her position with efficiency, integrity, and compassion for the duration of her tenure.

The work was often stressful and entailed long hours, but was never dull. Continual new challenges kept the job interesting and fresh over the years.

“There are always new things – you never know it all. Just when you think you are learning the job, the legislature passes something new for you to learn!” she said. She praised the Colorado County Treasurers’ and Public Trustees’ Associations as great networking resources and learning tools.

She added that it has always been important to work as a team with the Gilpin Clerk’s and Assessor’s offices, since so much of what they do is interconnected with the Treasurer’s office.

Alynn, named for her dad Allan, was born and raised in Des Moines, Iowa. She and Gary met in Creston, Iowa, at Southwestern Community College in 1969 and were married 48 years ago, on December 27, 1970. Alynn earned her Bachelor of Science degree in education from Northeast Missouri State University in 1973, but never did go into teaching.

“Alynn started out getting jobs in bookkeeping and accounting,” Gary noted. When the couple moved to Denver in 1976, Alynn worked for a CPA, then was employed with Sunrise Housing, a mobile home company. One day she made a startling discovery.

“She called me one morning to say there was a problem at work,” Gary related. “She had found two canvas bags with tens of thousands of dollars in each. I went with her to [the company owner’s] house, and she went in and put the money in his personal wall safe. She decided it was time to leave!”

She then worked another high-stress job in accounting and sales for a firm called EDP, flying around the country in a corporate jet.

Finally, it was time for a change of scene. The Huffmans moved to Gilpin County from Westminster in August 1993, and Alynn took a year-and-a-half off from working. Never one to remain unemployed for long, however, she decided to go back to work and applied at the Gilpin Treasurer’s Office, hoping to do something that was a bit more laid back than her previous jobs.

“I just wanted to answer phones and wait on customers at the counter!”

Her assertions notwithstanding, she soon took on the job as chief deputy treasurer.

Alynn presented a professional appearance in the office, wearing her wardrobe of business suits acquired in previous jobs. Her attire caught the attention of a long-time Gilpin resident, Sandy Hoffman, who noted dryly, “You’re not from around here, are you?”

Alynn felt that she might dress more casually and began wearing her jeans and cowboy boots to the office. Hoffman and another Gilpinite, Jessie Peterson, stopped in some time later. They looked Alynn up and down, then remarked, “Don’t get too comfortable.”

Contrary to this advice, Alynn began riding her motorcycle to work. Comfort was beginning to set in.

Gary recalled a tongue-in-cheek Gilpin legend: it takes ten years of living here before you are no longer considered a flatlander, twenty years to be considered “mountain folk,” and thirty years before you are fully accepted. The Huffmans are that rare breed who have been fully accepted, even though they have only lived here 25 years.

Gary spoke of his wife’s ability to connect with locals of all persuasions. “People with no county business would come in just to talk. She’s a Republican, but Democrats would write checks for her reelection. Many of the old-timers supported her.” He quipped, “Jessie and Sandy would come for the tax lien sales because Alynn had the best food spread for miles around.”

Gilpin County Coroner Zane Laubhan was one of those sharing memories. One year he and Alynn were running for reelection at the same time, both unopposed. They were sitting quietly at a pre-election event, not expecting to speak, and were surprised to be wittily introduced as “Death and Taxes.”

A favorite part of the position was getting to know the people of Gilpin County.

“It’s a small community, and we could cope together,” she commented.

The aspect of the treasurer’s job that Alynn liked the least was doing foreclosures. “I didn’t like foreclosing on people’s homes as public trustee,” she shared. “It’s hard when you know the people.”

Alynn assured that the county will be in good hands with Mary Lorenz, whom Alynn trained personally. “She knows the job better than I do. I’ve never run the office without Mary.”

Alynn gave credit to all the members of her staff, saying, “It takes teamwork to run this office.” She also noted, “I’ve enjoyed every day, but I’m looking forward to retirement!”

“I’m really happy that she’s able to retire,” Gary agreed. “It will be the first time in her life that she’s not in a high-stress job. She’s so excited!”

The Huffmans are both free from job responsibilities now; Gary retired from the railroad in 2003 after thirty years with Union Pacific and its predecessor companies. But neither is quite ready for a rocking chair.

The National Western Stock Show in Denver is coming right up January 12-27, and the couple will jump right into action to help out with the event.

“We’ve volunteered with the National Western Stock Show for the past eight years and will continue to do so,” Alynn offered. “We’ve worked with the jumpers and draft horses in the horse event center.”

Other plans include spending time with their children and grandchildren. The Huffmans’ two children are David, a college registrar, and Rayna, a helicopter pilot. David graduated from Gilpin High School in 1996 and Rayna in 1998.

Gary and Alynn also have plans to visit Florida in their RV with some friends and are excited to tour the county, seeing for the first time such locations as Niagara Falls, the east coast, and several historical sites.

Friends at the reception were happy to share comments about Alynn.

Kevin Armstrong: “She’s been ‘part of my family’ for a long time.”

Dick and Gail Lewis: “We’ve known her from working at the stock show. She’s always friendly to all.”

Dianna Wagner: “I’ve known her for the last five or six years from the tax work-off program. She’s a lovely, delightful person.”

Irene Kincade: “She’s one of the best friends I’ve ever had.”

Colleen Stewart: “As Gilpin Clerk & Recorder, it’s been a pleasure for me to work hand-in-hand with Alynn over the years.”

We all wish you well, Alynn, and hope you and Gary enjoy this next season in your lives. You’ll be missed in your official capacity, but it’s good to know that you’re still here as our friend and neighbor. Thank you for all you have done!

END_OF_DOCUMENT_TOKEN_TO_BE_REPLACED

Benefitting the county, schools, and much more By Don Ireland   This year marks the 30th anniversary of casinos opening in the former little mining towns of Black Hawk, Central City and Cripple Creek, Colorado. In those early years, smoking was allowed inside ... END_OF_DOCUMENT_TOKEN_TO_BE_REPLACED

Benefitting the county, schools, and much more By Don Ireland   This year marks the 30th anniversary of casinos opening in the former little mining towns of Black Hawk, Central City and Cripple Creek, Colorado. In those early years, smoking was allowed inside ... END_OF_DOCUMENT_TOKEN_TO_BE_REPLACED