All gave some – some gave all 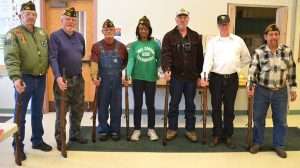 Local veterans and their families and friends gathered on Veterans Day, November 11, at 11:00 a.m. at the Gilpin County Community Center in a ceremony paying homage to all veterans and to remember those who passed away this year.

Teo Dominguez, U.S. Army (Ret.), commander of Gilpin’s American Legion Cody Thomas Post 166 and past commander of the VFW Stanley Nelson Post 7563, led the observance, which was held indoors due to inclement weather.

The rite is held annually at the eleventh hour of the eleventh day of the eleventh month to signify the end of fighting in World War I. An armistice was signed between the Allies and Germany that called for a ceasefire effective at 11:00 a.m. on November 11, 1918. That day became Armistice Day, a day to honor veterans of “the war to end all wars.” In 1954, following World War II and the Korean War, Congress changed the name to Veterans Day, and November 11 is now a day to honor veterans of all wars.

Following Dominguez’s welcome, Roy Blake, U.S. Navy (Ret.) led in prayer, requesting God’s blessings and the courage to work toward peace. “Grant that our pain may be mingled with the light of sacrifice for a better world.”

Dominguez commended the service of those who had fought in all wars in order to preserve our heritage. “Our determination made us better warriors. We fought with our minds and hearts, as well as our bodies.” He expressed gratitude to God and to the men and women who gave their lives. “Discipline and bravery were the foundation on which our nation was built. We must cultivate these virtues,” he said.

Dominguez recognized the military service of Paul Frasier, also known as “Paul Colorado,” who passed away a month or two ago and was a member of the American Legion. Frasier transferred from the Denver American Legion post to the Gilpin post and was made chaplain of Gilpin’s post; an appropriate position, as he was also bishop of his church in Idaho Springs.

The service of Norman Dufresne was also commemorated. Dufresne was missing in action since July 1950, during the Korean War. His remains were found in 2013 and identified through DNA tests. His great-niece, Laura Burtschi, was present at the ceremony. A brick has been placed in Dufresne’s honor on the Gilpin County Veterans Memorial at the Community Center.

A moment of silence was held for Frasier and Dufresne.

Veterans then conducted a simulation of a 21-gun salute, followed by the playing of “Taps” and the “National Anthem.”

The attendees adjourned to the Ameristar Casino, where they were honored with a complimentary lunch buffet.

END_OF_DOCUMENT_TOKEN_TO_BE_REPLACED

Where the dead get to tell their story By Jaclyn Schrock On Saturday, August 21, the Gilpin Historical Society held their annual Cemetery Crawl. Tickets allowed the shuttle of hundreds of guests from the Teller House parking lot to the Cemetery. Depending on v... END_OF_DOCUMENT_TOKEN_TO_BE_REPLACED