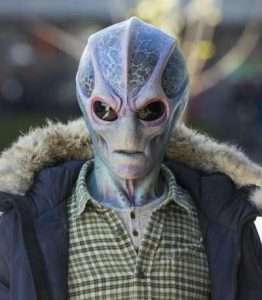 Harry Vanderspeigle (Alan Tudyk) is an alien scientist who has crash landed on Earth and disguises himself as a human doctor. He has a secret mission to kill all humans, but when Harry begins to assimilate into his new world he starts to wrestle with the moral dilemma of his clandestine operation. The series premieres Wednesday, January 27th at 8 pm on Syfy and USA Network. The show is based on the Dark Horse comic series of the same name created by Peter Hogan and Steve Parkhouse.

Welcome to the fictional Colorado town of Patience. Nestled in the Rocky Mountains, this sleepy little oasis with a population of 1,000 is hours from any large city, making it a great place for a stranded alien to go unnoticed.

Months after his unexpected crash, Harry is still looking for pieces of his ship and the missing payload that will allow him to complete his mission. He also has to find the body of the man he killed before the lake he threw him in thaws out. It would be awfully awkward if some local fisherman found a man that looked exactly like the human whose identity Harry stole. Oh yeah, and he needs to find time to murder the mayor’s kid because he’s the only person who can see through his disguise and see his true alien form. Harry has a lot on his plate.

END_OF_DOCUMENT_TOKEN_TO_BE_REPLACED

ShareTweetShare on Google+Pin on PinterestSend with WhatsApp
15 recommended

END_OF_DOCUMENT_TOKEN_TO_BE_REPLACED

Where the dead get to tell their story By Jaclyn Schrock On Saturday, August 21, the Gilpin Historical Society held their annual Cemetery Crawl. Tickets allowed the shuttle of hundreds of guests from the Teller House parking lot to the Cemetery. Depending on v... END_OF_DOCUMENT_TOKEN_TO_BE_REPLACED