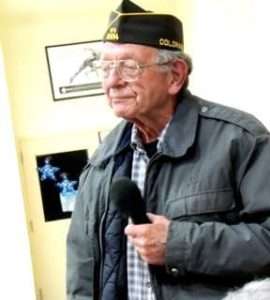 He was a generous man, a Korean veteran, an Exalted Ruler of the Littleton Elks Lodge, and a man with a sense of humor. His wife Taffy says she and her husband Alex spent much of their marriage laughing with each other.

Alexander Skudneski went from his earthly home to his heavenly home on Saturday, January 31. One of the last things he did was sink into his new recliner chair, just a few days old, smiled, and said, “I really like this chair.” A short while later, after laughing at a joke Taffy made, he died from an aneurysm at the age of 83.

Skudneski was born October 1, 1931 to Ollie Skudneski and Mary Olszewski in Gladssmere, Pennsylvania. He began his education at Penn State, but was drafted into the Army and sent to Korea, where he was stationed at the 8th Army Headquarters from l952 – 1954. After the service he returned to Penn State to finish his degree in Aerospace Engineering. He was then employed at Stern-Rogers Corporation in Southern California, Lockheed Martin in St. Louis, and Martin-Marietta in Colorado.

In 1991 he met Taffy Long at the Black Forest Inn in Black Hawk, the year gaming began. He came in for lunch and Taffy was the beverage manager. It was Skudneski’s 60th birthday. The couple was married on January 2, 1994, and lived in Gilpin County, where they both became active members of their community.

Skudneski was a generous man, thoughtful of others. If he couldn’t personally help someone, he would make sure to find out who could. He was a great dancer; on Saturday nights, he and Taffy would clear the floor in front of the television set and work on their jitterbug, polka, or foxtrot. Taffy’s mom often said that Alex could dance better than Lawrence Welk.

On January 2, Alex and Taffy were remarried, for their 21st anniversary, and had a reception at Roy’s Last Shot in Gilpin wearing the polka-dotted socks.

He loved life and enjoyed building model ships for his man cave. He wanted nothing to do with computers as he felt he had done enough of that in his job to last a lifetime.

Skudneski was proud of being a veteran and Taffy said he almost burst the buttons on his uniform when he was honored at the Gilpin Elementary School Veteran’s Day service in November. If he heard the national anthem being played, he would stand up, even if he was just at home.

Donations may be made in Skudneski’s name to the Elks Lodge 1650 in Littleton. Services will be held at the beginning of next week at the Newcomers Funeral Home in Lakewood. For more details call 303-274-6065 and ask for Rebecca.

END_OF_DOCUMENT_TOKEN_TO_BE_REPLACED

Benefitting the county, schools, and much more By Don Ireland   This year marks the 30th anniversary of casinos opening in the former little mining towns of Black Hawk, Central City and Cripple Creek, Colorado. In those early years, smoking was allowed inside ... END_OF_DOCUMENT_TOKEN_TO_BE_REPLACED

Benefitting the county, schools, and much more By Don Ireland   This year marks the 30th anniversary of casinos opening in the former little mining towns of Black Hawk, Central City and Cripple Creek, Colorado. In those early years, smoking was allowed inside ... END_OF_DOCUMENT_TOKEN_TO_BE_REPLACED