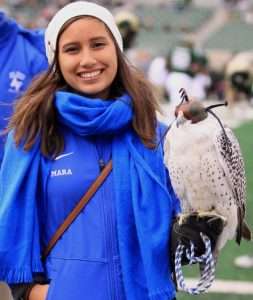 An ill-conceived college prank before the November 3rd football game between Air Force and Army in West Point, N.Y., went terribly wrong. The tradition of stealing the opposing team’s mascot in the past might have seemed funny to some and never resulted in injury until now. The practice dates back over a century with Navy kidnapping Army’s mule and Army “getting Navy’s goat.” Unfortunately for Air Force’s mascot, a bird is more fragilethan a mule or a goat and another branch of the service has now been regrettably included in the shenanigans. Two Army cadets abducted Aurora (a 22-year old gyrfalcon) and Oblio (a 15-year old peregrine falcon) Friday night from the home of an Army Colonel sponsor. Having been cloaked in a sweater and stored in a dog carrier overnight, Aurora suffered abrasions to her wings apparently from thrashing about the cage. Blood was noted on her feathers when she was returned the next morning as the guilty parties realized that their reprehensible mischief had gone awry. Back in Colorado Saturday night, it was feared that Aurora would have to be euthanized due in part to her advanced age. After being examined by a master falconer and Fort Carson veterinarians, the gyrfalcon showed signs of improvement and was soon flying around her enclosure. Aurora is expected to make a full recovery.

The United States Military Academy issued a formal apology Sunday. Although usually cited in the mistreatment of horses and mules, “Abuse of a public animal” is a criminal offense in the military. If applied in this case, the as of yet unnamed perpetrators may face a year in jail and dishonorable discharge.

Dave Gibson has been a contributor at the Weekly Register–Call for thirteen years. Past articles and pictures may be viewed at www.DaveGibsonImages.com.

END_OF_DOCUMENT_TOKEN_TO_BE_REPLACED

Where the dead get to tell their story By Jaclyn Schrock On Saturday, August 21, the Gilpin Historical Society held their annual Cemetery Crawl. Tickets allowed the shuttle of hundreds of guests from the Teller House parking lot to the Cemetery. Depending on v... END_OF_DOCUMENT_TOKEN_TO_BE_REPLACED