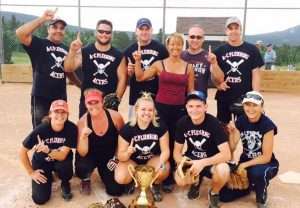 Team claims 13-7 victory over the Champs

“The perennial runner-up Acer’s finally won the whole enchilada and are the 2016 league champs!” noted Orrin Snyder of the Gilpin Community Center, who managed the program.

Ten games were played in the double-elimination tourney, with the final championship game between the Acers and the Champs just finishing as an afternoon thunderstorm began. The Acers, who were sponsored by AC Plumbing, triumphed 13-7.

Snyder provided highlights of the weekend. On Saturday’s key match-up, game 7 between the Acers and the Champs, the Acers won 12-11. After six and a half innings of play, the game was tied at 11 and the Acers pushed the twelfth run across home plate for the victory. This sent the Champs, who were tournament champs for the past three years, into the losers’ bracket.

The final inning began with the Champs’ pitcher, Dave Patterson, walking the Acers’ lead-off hitter, Lee Ramsey, putting the winning run on base. The Acers loaded the bases with Kellie Bayne and Tom Ihme. Then they sent Jen McLaughlin to the plate. “She delivered with a walk-off RBI single, scoring Lee Ramsey for the victory,” Snyder reported.

The number four seeded Players were the first team in the tourney to lose two games, with the Mean Machine following right behind.

Some of the teams that didn’t fare as well during the season nevertheless put in a good showing during the tourney, with all personnel present. Sunday started with an elimination game in the losers’ bracket between the Misfits and Blue Sox. Snyder related, “The fifth-seeded Misfits finally got all their players to the tourney and looked like they would bust the bracket with their excellent core of young players, two who cleared the fences with homers over the weekend.”

At the start of the second inning, Matt Click led off the Misfits with a monster blast that banged off the Weber Field scoreboard for a home run. However, while rounding the bases, touching them all, he mistakenly touched the catcher’s home plate instead of the runner’s home plate and was called out, per league rules, nullifying the run. This set off a series of exchanges between the teams and officials that lasted the entire game. The Blue Sox prevailed by a 10-8 margin.

The Blue Sox had spent their energy on the battle against the Misfits and were beaten soundly and eliminated by the Champs, 13-0 in game nine.

Their loss set up a re-match in the championship game between the number two seeded Champs and the number one seeded Acers. Last season, these same two teams squared off for the championship and the Champs won. This season, though, during four contests in the summer’s league play and the first meeting in the tournament, the Acers defeated the defending champion Champs.

The Acers had a few anxious moments as the Champs jumped out with a lead of 7-5 after three innings. But the Acers were determined to make this their year and came back to score 6 runs in the fourth inning and 2 more in the sixth. They got what they needed in the seventh inning – 3 outs against the Champs – to prevail 13-7, going undefeated through the bracket.

The season began on May 17. The tournament, usually played during the first weekend in August, was moved up a week due to people’s vacations. Games were played on Tuesday and Thursday nights, with Wednesdays for makeup. Eight or nine of the evenings got rained out. The teams played their 43rd and 44th league games the evening of July 28, so they got all the games in, Snyder advised.

The league’s high point was four years ago with 13 teams, but the number of teams has been decreasing each year. This year, there were just six teams.

A rule change was implemented this season. Each team now has to have five men and five women for starters, to make it a true co-ed team. Initially, it was difficult to find that many women players, Snyder said, but they did manage and found some new faces. He hopes that this will help build the number of teams back up again.

END_OF_DOCUMENT_TOKEN_TO_BE_REPLACED

Benefitting the county, schools, and much more By Don Ireland   This year marks the 30th anniversary of casinos opening in the former little mining towns of Black Hawk, Central City and Cripple Creek, Colorado. In those early years, smoking was allowed inside ... END_OF_DOCUMENT_TOKEN_TO_BE_REPLACED