A winning week for the Eagles 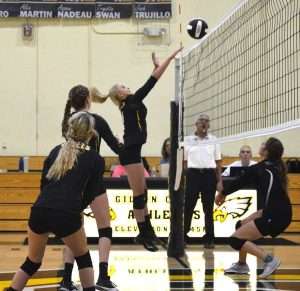 This leaves the Lady Eagles with a 4-3 record thus far, 2-1 in league action. The LC Warriors have a 1-4 overall record; FR Falcons are 1-7.

Set scores for the match against LC were 25/7, 25/15, and 25/10. LC scored first in the opening set, but Gilpin’s girls quickly opened up a 7-point lead. They stretched that to a 16-point lead near the end of the period, with the tally 20-4 Eagles. LC kept working and put three more points on the board, but it was Gilpin all the way to the 25/7 triumph for the first set.

LC came back in the second set determined to make a better showing. Again, they scored first, and again, Gilpin responded with several quick points. This time, though, LC kept the match closer, even tying up the game 7-7, 8-8, and 11-11. Finally, the Lady Eagles got into their game and started pulling ahead until they were 11 points in the lead, making the score 24/13. LC didn’t give up but put 2 more points on the board. Both teams kept playing hard till Gilpin scored the winning 25th point, and set two ended at 25/15.

The third set continued similarly, LC putting up the first point. Fans encouraged the two teams as they volleyed back and forth for the first several points. Gilpin managed to open up a 6-point lead, and as in the other sets, exhausted their opponent about halfway through the set to a substantial lead. The game ended 25/10.

Kasen Nelson led the Eagles in kills with 9, followed by Alex Martin with 8. Cicely Lepro was tops in serving aces with 4; Nelson had 3, and Courtney Holmes, Aspen Nadeau, Bailey Hobson-Kroll, and Alex Martin came in with 2 each. Katelyn Armstrong contributed one solo block. Nadeau and Nelson were leaders in digs with 6 each, and Lepro and Martin each helped with 5. Lepro had 19 assists, and serves were received by Nadeau (6), Nelson and Martin (5 apiece), and Hobson-Kroll (1).

The Lady Eagles repeated their success when they played the FR Falcons on Thursday in Littleton. The set scores were 25/6, 25/13, and 25/15. The Eagles garnered 21 kills. Martin was first in kills for Gilpin with 9, followed by Hobson-Kroll and Nicole Adams with 4 each. The team scored 5 serving aces: 2 apiece by Lepro and Martin and 1 by Nelson. Armstrong and Adams each had one solo and one assisted block, and Nelson contributed one solo block. Gilpin had 20 total digs; Nadeau led with 7, and Nelson had 4. Lepro mustered 20 ball handling assists. Nadeau and Martin led in serves received with 8 and 6, respectively.

Gilpin met Nederland at home on Tuesday, September 19. Results of that rivalry will be reported in next week’s Weekly Register-Call.

The Gilpin Eagle football squad conquered the Caliche Buffaloes of Iliff, Colorado 36-30 in an away non-league test on Saturday evening, September 15. The win gives the Eagles a 2-1 overall record; Caliche is 2-2.

Gilpin had the upper hand in the first quarter, scoring one touchdown and one conversion and holding their rivals scoreless. Fans enjoyed a good contest during the second quarter as they watched Gilpin score another 22 points and Caliche put up 14, to bring the score to 30-14 Gilpin. The tables were turned after halftime, with the Buffaloes mustering a TD and a successful conversion. Gilpin maintained their 30-point status, and the third quarter ended at 30-22 Gilpin. The Eagles ran in one final TD in the fourth quarter but were denied the conversion. The Buffaloes also scored a touchdown and made good on a conversion, for a final tally of 36-30 Eagles.

Jack Ball, Austin Boulter, Manny Gomez, and Stephen King all made TD’s for Gilpin. Boulter and King were successful in adding conversion points.

#45 Manny Gomez was named Defensive Player of the Game, contributing 6 solo tackles, 3 assists, 1 tackle for a loss, and 1 fumble recovery, which he returned 20 yards for a defensive touchdown.

In other highlights, Boulter completed 2 passes to King for 52 yards, including 38 long, and rushed for 120 yards. Ball gained 129 yards in 9 carries.

The Eagles finished the contest with 438 total yards, including 286 rushing, 52 receiving, 100 in kick returns, and 52 passing.

Josh Trujillo made 13 solo tackles and 14 assists to lead the defensive effort, followed by Jake Duncan with 14 solo and 5 assisted tackles. Boulter and Tristan Froio each sacked the Buff’s QB for 13-yard losses, and Froio got in 1 hurry.

On Caliche’s side, Adam Zink completed 2 passes for 58 yards, rushed for 201 yards in 37 carries, and made 2 touchdowns. Skyler Armstrong and Josh Kokes each ran in TDs. Kokes and Zink were successful on conversion attempts. Zink led Caliche in tackles with 7 solo and 11 assisted; their team had 82 total. Kokes and Traevonn Walton got in a couple of sacks.

Gilpin had 11 first downs to Caliche’s 16. Both teams racked up 14 penalties; Gilpin had 116 penalty yards and Caliche had 77.

Next, Gilpin visits Belleview Christian in Westminster on Saturday, September 23.

END_OF_DOCUMENT_TOKEN_TO_BE_REPLACED

Benefitting the county, schools, and much more By Don Ireland   This year marks the 30th anniversary of casinos opening in the former little mining towns of Black Hawk, Central City and Cripple Creek, Colorado. In those early years, smoking was allowed inside ... END_OF_DOCUMENT_TOKEN_TO_BE_REPLACED