A voyage back in time – it’s the journey 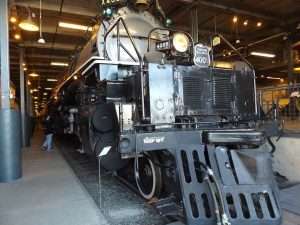 At the Forney Museum of Transportation

The Forney Museum of Transportation in Denver provides education, entertainment, and surprises for gearheads and fans of nostalgia. The collection housed in this very large building includes bicycles, motorcycles, cars, trucks, trains, tractors, stage coaches, and even a couple of airplanes. There are over 500 vehicles displayed since the founder, JD Forney, invented the first instant-heat soldering iron and started trading welding equipment to farmers for old cars they had for the museum.

The centerpiece at Forney is the Union Pacific 4005 “Big Boy” steam locomotive. At 1.19 million pounds, it is 85 feet long and provides a whopping 6,290 HP of pure pulling power. On April 27, 1953, Big Boy 4005 was involved in a tragic event in the Red Desert of Wyoming. Due to a switching error, the engine, tender and 18 cars were derailed and scattered along the track in the desert. Engineer Leo Murry, Fireman Lawrence Endres, and Brakeman James Anderton perished in the wreck. Today, the engine still bears the scars from this tragedy. As you board the engine you can feel the eeriness and sadness that surrounds the mighty UP 4005. “To those who enjoyed the romance of the rails, the bark of a steam locomotive at work on the grade, Union Pacific’s Big Boy was a live giant of steam and steel, thundering out of the West over the rails of the Nation’s first transcontinental railroad.” As well as being impressive, even overwhelming to the sights and senses, they were extremely successful and no other steam engine could equal their performance.

For fun, visitors can dress up in vintage clothing and pose for photos inside a Jeep with rugged backdrop, or even an old Model T. The museum also hosts parties inside an antique trolley.

Another feature at Forney Museum is a large collection of Indian motorcycles ranging from a 1913 Twin to a 1973 Scout – yes, surprise – Indian motorcycles were made as late as ’73, and who doesn’t like Indians! Also on display is a cool 52 Vincent, several Harley Davidsons, Hondas of all sizes, and other rare unique scooters and cycles.

Also at Forney is a whole array of cars, from the 1955 two-seat tandem, 3-wheeled Messerschmitt “Bubble Car,” which makes a Smart car look like a city bus, to the luxurious 1934 Pierce Arrow enclosed limousine. A 1923 Kissel Speedster Model 45 owned by the famous pilot Amelia Earhart is also there. Amelia nicknamed it the “Yellow Peril” for all its 41 horsepower generated by the 6 cylinder motor, but in 1924 took it on a trip from Los Angeles to Boston.

Check out the Forney Museum of Transportation sometime – the engineering marvels and artistic talents will amaze you to what folks can accomplish.

To visit the Forney Museum of Transportation, take I-70 to exit 275B (Brighton Blvd), then to 4303 Brighton Blvd, next to the Denver Coliseum. It’s open Monday through Saturday, from 10 am to 4 pm, and Sundays 12-4 pm. Admission is $11 for adults, $9 for seniors, and $5 for kids age 3-15. Children under 3 are admitted free. For more information and admission prices and group discounts, check out their website at www.forneymuseum.org or call 303-297-1113.

END_OF_DOCUMENT_TOKEN_TO_BE_REPLACED

Where the dead get to tell their story By Jaclyn Schrock On Saturday, August 21, the Gilpin Historical Society held their annual Cemetery Crawl. Tickets allowed the shuttle of hundreds of guests from the Teller House parking lot to the Cemetery. Depending on v... END_OF_DOCUMENT_TOKEN_TO_BE_REPLACED