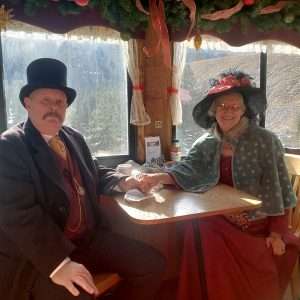 At the Georgetown Loop Historic Mining and Railroad Park

Santa’s North Pole Adventure daylight round trip takes between 50- 60 minutes from Devil’s Gate Station in Georgetown, CO, elevation 8,615 feet to Silver Plume, CO, 9,178 feet. Santa’s Lighted Forest rides along much of the 1884 original route, begin at 5 p.m., November 17, 2018 through January 5, 2019. Passengers choose between Coach, Parlor, or Presidential Cars, all enclosed and heated. The train is pushed backwards up the mountain, with Coach cars leading the way. First, the view and thrill of looping up to the 30 foot high bridge on a sharp curve over Clear Creek begins the journey. Now, the route passes by Hall Siding, bridging the water twice to pass the platform (where many tour Lebanon Mine in summer months), up to High Fill curving around to Moring Star Siding and Engine house and depot in Silver Plume. On the return trip from Silver Plume Station, the engine pulls the train down the mountain curves, twists, and bridges followed by one Presidential Car, three Parlor Cars, and the three Coach Cars.

After 1840, development of progress was riding on the heels of the industrial revolution. Mankind was far less bound to artisan craftsmanship and laboring farming now released by industrialization and machinery. Seeking minerals to develop more metal work brought the brief era of incredible wealth made possible by ripping open the Rocky Mountains and taking what was hidden deep beneath previously respected forests in high elevation and deep cold. Life was extremely dangerous and flamboyant history was made in Gilpin and Clear Creek Counties with the raging quantities of mined fortunes. Oh the tales that are told of days gone by.

The first railroad line to leave Golden and reach Black Hawk going up Clear Creek Canyon arrived in December 1872. This steam-powered wonder climbed steep elevation, crossed bridges and went through tunnels to open access to the mining operation in the Rocky Mountains. The train improved travel from horse drawn wagons and even stage coaches along routes, then intersecting with the Ute Indians. Bonds from Clear Creek and Gilpin Counties funded the construction of the railroad line. The construction was organized by William A.H. Loveland according to the timeline of the Georgetown Loop.

William Loveland came to these parts as a gold seeker along with uncounted prospectors – some just got lost, a few met up with plains Indians, and others successfully crossed from the western Kansas Territory and southwestern Nebraska Territory. They all leapt into adventure, having heard about the party of miners led by William “Green” Russell discovering placer gold deposits in July 1859 along the South Platte River. These “fifty-niners” used Pike’s Peak as their landmark to reach the gold strikes at the foot of the Rocky Mountains. As gold and later silver were found in higher elevation, Loveland supported and encouraged the Colorado Central Railroad.

The railroad reached Idaho Springs in June of 1877, and to Georgetown in August 1877 with Jay Gould’s funds who controlled the Union Pacific. This opened the area to those who worked the mines as well as tourists to enjoy the majesty of the mountains, rushing waters and undeveloped regions of the growing United States, now that the Civil War was over. Lured on to Leadville, one of the greatest silver strikes, prompted the desire to continue a route through narrow canyons and very steep grades from “Silver Queen of Colorado” Georgetown toward Breckenridge and Leadville. The Colorado Central Railroad accepted plans in 1879 from Jacob Blickensderfer, Union Pacific’s chief engineer. Just to reach Silver Plume, where Clear Creek fell at more than a 6 percent grade, which is too steep for trains to travel, expensive measures were taken with Blickensderfer’s plans. The historic route built four bridges, three hairpin turns, and a tight horseshoe curve to reduce the grade to a 3 percent incline, thus creating the Georgetown Loop. 1884 ended Gould’s plans to extend this railroad line to Breckenridge and Leadville with the massive cost and the Denver Rio Grande RR completing an easier and cheaper more southern route to Leadville.

By 1893, with the devaluation of silver, the railroad to nowhere became a revenue stream for tourism with the photo of Devil’s Gate High Bridge on postcards making it famous. Due to the lack of use for freight or passengers, this railroad line was discontinued in 1939. Seeking the nostalgic past in 1973, the Georgetown Loop was brought back to life. In 1984, 100 years later after the initial build, Devil’s Gate High Bridge and Georgetown Loop were ready for train travel again, with thanks to Union Pacific providing rolling stock and much of the track.

Georgetown celebrates their lush history the first two weekends in December. 2018 is the 59th Annual Georgetown Christmas Market. The downtown streets have historic markers on most the building blocks, restored from their gracious craftsmanship common in bustling days of the mid 1800’s to the early 1900s. Traditional Christmas hasn’t changed in 100 years when you stop off in Georgetown. Christmas and train shops, yummy restaurants, antiques and vintage treats, apparel, artistic wares thrill traditional shoppers bringing reminders of days beyond our recollections. The greens, some decorated with lights, horse-drawn wagon rides through Historic Georgetown, and roasted chestnuts bring amazing sights and sounds. The quant, beautiful mountain town perpetuates traditions for generations with appearances of St. Nicholas in traditional attire and a daily procession of Santa Lucia. Camera’s capture the memories of carolers in Victorian dress, dancers, and other family fun.

One group that brought many to bustling streets in Victorian attire is the Victorian Society of Colorado. Sunday, December 2 at 11 a.m., a good sized group gathered for High Tea at the Dusty Rose at 7th and Rose in Georgetown. This Victorian group had 16 men, women and children ride the 1 o’clock Santa’s North Pole Adventure in a Parlor Car, boarding at Devil’ Gate Station in Georgetown.

Traveling along I-70 to Georgetown, clusters of people were recognized on the frozen Georgetown Lake. Apparently ice fishing brings many to drill their hole and drop a baited line to try their luck for a hungry trout.

Keeping traditions and making family fun memories, neighboring Georgetown’s festivities add to the fun of Central City’s Tommyknocker Festival in early December. The mountain community is full of festivities in the Christmas season, including the Gilpin County Winter Arts Festival this weekend, December 8th and 9th.

END_OF_DOCUMENT_TOKEN_TO_BE_REPLACED

Benefitting the county, schools, and much more By Don Ireland   This year marks the 30th anniversary of casinos opening in the former little mining towns of Black Hawk, Central City and Cripple Creek, Colorado. In those early years, smoking was allowed inside ... END_OF_DOCUMENT_TOKEN_TO_BE_REPLACED