A trip through one of the oldest mining camps in Colorado 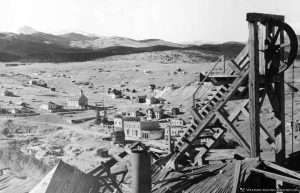 Nevadaville, Gilpin County, June 4, 1878 – This is one of the oldest mining towns of Colorado. It is reached by passing through Central City, and following Nevada Gulch up for nearly one and a half miles. The famous Burrough’s lode was discovered in 1859, just after the discovery of the big Gregory mine near Central. At the same time a great many miners came looking for gold in the gulch. During the four years following, many exciting events transpired. In 1860, a ditch was made that brought water from Peck Gulch and North Clear Creek, about eight miles away. This, with the consolidated ditch that tapped Fall River ten miles away in a straight cut, but by its course around Bald Mountain to Russell Gulch, made the length sixteen miles, and was operated until 1863. During ’61 to’63 the sluicings from the gulch washed down upon the property of the people of Black Hawk to such an extent that mob law came near existing. Miners’ meetings were held at both places. Those of Black Hawk armed themselves for the avowed purpose of protecting their interests, even to driving the miners from the gulch if necessary. Fortunately for the preservation of life, the owners of the ditches gave way, both from the feeling of the people and the annoyance caused by the erection of stamping mills in the gulch. In those days, besides stamps, many other processes were tried, to use up ores, but all failed, except that of stamping. Since then but little gulch mining has been done, though it is claimed that good pay might be made could plenty of water be obtained. In February 1861, an election was held in which 1,700 votes were polled. As a great many miners from the surrounding districts were allowed to vote, the election was contested and a second one held, in which the vote fell to less than 800. But few of the early gold seekers remain. O.T. Sparks, of ’59, and Jones and J.W. Ratliff of ’60, are the only ones I have been able to find.

The Odd Fellows organized a lodge in 1868 and built a hall over a stone building at a cost of $5,000. This is nearly paid for. The name of Nevada being similar to Nevada City of California, the government a few years ago changed the post office title to Bald Mountain. Recently, under the new state law an election was held, and the name Nevadaville was adopted, and the following municipal officers elected:  D. H. Andrews, mayor.  J. J. Clark, recorder. F. J. Bartle, E. H Morse, Michael Kirby and Thomas Mason, trustees.

The population of the place, estimated at nearly 2,000, is comprised of Americans, Cornish, and the descendants of the Emerald Isle (Irish). At times the patriotism of the two later nationalities boil over and lively times ensue, but for the most part they are quiet, order-loving citizens. J. W. Ratliff is the postmaster and dealer in tobacco and cigars. John Foley, the real Irish gentleman that he is, conducts the principal billiard parlor in town. R. B. Williams, the popular butcher, is also a prospective candidate for sheriff of Gilpin County. J. Kramer knows how to treat the boys when they come to his billiard hall to enjoy a quiet game. J.J. Bartle is the leading grocer and deals in provisions. Tim Nichols understands mixtures and his appetizers are the very best. Charles Hagar, an arrival here from California in ’60 or thereabouts, bears in dignified silence the title of baker and grocer. Dr. W. H. Beverly is proprietor of the only drug store in town.

The school, under the able management of Prof. A. Lyon as principal and Mrs. Fullerton in charge of the primary department, is in a flourishing condition.

The Mines and Mills

The Whitcomb Mill with twenty-five stamps, is under the control of Messrs. Lewis and Aulsebrook, who work a night and day shift, stamping two and a half cords (128 cubic feet) of ore per day. They treat ore from owners and lessees of mines.

The Monmouth-Kansas Mill, just below the noted mine of the same name, has been running steadily for four years with fifty-two stamps. Repairs are now being made that will increase the number to sixty. Eleven men are employed on night and day shift. Six cords of ore per day is the amount stamped. P. A. Kline fills the responsible position of foreman of the Monmouth-Kansas Mine. I hope to give you facts and figures in the future. Farther up the hill, the Hidden Treasure Mine is reached. The boys here have struck it rich within the past few days, and are not very free to give information, but some items were gathered. The Hidden Treasure is supposed to be a portion of the old California vein, discovered years ago. It is several hundred feet west of the Standley California. The owners of the Treasure worked upon the mine to within about five feet of where the present streak of mineral was found, when, concluding they had spent money enough for the pay obtained they leased it, and now the Hidden Treasure is claimed to be found. The shaft is 550 feet in depth. Two levels are being driven each way at 500 and 550 feet. Near these levels and between them the vein is from one to four feet thick, which mills from five to seven ounces after the smelting ore has been selected. The latter sells for $125 per ton first class and at from $50 to $75 for second class. From three to five cords per day is the yield of ore. The ore has been sent to several different mills, and all give the high yield above noted. The owners are Jones, Teller, Young, Johnson and Havens, and the lessees, Jones Rodda, Simmons, Maddern Bros., Newell and Serenson.

The California Mine, supposed to be the vein on which is the Hidden Treasure, is several hundred feet east, and is owned by Joseph Standley. This mine was discovered in 1859, and Mr. Standley, part owner, sold at one time his interest, but afterwards repurchased it and the remaining portion. The shaft is 640 feet down. At 580 feet, two levels have been started, one drifted sixty feet and the other thirty. At a depth of 400 feet there are two levels, one of 200 feet and the other 250 feet west. The bad air has caused a suspension of labor, except the attempt of drifting on the west level to the shaft of the old mine, the distance being about 400 feet. The average per cord is about ten and three-fourth ounces. The highest ever known, being twenty-seven ounces. The hoisting machinery is worked by a thirty-six horse power engine. Mr. Standley has been a steady, persevering miner for many years, and it is hoped his reward is surely to come. The Gilpin Mine is worked under lease by Lugg, Harvey, Richards and Warren. They hold a two years’ lease. The shaft is 600 feet down. There are several levels drifting east and west, at 500 feet depth. They are endeavoring to drift to the shaft of the Ophir, 100 feet west. Water is giving them a great deal of trouble in the mine. The mill ore runs from four to eight ounces per cord.

The Clark-Gardner Mine, one of the best developed mines, is being repaired with timber to protect the shafts. No work has been done here for some time, owing to litigation. The Jones lode on Gunnell hill is looking well. The shaft is now nearly 400 feet, and has passed through rich ore for the last eighty feet or over. After smelting ore has been selected the mill ore usually runs nine ounces to the cord. The vein is from eighteen to twenty-four inches wide. The hoisting is conducted by the aid of a twelve-horse power engine. There are many other lodes and some that have given big returns in days gone by, but the most of them are idle.

END_OF_DOCUMENT_TOKEN_TO_BE_REPLACED

Where the dead get to tell their story By Jaclyn Schrock On Saturday, August 21, the Gilpin Historical Society held their annual Cemetery Crawl. Tickets allowed the shuttle of hundreds of guests from the Teller House parking lot to the Cemetery. Depending on v... END_OF_DOCUMENT_TOKEN_TO_BE_REPLACED

Where the dead get to tell their story By Jaclyn Schrock On Saturday, August 21, the Gilpin Historical Society held their annual Cemetery Crawl. Tickets allowed the shuttle of hundreds of guests from the Teller House parking lot to the Cemetery. Depending on v... END_OF_DOCUMENT_TOKEN_TO_BE_REPLACED