A Taste of Broadway 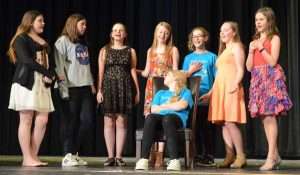 “Peak to Peak Players” brings a cabaret show to Gilpin

There’s always magic in the air on Broadway. There was quite a bit of it in the air in Gilpin County, too, on Saturday, October 20, as the Peak to Peak Players strutted their stuff to an appreciative audience at the Gilpin School auditorium. Children, adults, and teens entertained like pros with songs, dances, and comedy from several musicals.

The production was a fundraiser to support the performing arts in our mountain communities. The evening included hors d’oeuvres, a silent auction, a raffle, and the show.

The Players took only about a month to put the show together, featuring all local performers and focusing on the kids, who are talented young singers and actors.

Patrons streamed into the atrium prior to the show to enter the raffle and bid on scores of goods and services. The items raffled for adults were two plane tickets to anywhere in the United States or a one-week stay at any Wyndham Resort. For just one dollar, kids could take their chances at winning movie baskets with popcorn, candy, and movie tickets, or a basket with a Roald Dahl book collection.

The variety show was a tribute to Broadway musicals. Jacquelyn O’Brien and Crystal Zeilbeck emceed. Act 1 included “Poor Unfortunate Souls” from Little Mermaid Jr., “Alone in the Universe,” from Seussical, a monologue entitled “The Baptist Gourmet,” “No One Else,” from Natasha Pierre and the Great Comet of 1812, “If Only You Would Listen,” from School of Rock, and several others. All the numbers were performed expressively and skillfully.

Act 2 began with sneak previews from upcoming performances. The cast from Little Mermaid Jr. performed energetically to “Under the Sea,” and several actors from The Best Christmas Pageant Ever followed with a short vignette.

The plaintive tones of “Gabriel’s Oboe” from The Mission featured Misty Ebers on, of course, the oboe. The Gilpin School Choir singers belted out “Popular” from Wicked, an encore from their performance earlier this month. The grand finale was “Mad Hatter” from Wonderland, with powerful singer Grace Pouliot.

Special thanks went to Jamie Shaak Ragan and Misty Ebers for sharing their musical talents, Chip Smith for his musical direction, the Gilpin County Education Foundation for its grant to make Little Mermaid Jr. possible, Gilpin County School, Darren Newberg, and The Mountain-Ear.

The youngsters bubbled over with excitement, and the parents were very pleased with the quality of the program.

“I’m very proud that my daughter Jordanna is in the theatre program,” reported Tom Gagnon. Jordanna stated, “I like entertaining people, and I will do this again.”

“The program has great benefits – social interaction and an outlet for their talents,” said Dale Sternlicht, whose daughter Dannika performed that evening.

Several performances are coming up. Mark your calendars for The Little Mermaid Jr., on Friday, November 16 at 7:00 p.m. and Saturday, November 17 at 2:00 p.m. in the Gilpin School Auditorium. The Best Christmas Pageant Ever is coming on December 7, 8, and 9 at St. James United Methodist Church in Central City and on December 15 and 16 at the Backdoor Theatre in Nederland. Romeo and Juliet and Shrek the Musical are slated for 2019.

Young people will be getting ready for a fun-filled summer theatre education experience. Peak to Peak Players will offer two summer camp sessions at Gilpin County School that culminate in full productions. They will be performing Alice in Wonderland Jr. and The Greek Mythology Olympiaganza. Activities include theatre games, skill development, and rehearsals, and the sessions are open to students in second through twelfth grades.

If you’re looking for wholesome, fun family entertainment that is truly well done, come join the audience. These performances are not to be missed!