A “tailing tale” of William Gilpin 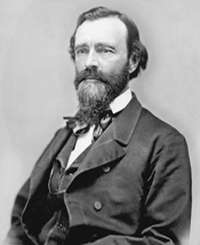 Early explorer, Nathanial Hill, described William Gilpin as, “…he knows almost everything, but he is the most impractical man I ever knew. When driving, he talks incessantly. Part of the time he is talking to me, part of the time to his ponies, Toby and Franny. The rest is soliloquy.”

Born to a wealthy Quaker family in Philadelphia, Pennsylvania on October 4, 1813, son of Joshua Gilpin, a merchant and paper maker, William Gilpin was educated by private tutors and later sent to study in England. After two years of education in England, he returned to the states and graduated from the University of Pennsylvania in 1833. From 1834 to 1835 he attended West Point, but did not graduate.

In 1836, Gilpin received commission as second lieutenant with the 2nd Dragon Regiment and fought in the Seminole War. He also served as a recruiter in Missouri where he developed an attraction to opportunities on the frontier and a great interest in the westward expansion of the nation.

In 1838, he resigned his commission and moved to St. Louis where he opened a law practice and accepted a position as newspaper editor. Three years later, he moved to Independence, Missouri where he interacted with settlers embarking on the Oregon Trail.

In 1843, while traveling the Santa Fe Trail, Gilpin joined up with the John C. Fremont expedition to find a route over the Continental Divide. While passing through Colorado, William discovered evidence of placer gold, but continued his trek westward with Fremont until the party reached Walla Walla in the Oregon Country. The Fremont party traveled on to California, while Gilpin settled in Oregon Country. At that time, the region was under the joint administration of the U.S. and the United Kingdom, under the control of the Hudson Bay Company in Vancouver.

Settling in the Willamette Valley, Gilpin participated in the organization of a provisional government, and at the convention at Champoeg helped draft a petition requesting support from the U.S. Congress. In 1845, he was charged with delivering said petition to Congress in Washington, D.C.

During the Mexican-American War, in 1846, William Gilpin was commissioned as Major of the 1st Missouri Mounted Infantry Regiment and marched to Chihuahua City in the successful bloodless campaign that captured New Mexico. He was later given command of a mounted infantry battalion to protect the Santa Fe Trail against Indians.

During that same year, as a strong proponent of manifest destiny, Gilpin appeared before the U.S. Senate and is quoted as saying, “The untransacted destiny of the American people is to subdue the continent—to rush over this vast field to the Pacific Ocean—to animate the hundred millions of its people, and to cheer them upward—to set the principle of self-government at work—to agitate these herculean masses—to establish a new order in human affairs—to set free the enslaved—to regenerate superannuated nations—to change darkness to light—to stir up the sleep of a hundred centuries—to teach old nations a new civilization—to confirm the destiny of the human race—to carry the career of mankind to its culminating point—to cause stagnant people to be reborn—to perfect science—to emblazon history with the conquest of peace—to shed a new and resplendent glory upon mankind—to unite the world in one social family—to dissolve the spell of tyranny and exalt charity—to absolve the curse that weighs down humanity, and to shed blessings round the world! Divine task! Immortal mission! Let us tread fast and joyfully the open trail before us! Let every American heart open wide for patriotism to glow undimmed, and confide with religious faith in the sublime and prodigious destiny of this well-loved country.”

In 1848, Gilpin returned to Missouri where he resumed his practice of law and made an unsuccessful attempt at a political career.

In 1859, William’s earlier suspicion of gold deposits in Colorado proved correct as thousands of eager prospectors traveled westward in the Colorado Gold Rush. That same year, he published a futuristic history of the region entitled The Central Gold Region where he wrote, “…the destiny of the American people is to subdue the continent.” He predicted the Mississippi River Valley would become the center of western civilization with the new settlement of Denver as its capital. With Denver located near the 40th parallel north, he envisioned all the great cities of the world along that same latitude would eventually be linked by railroad lines and proposed a rail line over the Bering Strait connecting North America to Asia.

He further believed the American West would be settled and eventually be inhabited by huge populations. He advocated for the now-debunked climatological theory of “Rain follows the plow.” This theory held that settlement in the arid lands of the West would increase rainfall in the region.

In 1860, prompted by the crisis in Kansas, William Gilpin joined the Republican Party and his alignment with President Lincoln was rewarded in 1861 when the president appointed him governor of the Colorado Territory. Governor Gilpin arrived in Denver City on May 29, 1861 with his administration beset with difficulties from the outset. Organized at the start of the Civil War, the Territory faced threats of Confederate sympathizers within its own boundaries and the possibility of a Confederate invasion required the governor to quickly appoint a territorial military staff and solicit volunteers for a military regiment, all without approval of the U.S. government. He issued $375,000 in drafts on the federal treasury, believing the government would honor them later. Gilpin initiated a fundraising campaign which was supported by local merchants and citizens until it was confirmed the government had no intention of honoring the drafts. By the summer of 1861, pandemonium ensued and petitions circulated requesting his removal as governor. This movement was fostered by an angry William N. Byers, editor of the Rocky Mountain News.

Despite the financial storm, the funds raised allowed for the creation of the 1st Colorado Volunteers. The assembling and preparation of that regiment proved highly valuable in the spring of 1862 when the Confederate Army launched an invasion through New Mexico, today referred to as the New Mexico Campaign. The Confederacy needed money and intended to seize the mineral-rich Colorado Territory. The 1st Colorado Volunteers marched southward to win the Battle of Glorieta Pass, which became known as the “Gettysburg of the West.”

Despite the 1st Colorado Volunteers victory on the battlefield, in April 1862, President Lincoln replaced Gilpin with John Evans. The U.S. government eventually honored the drafts after being presented with itemized statements by the holders.

William Gilpin died in 1894 as the result of being run over by a horse and buggy. Gilpin County, home of the “Richest Square Mile on Earth” was named after him.