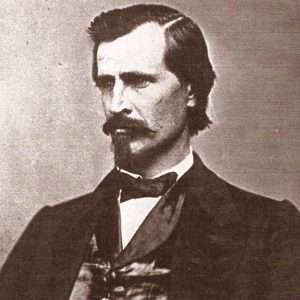 William Z Cozens was born in L’Orignal, Canada on July 4, 1830. His parents, originally from New York and Vermont, resided for a few years in Canada then returned to the United States, settling in Russell, New York.

At the age of eighteen, William enjoyed all educational advantages afforded by the public school system of New York. He then pursued an apprenticeship to become a carpenter, a profession he followed in New York until 1856. For the next three years he performed his trade in Chicago, in Joliet, then in St. Louis.

Lured by the promise of riches of the Pikes Peak Gold Rush, in January 1859, William left behind his carpentry career and struck out for the Rocky Mountains. After a harrowing two month journey crossing the plains behind an ox team, on March 22, 1859 he arrived in Auraria, shortly thereafter heading into the mountains and on to the Gregory Diggings.

After one year of mining and prospecting and finding himself no richer for his efforts, William “Billy” Cozens accepted a position as bartender at a general mercantile and saloon operated by Jack Keheler. In December of 1860, Billy married Mary York who had been born in England in 1830, and was the first white woman in the mining community and theirs was the first wedding in the district.

In 1859, the Gregory Diggings was part of the Kansas Territory. Neither federal, state nor territorial government representation reached that far west. On June 8, 1859, a meeting of miners established the Gregory Mining District. The self-appointed president and secretary, and a committee of twelve drafted a code of miners’ laws which were ratified by those attending. On July 9 1859 the District elected a town board consisting of president, recorder or secretary of claims, and a sheriff. Jack Keheler was elected sheriff and he appointed Billy Cozens as his deputy.

There were no courts of any kind. Disputes were settled by arbitration. Upon reaching an impasse, the district president called upon the entire population to convene as a common forum called the Miners’ Court. Without the aid of lawyers, citizens gathered at the Gregory Diggings to decide the case. After the explanation of the points of issue, the issue was presented for popular vote, from which there was no appeal.

All cases of larceny, theft, murder, and claim-jumping passed in review before the Miners’ Court. A murderer received sufficient time to make peace with his maker, and then he was hung. A petty thief was tied to a stake and publicly whipped with a black snake, his head was shaved on one side, and then he was banished from the district.

In the spring of 1861, the people of the Gregory Mining District elected Cozens as the sheriff of the district. Later that same year, he lost the election of sheriff for Gilpin County to Jesse Prichard, and Prichard immediately appointed Cozens as his deputy.

In the fall of 1862, Billy became sheriff when Prichard was commissioned as Major of the Third Colorado Volunteer Infantry. In September, 1863, Cozens was elected Sheriff, and filled that position for the next two years. During this same time, Billy also served as U.S. Marshal, built Washington Hall and Cozen’s House on High Street, and erected a jail. This was the first public building in Central City,

During his term as deputy and as sheriff, Billy Cozens was known as a man “absolutely without fear.” He held crime and murder to a minimum in Gilpin County and personally intervened in many mining controversies, frequently putting his life on the line in the name of the law. An example of Cozen’s fearlessness and the respect he held of the local citizenry occurred in January 1864. As the chief clerk at the Massasoit Hotel on Main Street in Central City, and a popular person in town, Joseph Copeland had accompanied a lady friend of a man named Van Horn for a walk along “The Casey.” When Van Horn caught sight of the couple, he shot and killed the clerk, fled the scene, was pursued, captured, and jailed. Afraid Van Horn might escape just punishment by law, a mob proposed to take him from the sheriff when he was brought to trial. After arraignment, Sheriff Billy Cozens escorted Van Horn to the newly built jail. A crowd filled Eureka Street and demanded release of the prisoner. Cozens refused the demand and drew a line in the street with his toe, pointed at it and said, “I’ll kill the first man who crosses it.” Cozens was respected and admired for the exemplary job he had done as sheriff, and no one would doubt his word. Van Horn was eventually tried and convicted. He was hung from a gallows erected on “The Casey” near where he had murdered Copeland. It was the first legal hanging in the Colorado Territory.

In the fall of 1864, Indians became troublesome and cut off communication between the States and Denver, murdering and driving off the settlers down in the Platte Valley. In the absence of regular troops, Billy Cozens played an active part in raising two companies of mounted infantry from Gilpin County. On January 17, 1865 Cozens was commissioned by Governor Evans as Captain of Company C under the command of Colonel Samuel L. Browne. They spent that winter on the Colorado plains at Lydian Springs, opening communication with the States and serving as escort for the U.S. Mail and emigrants, west to Valley Station and east to Buffalo Station.

In the spring of 1865, upon the cessation of Indian hostilities, Cozens returned to Gilpin County, and upon the expiration of his second term of office as Sheriff he went east. One year later, he returned to Colorado and was elected City Marshall of Central City.

Mary was a devout Roman Catholic and was not happy with the uproarious mining camp of Central City and the constant threat to her husband in his role as Sheriff. So in the fall of 1876, they decided to relocate over the Continental Divide and purchased 320 acres of ranchland along the Frazer River in Middle Park (north of the present town of Winter Park), and settled down to raise livestock, establishing a hay ranch and stage stop. The Cozens Families’ stage stop became a well-known stopping place for summer tourists, who often enjoyed Mary’s fine meals and “Uncle Billy’s” (Mr. Cozens’ nickname) tales from his days as a Gilpin County lawman. They had seven children, although only three, Mary Elizabeth, Sarah Agnes, and Willie survived infancy. In the fall of 1878, Grand County elected him as County Commissioner. Cozens also served as Postmaster of Fraser for twenty-eight years. William “Billy” Cozens died on his ranch in 1904, and his funeral was one of the largest in the community. None of his children had any offspring so Mary left the ranch to the Catholic Church and Regis University, which built a retreat on the property. In 1987 the ranch house was given to the Grand County Historical Association and now houses a museum.

END_OF_DOCUMENT_TOKEN_TO_BE_REPLACED

Benefitting the county, schools, and much more By Don Ireland   This year marks the 30th anniversary of casinos opening in the former little mining towns of Black Hawk, Central City and Cripple Creek, Colorado. In those early years, smoking was allowed inside ... END_OF_DOCUMENT_TOKEN_TO_BE_REPLACED

Where the dead get to tell their story By Jaclyn Schrock On Saturday, August 21, the Gilpin Historical Society held their annual Cemetery Crawl. Tickets allowed the shuttle of hundreds of guests from the Teller House parking lot to the Cemetery. Depending on v... END_OF_DOCUMENT_TOKEN_TO_BE_REPLACED