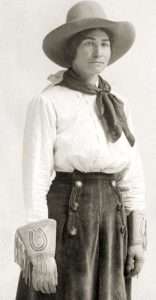 From: Wild Women of the Old West, a story by M.J. Van Deventer

What was it that pushed Bertha Kaepernik Blancett to pursue a career in a man’s world at the turn of the twentieth century? What driving force motivated her to perform heroic stunts on horseback and fearlessly ride bucking broncos?

Was it her early upbringing on a Colorado ranch, living in a house that was part soddy, part dugout, working alongside her German immigrant parents and six siblings? Or was it some innate determination to escape the back-breaking rigors of ranching and carve a name for herself outside the boundaries imposed on women at that time? Did she have a natural-born sense of courage, or did she find and nurture that courage in the face of challenge?

Some believe her incredible drive to succeed began on a warm summer day in 1888 on the Great Plains of eastern Colorado when William Kaepernik placed his five-year-old daughter on the back of a horse. “Now Bertha, be sure you stay onboard,” he commanded. “If you get off, there may not be anyone around to put you back on.” He gave her the job of riding an old horse along a path to keep the cattle from straying into the garden—a daunting job and a good lesson in self-reliance for any five-year-old.

William Kapernik could not know that simple act of telling Bertha to “stay onboard” would be one of the defining moments of her life—a moment that would carry her through a spectacular rodeo career and into the arena of the country’s top Wild West shows. From then on, whenever the family could not find her, they looked for the old horse. Even when she had advanced to more spirited horses, she was never afraid. There was not a horse she could not or would not ride. She was a true pioneer in women’s rodeo competition and one of the greatest of all women riders.

Bertha’s parents, German-born William and Federico Kaepernik, had emigrated from Germany to Cleveland, Ohio, and then moved west in 1886 with their seven children to begin a new life near Atwood, Colorado. It was a hard life on the one hundred sixty acres, and Bertha—the youngest of the seven children—learned the meaning of the word “toil” when she was barely out of diapers.

Bertha’s youth was spent working on the family’s ranch and trailing her father, helping him work the cattle. She was riding after the cattle, gradually learning about horses and their ways, and how to break them—how to train them to accept riders. She was strong and healthy from an almost constant life in the saddle between days at school or between school terms. She rode with the same ability, and all of the confidence, exhibited by the men she knew.

When Bertha had leisure time, she competed with men in local rodeos, a pastime then uncommon for girls. These were casual riding and roping contests held at roundups. These informal tournaments had no arenas, no paying spectators, no entry fees, no rules, and no prizes. This was considered cowboy fun, a way for cowboys from neighboring ranches to get together and show off their horsemanship and ranching skills.

By the time she was twenty-one, in 1904, Bertha had matured into a very attractive young woman, with pretty brown hair, bright brown eyes that sparkled, and a cheerful smile, and the firm, quick step of an athlete. She was also full of spunk and ambition, determined to prove to the world what an expert horsewoman she was and that she could ride not just a horse, but any horse. She had mastered the art of knowing horses and being athletic on them, standing up or sitting down.

Bertha’s opportunity came when the promoters of Cheyenne Frontier Days announced that women would be allowed to compete in the upcoming celebration—the first in rodeo history. It is doubtful the promoters were feeling any pressure from women to compete. And did they even know of any women who would want to compete? Did they really expect any takers? Both questions yield doubtful answers. More than likely, it was merely a publicity stunt to round up interest in what was then a fledgling rodeo.

Cheyenne Frontier Days at that time was only eight years old, a mere infant of a rodeo that suffered competition from other rodeos in the region. It would be a long time before Cheyenne Frontier Days earned the slogan “The Grandaddy of ‘em All.” The announcement welcoming women riders did serve its purpose. It aroused a stir of interest—especially in Bertha.

She took the promoters’ dare. She would compete in bronc riding—roaring into the rodeo arena aboard an ornery horse whose only goal was to throw her off. Competitors had to provide their own stock at that time, so she needed to find an intense, unbroken animal that would give her a challenging ride. She talked Len Sherwin, a well-known Colorado rancher and horse trader, into lending her the bronc she needed.

Going to Cheyenne was a bold undertaking for Bertha, who had to counter the objections of her parents, worried about the dangers to a young woman traveling alone on the prairie. Bertha’s defenses were solid. She had tamed a number of wild horses. She knew she could ride a bucking horse as well as anyone, and she was eager for the opportunity to prove it.

It was an arduous trip. There was no road or path to guide Bertha across the plains on her way to Cheyenne, which was more than one hundred miles from Atwood. She followed the tracks of the narrow-gauge railroad, the Prairie Dog Special, from Sterling, Colorado to Cheyenne. Mounted on a riding horse, Bertha led the unbroken horse, Tombstone, across the high, open county.

When Bertha reached Cheyenne, she was met with great surprise. The rodeo promoters had not expected any women to actually enter. She was the only woman who had answered the call. She was also met by a torrential downpour that turned the arena in front of the rodeo stands into a quagmire, and the cowboys at first refused to compete, claiming it was too dangerous to ride bucking broncs in the deep mud. Bertha said she would ride.

Tombstone gave Bertha, and the crowd, a wild performance to remember. He could not buck Bertha off. When he failed to do that, he reared on his hind legs, a move fraught with danger for even a seasoned rider, and plunged into a bucking frenzy. Then the worst happened. He fell backward, pulling a widow-maker, as old-time cowboys called the move. The fun was gone in the stands. A collective groan emerged from the crowd

Determined to “stay aboard” as her father had commanded, Bertha slid to one side as the horse went down: she was still aboard as Tombstone exploded to his feet. The crowd screamed, amazed at the feat they had just witnessed—and astonished it was performed by a young woman.

When offered a second chance to ride, Bertha quickly claimed it. The horse bested her, tossing her over his head and into the dirt. But Bertha had tenacity. She stepped back up to Tombstone, climbed aboard, and rode until the horse finally bowed in exhausted defeat. Bertha left the arena in triumph without a glance at the howling mob of spectators.

Bertha gave up breaking horses but went on to ride in shows in Colorado—at Loveland and Fort Collins—in 1904, and returned to Cheyenne in 1905 and competed in one of the cowgirl bronc-riding contests. Later in 1905, she rode in the Sherwin Wild West Show where she was bestowed the title of “Champion Lady Rider of the World.” In 1906, Bertha joined the Pawnee Bill Wild West Show, which she left after one season to ride in the Miller Brothers 101 Ranch Wild West Show. In 1910, Bertha began working with her new husband, Dell Blancett, as trick riders for the Bison Moving Picture Company in Los Angeles. In 1911, the first year women officially competed at the Pendleton Round-Up, Bertha entered the bucking horse, trick riding, fancy roping, and relay racing competition. She won the women’s bucking horse championship and returned in 1912 to repeat her victory.

During World War I, Bertha took on Roman race riding, a dangerous routine where the rider stands atop two horses while they race in tandem around the arena. She made the fastest time ever recorded for a female Roman rider for a half-mile in the Walla Walla, Washington rodeo.

Dell enlisted in the Canadian Cavalry and Bertha took a job in a print shop, putting her riding career on hold until he returned. But the only love of Bertha’s life never came home. The man who could face all the open dangers of bucking horses, angry steers, flailing hooves, and horns of wild bulls in the arena was as vulnerable as any other man to the unseen menace on the Western Front. Bertha returned to the Pendleton Round-up in 1920 and 1921 as a guest of the rodeo committee, she wore a gold star on her sleeve in memory of her beloved husband.

The first two books in my Misadventures of the Cholua Brother’s Series are available on my website, on Amazon.com, Lulu.com and BarnesandNoble.com for $12.99 ea. + shipping. They can also be bought through the Gilpin Historical Museum and Mountain Menagerie in Central City. Watch for the release of the third and final book in the series Bonanza Beans, available spring 2016

END_OF_DOCUMENT_TOKEN_TO_BE_REPLACED

Where the dead get to tell their story By Jaclyn Schrock On Saturday, August 21, the Gilpin Historical Society held their annual Cemetery Crawl. Tickets allowed the shuttle of hundreds of guests from the Teller House parking lot to the Cemetery. Depending on v... END_OF_DOCUMENT_TOKEN_TO_BE_REPLACED