A tailing tale of Verena Kepler 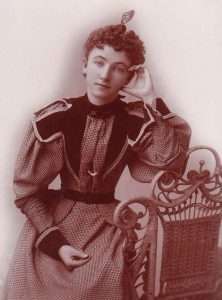 From the moment gold was discovered in 1859, Black Hawk and Central City were popular destinations for thousands of people, including photographers. Hundreds of photographers moved in and out of the two towns, photographing people, buildings, mines, trains, and anything else they could think of.

One of the earliest known photographs taken in Colorado shows miners at work in Gregory Gulch in 1859. Charles Weitfle, who became famous for his stereo view cards, had a shop on Main Street in Central City for many years beginning in the 1870’s. Alexander Martin, who would later become famous for supposedly taking pictures of ghosts, had a shop in the First National Bank Building in Central City for a short time in the 1880’s or 1890’s.

Central City could also claim to be home to one of the pioneer woman photographers of the West, Verena M. Kepler, who was in business under the name V.M. Kepler. She worked in Central City as a photographer from 1896 to 1899. She was born in Switzerland to an American father and Swiss mother on January 6, 1851. According to the 1920 Census, she became a citizen of the United States in 1859, although that year both of her parents were listed as having been born in the United States. By 1880, she was living with her husband, Samuel Kepler, a fireman in Emporium, Pennsylvania. They had two children during their marriage, but both children died young according to census records. One of the children was a daughter named Flora, who was five years old in 1880.

Kepler’s photography career was brief. The first mention of her as a photographer came in 1893, when The Illustrated Buffalo Express of Buffalo, New York, held its second annual Amateur Photography Contest. Kepler, who was then living in Red Bluff, California, received an honorable mention for her figure study entitled “Selling Tamales.”

In 1899, only three years after she arrived in Colorado, Kepler left Central City and returned to Pennsylvania, where she moved in with her sister Alma’s family. Although still listed as married in census records, her husband was not with her.

By 1910, however, Kepler had returned to Colorado. Widowed, she was living in a boarding house run by Bessie Loughlin at 2309 Gaylor Street in Denver and working as a nurse in a doctor’s office. She had also shaved five years off her age, claiming to be fifty-four instead of fifty-nine, a common practice for women of the time.

On March 7, 1916, Kepler moved into the Old Ladies Home at 38th Avenue and Raleigh Street in Denver, which was operated by the Ladies Relief Society of Denver. She died at the home on October 7, 1928 at the age of 77. Kepler’s funeral was held on October 10, 1928 at the Olinger Mortuary in Denver. Her obituary noted that she was cremated, but her burial place remains unknown.

For a woman considered a pioneer Western photographer, not much is known about Verena Kepler’s brief career as a photographer, but it was clearly something she was passionate about and tried hard to make a living doing. The Gilpin History Museum has a handful of her photos in its collection.

Thanks to David Forsyth, Executive Director of Gilpin County Historical Society, for this story.

END_OF_DOCUMENT_TOKEN_TO_BE_REPLACED

Where the dead get to tell their story By Jaclyn Schrock On Saturday, August 21, the Gilpin Historical Society held their annual Cemetery Crawl. Tickets allowed the shuttle of hundreds of guests from the Teller House parking lot to the Cemetery. Depending on v... END_OF_DOCUMENT_TOKEN_TO_BE_REPLACED