A tailing tale of twins and dynamite 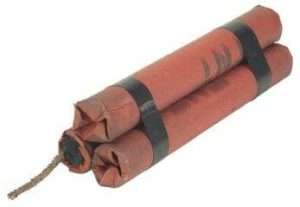 Life in the Early Days

From “Life in the Early Days” By James K. Ramstetter (1910-1996). Permission of use granted by Mary Ramstetter.

We run out of wood

It was late in January 1922. We had several very heavy snow storms and the weather was terribly cold. As a matter of fact, it was so cold that sun dogs were showing every morning. A sun dog is a refraction of the sun, making it appear that there are two or three suns in the sky. This happens when the temperature drops below minus 30 degrees. The presence of over four feet of snow made you know it was a real winter.

Our father was staying in the town of Golden where he had work for his draft horses. He left us with a good supply of wood, but the extreme cold weather caused us to use more. Ordinarily, there was plenty of wood, but due to the deep snow we could not find it.

My twin brother and I were trying to cut down a huge tree about a hundred yards south of the house. If we could get it down, we would have plenty of wood. The tree was nearly three feet in diameter and about eighty feet tall. It was well over three hundred years old. It was dead and had been struck by lightning several times. There were several dead tons of wood in it.

We had been using a two-man saw cutting away at the tree for two days. However, there was a shift in the direction of the wind which caused the tree to lean the wrong way and pinch the saw. We were unable to get the saw loose. It was a shame as another two hours of cutting and the tree would have fallen. We waited for several hours for the wind to shift back, but it didn’t. My twin and I were endowed with the gift of always being in agreement and thought of the same things at the same time. We finally decided there was no way to saw the tree down, so we decided to blast it down with dynamite.

Our father kept a supply of dynamite out in the potato cellar where it was protected from freezing. Among the many tools, we had a ship’s auger which we inherited from our great-grandfather. It could bore a hole two and one-half inches in diameter and go about two feet in depth. We bored a deep hole into the bottom of the tree above ground level. We got about six sticks of dynamite and stuffed it down into the hole in the tree. We wanted plenty of time to get away from the blast, so we used twelve feet of fuse. (Fuse burns about one foot per minute so that would give us twelve minutes to get away.) My twin said we had better go in the house and warn our sister, Frances and little brother Walter what was about to happen—then we thought about our mother.

Our mother was the nervous type and very easily excited. We knew that when the tree got blasted down it would shake the daylights out of the house. Our sister, Frances, who was about ten years old, seemed to appreciate our problem. We had a very large, old German Bible which always rested on top of the piano. Our sister put it down on the floor and said that when the tree got blasted down she would tell our mother the Bible fell off the piano.

We went out back to the big tree and rechecked the fuse, then lit it and ran back into the timber quite a ways and turned around with our eyes on the big tree. Finally, there was a big explosion—the tree seemed to jump about twenty feet upward, then fell to the ground, breaking all its branches free. The blast cleared all the snow away for about a hundred feet from the tree stump. The two-man saw was laying on the ground unharmed.

In the house, things worked out about what we expected. Our mother was out in the kitchen when the blast shook the house. Our mother rushed into the living room—our sister immediately told her the Bible had fallen off the piano. Our mother was furious and proceeded to give our sister a spanking. Our little brother, Walter, saved the day—he told our mother that the wind had blown the big tree over and we would have plenty of wood. Mother let go of our sister and was suddenly pleased that she did not have to tear up the bedroom floor.

We had a country telephone line and our mother called to Golden to let our father know that he did not have to come home as the wind had blown over the big tree and the twins were busy sawing.

The tree furnished enough wood to last till spring. When our father returned home, he praised us for getting the tree cut down. Years later, he said that he figured what we had done, but thought the less said about it the better. We were just twelve years old.

From Maggie: If you have any interesting stories about family or acquaintances who have lived or still live in Gilpin County or the surrounding areas, please contact me. You can reach me at 303-881-3321. Email me at Maggie@Maggiempublications.com, or mail me at P.O. Box 746495, Arvada, Colorado 80006-6495.

The first two books in my Misadventures of the Cholua Brother’s Series are available on my website, on Amazon.com, Lulu.com and BarnesandNoble.com for $12.99 ea. + shipping. They can also be bought through the Gilpin Historical Museum and Mountain Menagerie in Central City. Watch for the release of the third and final book in the series Bonanza Beans available in late February or early March.

END_OF_DOCUMENT_TOKEN_TO_BE_REPLACED

Benefitting the county, schools, and much more By Don Ireland   This year marks the 30th anniversary of casinos opening in the former little mining towns of Black Hawk, Central City and Cripple Creek, Colorado. In those early years, smoking was allowed inside ... END_OF_DOCUMENT_TOKEN_TO_BE_REPLACED