A Tailing Tale of the Willis family in Central City 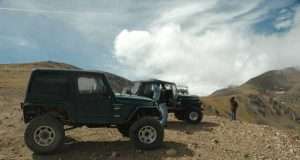 Many thanks to Mabel Jane Shafffer Smith of Golden, Colorado for this fascinating story.

In 1869, boarding a steamer near their home in Michigan, Great-grandmother Mary Ann packed up the children and her mother and dutifully set out to join Great-grandfather James in Colorado. The trip across the great lakes to Chicago took five days. Upon reaching Chicago, they boarded a train for Cheyenne, Wyoming. The train ride ended when the train wrecked, killing two men. From that point in their journey, the travel-weary Willis family boarded a very crowded stage coach for Denver. The coach traveled night and day, only stopping to change horses. When they arrived in Denver, the next coach to Central City had no room, so they took the next stage to Idaho Springs. That stage then continued up the hill to Central City. Great-grandmother described the ride through Virginia Canyon, on “Oh My God Road,” as breath-taking.

My great-grandparents were religious people, and after my grandfather, Harry Willis, was born in 1870, they decided not to raise their eight children in the rowdy mining town of Central City. In 1871, they built at ranch just above Boulder and Great-grandfather James continued to work in the mines part-time.

In 1890, Grandfather Harry returned to Central City to work in the mines. In 1901, when he was thirty-one years old, he married seventeen-year-old Mabel Lundquist. Mabel’s parents, Otto and Clara came from Sweden, and in 1894 they moved to Central City.

In 1872, when the Colorado Central Railroad reached Black Hawk, Grandmother Mabel’s father, Otto, went to work for them cleaning rail cars and shoveling coal into the locomotive tender. For forty-two years, Great-grandfather Otto shoveled four tons of coal a day, every day, until he retired in 1926 at seventy-years-old.

Although, Grandfather Harry and Grandmother Mabel had seven children, only three survived into adulthood. Their little family lived on the hill east of the train depot, which is now under the tailings pile in south Central City. My mother, Viola, recalled watching beautifully dressed prostitutes get off the train. She said she was very impressed with the lovely women who looked to be very well off. No one told her what they did for a living.

In 1916, when the City Council decided to close down the red light district one block south of St. Mary’s of the Assumption Church on Pine Street, Grandfather Harry was a member of the council. He was not re-elected.

In 1926, my parents, Eldred and Viola Shaffer bought the house with the two bay windows that sits above the Catholic Church for $170. They paid $50 down and $10 a month to the former owners, who charged them no interest. The house came fully furnished.

In 1940, I was born in that very same house. In 1942, we moved to Golden so my father, Eldred, could work at the Remington Arms Plant, where he made ammunition for World War II. The plant is now in the Denver Federal Center.

Great-grandfather Otto Lundquist lived in Central City until 1944. He died in 1952 at ninety-seven years old and is buried in the Central City cemetery along with other members of my family.

From Maggie: A big thanks to all who stopped by to visit with me at Central City’s First Friday on September 4th. It’s always nice to be able to see my friends from up the hill, and meet new people. The weather was perfect, with no rain or wind after setup. The bands were very entertaining, lending a festive air to an already wonderful evening. It was so encouraging to meet the young women from the Sporting House Girls. Amanda and Star were so excited to share information about Lou Bunch and Central City history. Wonderful to know there are members of the younger generation dedicated to preserving the stories and memories of the past of Central City.

Copies of my books, “Dead Man Walking,” and “Pistols and Petticoats” can now be purchased from the Cholua Brother’s Coffee section in Mountain Menagerie on Main Street in Central City. Copies of “Dead Man Walking” are available at the Gilpin County History Museum. Copies of either book can be purchased online at Amazon.com, BarnesandNoble.com, and Lulu.com.

If you have stories about your family history in Gilpin County, please send them to me at: Maggie@maggiempublications.com; mail them to me at Maggie Magoffin, P.O. Box 6571, Westminster, Colorado, 80021, or call me at 303-881-3321.