A Tailing Tale of the Ramstetter Homestead 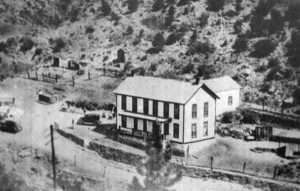 Born in 1910, the second of seven children born to Henry Ramstetter, Sr. and Vina Shannon (Williams) Ramstetter, James K. Ramstetter, Jr. grew up in Golden Gate Canyon on the Ramstetter homestead. After graduating from high school, James accepted a job with the U.S. Government in Washington, DC, but then returned to Colorado during the depression years. He worked as an accountant and at a later time was employed by the Chicago, Burlington and Quincy Railroad. He remained with the railroad until he retired.

James spent much of his retirement years compiling memoirs of his early childhood and researching the history of his birthplace. His book Life in the Early Days is a beautiful compilation of those memories and gems of research and I will be incorporating a number of his stories into my columns. This week’s story is just a taste of tales to come.

This house served as an important stage stop on the Golden Gate Canyon road which was the main route to Central City and Black Hawk. The opening of Highway #6 up Clear Creek Canyon in 1951 diverted a lot of traffic from Golden Gate as it saved several miles and eliminated climbing over several mountains.

This was a large, two-story, frame house. The lower story had a large entrance shed, large kitchen, large dining room, parlor, and three bedrooms. Joining the kitchen there was a cellar that had been dug into the hillside to be used for storing vegetables and meat. However, it was also used as a grocery store for the neighborhood. The upper story had a large hall with six windows on the west side and two windows on the south side. This hall was used as a meeting room and for the square dances that were held there frequently. A hallway and stairs lay between the large hall and a large sleeping room which could hold several beds. This sleeping room had an outside entrance which had a path leading down the hill to the first story level.

There was a large barn, a blacksmith shop, grainery, a pig pen, and cattle pens. There was also a smokehouse and a slaughtering shed. South of the house was a chicken coop and outhouse.

Early records indicate the house was built sometime during 1860 by a Thomas M. Robinson, who deeded it over to a Robinson-Baker Co., according to Jefferson County records made during August 1860, Book A, Page 89. On August 19, 1862, the Tri-Weekly Miner’s Register mentions a Mr. Childs as being the owner. Later on, an article in the Colorado Transcript names a Mr. Heath as owner.

November was the busiest month of the year. At this time, all vegetables that could be stored for the winter were brought in. Meat processing was an enormous task in itself. All kinds of sausages and other meats were prepared. A great deal of the meat ended up in the smokehouse and in barrels of salt for preservation. Often, meat was roasted and then canned in vinegar or a fruit juice. One delicious meat dish was Hasenpfeffer, a German recipe made from jack rabbits and combined with a fruit stew. Eating at the Eight Mile House was always a treat in itself.

The dining room, which was next to the kitchen, was quite large and had one table that could seat as many as sixteen people. There was a large wood stove for heat. There were two large windows facing west. Between the windows was a large deer head with antlers having seven points. The walls were decorated with several wildcats and coyotes that had been tanned and semi-mounted. Two doors on the south side entered the two bedrooms. On the north side, a doorway led into the parlor. Another doorway from the parlor led into a bedroom that was usually used by school teachers. A door on the west side of the parlor went out to the porch, which was under four of the six upstairs windows. The porch was large and in good weather people would be out on it enjoying the outdoors whenever there was some kind of get-together.

A stairway in the northeast corner of the dining room led to the upstairs hall and a large sleeping room. There was a stove in the sleeping room and another in the large hall, which was used for dances and community meetings.

From Maggie: Many thanks to Mary Ramstetter for giving me permission to reprints stories from James’s book. Mary and her husband Charles Ramstetter, cousin to James, reside in Golden Gate Canyon and have carried on James’s legacy in collecting their own amazing archives of Ramstetter family history and history of the Gilpin/Jefferson County area. Their book John Gregory Country is an invaluable resource for anyone interested in the history of the land and the people of this area. Mary has also published a series of novels set in the old west entitled Over the Mountains of the Moon, Down the Valley of the Shadow, and Ride, Boldly Ride.

If you have any interesting stories about family or acquaintances that have lived or still live in Gilpin County or the surrounding areas, please contact me. You can reach me at 303-881-3321. Email me at Maggie@Maggiempublications.com, or mail me at P.O. Box 746495, Arvada, Colorado 80006-6495.

The first two books in my Misadventures of the Cholua Brother’s Series are available on my website, on Amazon.com, Lulu.com and BarnesandNoble.com for $12.99 ea. + shipping. They can also be bought through the Gilpin Historical Museum and Mountain Menagerie in Central City.

END_OF_DOCUMENT_TOKEN_TO_BE_REPLACED

Where the dead get to tell their story By Jaclyn Schrock On Saturday, August 21, the Gilpin Historical Society held their annual Cemetery Crawl. Tickets allowed the shuttle of hundreds of guests from the Teller House parking lot to the Cemetery. Depending on v... END_OF_DOCUMENT_TOKEN_TO_BE_REPLACED