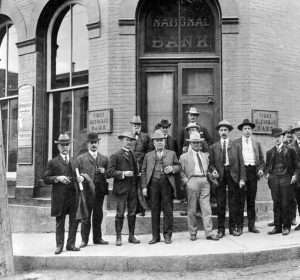 This week’s Tailing Tale comes from Bruce Jones of Gilpin County. Bruce shared with me the story of the Gilpin Railway Company.

A standard gauge railroad was proposed to be built from Pactolus (located on the banks of the South Boulder Creek) and connecting with the existing Moffat Railroad. The railroad was to follow the creek to the present South Beaver Creek Road. Then the tracks would go up the road to connect with the present Highway 119. The route would then turn south one quarter mile where it would curve and begin rising in elevation. This part of the roadbed still exists slightly above the present South Beaver Road and Highway 119. Rails were never laid, but grading was done for about five miles.

Bruce Jones’s family owned acreage on the South Beaver and the abstract for their property mentioned the right-of-way of the proposed Gilpin and Clear Creek District Railway.

Bruce shared with me information on the proposed Gilpin Railway from Roger Baker’s book, “Black Hawk,” and Donald Kemp’s book “Index to Colorado’s Little Kingdom.” Kemp uses many excerpts from the Weekly Register-Call.

According to Kemp, by 1906 David Moffat had completed his Moffat line, a standard gauge railroad that left Denver to the north, entered the foothills near Coal Creek Canyon, and then wound its way through a series of daunting tunnels to emerge at the grade of the South Boulder Creek at Gato (later called Pinecliffe). Passing through the gorge to Rollinsville, the line extended through Boulder Park, coming to the foot of the Continental Divide, where a complicated series of switchbacks known as the “Giant’s Ladder” took the line over Rollins Pass and into Middle Park.

With Moffat’s new line passing so close to Black Hawk, plans were soon made to develop routes south through Gilpin County. Contractor, Robert A. Hall, proposed a standard-gauge line that would connect through Black Hawk with the Moffat line at Pactolus, on South Boulder Creek. The route would cover 17 miles to Black Hawk, extending through Central City to Nevadaville and Russell Gulch.

According to an article in the Register-Call, the line would be, “built in a first class manner, and will be second to none in the state. The distance from this city to Denver via the Moffat short line will be 55 ½ miles, only 15 miles longer than the Colorado and Southern from the same point. The running time for the passenger trains is estimated at two hours, which will be nearly one-third less time than now required of the narrow gauge Colorado and Southern Railroad. The estimated cost of building and equipping this branch line is in the neighborhood of $1,000,000.”

Little more was heard about the building of Hall’s plan until the following October when the Register-Call  announced: “Bonds have been placed in Boston for the construction of the twenty-five mile railroad from Central City to Pactolus on the Moffat road. The Hall Construction company, of which Robert A. Hall is president, has charge of the construction work.”

A few months later the newly formed the Gilpin and Clear Creek District Railway held a meeting in Central City and the Register-Call reported: “On Tuesday evening last a number of business men of the city and county met in the parlors of the Teller House to form an organization and meet with Mr. Hall, of the Hall Construction Company, and to consider the building of a branch line of railway from Pactolus on the Moffat road, to this city, and on to Nevadaville and Russell Gulch. The object of the meeting is to devise ways and means of raising $125,000 in cash which is part of the contract embodied in the proposition and is to be done by selling bonds of the Hall Construction Company to cover the amount. Remarks were made by nearly everyone present endorsing construction of the new line, and promising their aid and assistance in helping raise the sum asked for. Another meeting will be held in the opera house next Tuesday or Wednesday evening, when all so disposed will be given the opportunity to express themselves on the subject and subscribe for shares of stock.”

Several weeks later, the Register-Call reported: “Gilpin and Clear Creek District Railroad and the Hall Construction company have opened an office in the center of the business district of this city on Lawrence Street. The railroad committee appointed by the citizens to raise the $75,000 required in order to secure the building of the road will occupy the same offices, and the parties desiring information can receive it by calling there.”

The railroad committee decided to seek input from the local residents on the question of supporting the new line financially and printed a questionnaire which included the question, “Do you favor making an attempt to raise $75,000?”

The urgent need to raise $75,000 (down $125,000 from the original announcement to raise $1,000,000) should have been a clue. Two years passed with little action. Finally, in 1906, the Register-Call reported: “Two and one-half miles of the grade from Pactolus is completed and ready for tack laying.”

Two months later the paper reported: “Graders are grading about three quarters of a mile each week and ties are being delivered from the tie camp preliminary to laying steel.”

Later that summer, the Register-Call reported: “Over 100 men and nearly that number of teams are working daily on the grade, which is advanced from one half to three quarters of a mile a week.”

Just one week later, the paper reported: “The contract has been let to the Hall Construction Company for the building of a ten mile spur to be built from the main line on the Moffat road south to Black Hawk and Central City, in Gilpin County, the cost which will be about $250,000. The work has begun and will be completed, it is expected, by the first of the year.”

By springtime, the company was back in its fundraising mode, and by mid-summer Register-Call readers were shocked with the announcement: “Incorporation papers were taken out by the Secretary of State office yesterday for the Central City & Pactolus Railway Company, capitalized $1,250,000.”

The sham continued until the following Christmas when the Register-Call reported: “On Wednesday, December 28th, Fermour J. Spencer, Trustee, will sell the property of the Central City & Pactolus Railway Company. Who wants to buy a railroad?”

From Maggie: Please plan to stop by and see me at this year’s annual Tommy Knocker Bazaar, Saturday, December 5th and Sunday December 6th, at the historic Teller House in Central City. I will be signing copies of “Dead Man Walking” and “Pistols and Petticoats.”

END_OF_DOCUMENT_TOKEN_TO_BE_REPLACED

Benefitting the county, schools, and much more By Don Ireland   This year marks the 30th anniversary of casinos opening in the former little mining towns of Black Hawk, Central City and Cripple Creek, Colorado. In those early years, smoking was allowed inside ... END_OF_DOCUMENT_TOKEN_TO_BE_REPLACED

Benefitting the county, schools, and much more By Don Ireland   This year marks the 30th anniversary of casinos opening in the former little mining towns of Black Hawk, Central City and Cripple Creek, Colorado. In those early years, smoking was allowed inside ... END_OF_DOCUMENT_TOKEN_TO_BE_REPLACED