A Tailing Tale of school in Central City in March 1874 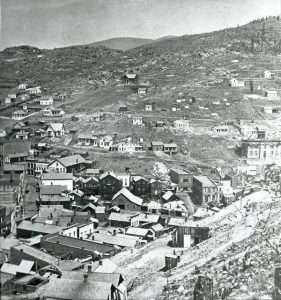 Many thanks to Karen Sullivan of Westminster, Colorado for sharing her amazing collection of books, magazines and news articles regarding Central City and the Gilpin County area. The following composition by Maggie Maguire comes from one of Karen’s books, “Mining Gold to Mining Wallets – Central City, Colorado 1859-1999,” and is one she felt particularly interested in as the name is so similar to mine.

Miss Maguire wrote: When I first came to Central about eight years ago, there was a public school in which about fifty scholars were taught. The schoolhouse was sitting on Lawrence Street. It was a rickety old building, two stories high, with “Public School” printed in large letters, over the street door. It contained three rooms, two of which were used for school purposes. The scholars sat on pine seats, their desks being painted dark drab, much the worse for wear and the use the boys made of their knives.

The teacher was very particular about some things, one thing especially; that was, we must wipe our shoes on an old sack placed outside the door for that purpose. The first time we forgot to do it, he whipped us; the second time he would make us stand on the platform where he had a strong cord fastened to a nail in the wall and passing through a hook in the ceiling. There was a knot on the end of the cord which the pupil held in his mouth and the teacher drew the cord until the culprit’s heels would not touch the ground. Then he would go to his desk and take out a riding whip which he always kept there, and stand beside the pupil. If the victim let go the string before he told him to do it, he would hit him with a sharp rap across the shoulders.

But, strange to say, he was not so particular himself. He used to chew tobacco and spit upon the floor, which I think is much dirtier than coming into school without wiping one’s shoes.

There was one boy in school who used to faint every time the teacher would whip him, but this did not save him, for the teacher made another boy stand beside him with a cup of water in his hand ready to throw in his face as soon as he showed signs of fainting.

One thing I must give him credit for, he never made us speak pieces or write compositions. This teacher did not teach very long because the scholars complained of the harsh treatment, and he was discharged after he had taught for about three or four months. At last the building became so rickety that it could not be used for school purposes, and the school was removed to another building. After the school was removed the old building was used for a paint shop and afterwards a carpenter shop, until it burned about a year ago.

The next school was a house that is also on Lawrence Street. It is still standing and has a very respectable appearance. The lower part of this building is used for a saloon at the present time, which goes by the name of Casino. School was held in this building but for a short time. I can say very little about this school except it was very good while it lasted.

After this, the school was again removed to another building which was on Eureka Street first used as a bowling alley and then for a dancing hall. This was partitioned off into three separate departments, and was used until our present building was completed. After the school was removed to this building, the old building was torn down and the Teller House now stands in its place. I need not say anything about the history of our present building, as most of the persons present know and can tell it better than I. One thing I wish to say in the former principal’s favor, he never made scholars read compositions.

From Maggie: My “Misadventures of the Cholua Brothers Series” Book 1- “Dead Man Walking,” and Book 2 -“Pistols and Petticoats” can now be purchased from the Cholua Brother’s Coffee section in Mountain Menagerie on Main Street in Central City. Copies of “Dead Man Walking” are available at the Gilpin County History Museum. Copies of either book can be purchased on my website at Maggiempublications.com, Amazon.com, BarnesandNoble.com and Lulu.com.

Please plan to stop by and see me at this year’s annual Tommy Knocker Bazaar, Saturday, December 5th and Sunday December 6th, at the historical Teller House in Central City. I will be signing copies of all three books of the Misadventures of the Cholua Brothers series.

If you have stories about your family history in Gilpin County, please send them to me at: Maggie@maggiempublications.com; mail them to me at Maggie Magoffin, P.O. Box 6571, Westminster, Colorado, 80021, or call me at 303-881-3321.

END_OF_DOCUMENT_TOKEN_TO_BE_REPLACED

Where the dead get to tell their story By Jaclyn Schrock On Saturday, August 21, the Gilpin Historical Society held their annual Cemetery Crawl. Tickets allowed the shuttle of hundreds of guests from the Teller House parking lot to the Cemetery. Depending on v... END_OF_DOCUMENT_TOKEN_TO_BE_REPLACED

Where the dead get to tell their story By Jaclyn Schrock On Saturday, August 21, the Gilpin Historical Society held their annual Cemetery Crawl. Tickets allowed the shuttle of hundreds of guests from the Teller House parking lot to the Cemetery. Depending on v... END_OF_DOCUMENT_TOKEN_TO_BE_REPLACED