A tailing tale of salting a gold mine, and Aunt Mac goes to jail! 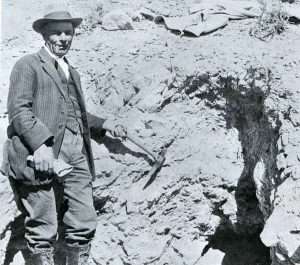 From “Life in the Early Days” By James K. Ramstetter (1910-1996). Permission of use granted by Mary Ramstetter.

I had been living and working in Washington, D.C. for nearly three years and had never been back home. It was hard, as I was always homesick, particularly in hot weather. It so happened a letter from my father said I should come home immediately—there were troubles he was unable to handle. Regardless of the troubles, I was ready to go home.

During the previous few days, some things happened to make me wonder what was going on back home. Every day about two days late, I would get a copy of the Denver Post by mail. One day when I opened the paper, I was astounded at the headlines: “Widow makes big gold strike.” The widow referred to was my grandmother, my father’s mother.

I immediately sent a letter back home saying that they should kill such publicity because I personally felt there was never enough gold around to make such a strike possible. My father had a one-third interest in the mine, and a lot of debts from the depression days. In my letter home, I outlined the problems that would be coming up and said I would be home to help. How, I did not know.

Before leaving Washington, I visited some people who were high up in administration and told them about my father’s plight. They gave me the names of the local administrators of the Department of Agriculture in charge of the Denver offices and told me what I needed to do. With that information, I left for home.

We met in the back of a pool hall in Golden. All the creditors were there—my father had not arrived yet—so we discussed the details on handling the matter. Then my father arrived. I explained the details. My father’s only answer was, “Nothing doing, the mine is entirely too valuable.” This broke up the meeting, with all kinds of threats. There was only one thing for me to do, and that was to go to Denver and see what the people with the Department of Agriculture could do. When I arrived at their offices, they were very accommodating. I explained my father’s situation and told them what he had to offer for security. After a short review of his case, they said they could help him out.

This was a great change for my father. He got a new loan from the Government at three and one-half per cent and he kept his gold mine.

The gold mine was shut down. My father, with my mother’s help, realized there was nothing to gain by continuing to operate it. One problem with the mine was the crew who were working the mine was just there for their food. It was a Golden grocer who was furnishing this food from his grocery that finally exposed what the whole mining deal was about.

A couple of the members of the crew started to worry about the grocer; the mine never seemed able to produce any gold. These fellows started to be concerned that their free lunch program might be in jeopardy if the grocer got tired of furnishing the groceries. They just repeated an old scheme that had often been done before to keep investors interested in a mining venture.

My Uncle Ott, who also worked at the mine, had a small bottle of gold dust that he had accumulated from panning gold from the creek beds. These two scoundrels stole the fine gold from Uncle Ott, pasted it on the side of the quartz rock, and set a charge of dynamite beside the rock. This procedure impregnated the gold into rock as though it had always been there. This is what is known as “salting the ore.” After this was done, they took the sample to a well-known assayer who determined the ore was worth about $6,200 per ton, which would be fabulous, if it were a true sample. The next step was to call the Denver Post and give them a report from the assayer. This is what caused all the excitement and would answer the hope that the grocery supply would continue.

The gold mine is still there, and I am of the opinion that it will remain there.

The citizens of Central City were shocked the morning of August 11, 1949. The whole mountain community was shaken. Many of its prominent citizens and business people who ordinarily had nothing to fear were suddenly served with criminal warrants. They were charged with gambling and the ownership of slot machines.

It was the action of the Justice of the Peace who had taken it on himself to end gambling in Central City. Most of the business establishments had slot machines which they operated in a rather open fashion. It so happened that the restaurant operated by my Uncle George and Aunt Mac had one slot machine. They were also arrested.

Thirty citizens had been served with the criminal warrants. The district attorney decided to come up to Central City on the following Wednesday evening to do the paperwork involved, making each person charged put up a bond so they would not have to go to jail pending their trial. Somehow or another all were taken care of, leaving Aunt Mac to be the final one processed.

A few words about Aunt Mac. We always referred to Alice Ramstetter as Aunt Mac because her maiden name was Maguire. She was Irish and had all the qualities that the Irish are famous for. She was strong minded and a staunch believer in standing up for those things that she favored. She had been a teacher for about twenty-five years and was an accomplished musician on the piano and organ.

Jailing Aunt Mac led to other problems. Central City had only a one-room jail and no eating facilities. So three times a day the sheriff had to take her down to her own restaurant for meals. This would have to continue for several weeks until those charged were tried.

However, the first Sunday the sheriff was rudely awakened early in the morning by the Catholic Priest who demanded that Aunt Mac be released temporarily as she was the church organist, and without her there would be no music.

Finally, the sheriff deputized the priest and released Aunt Mac into his custody long enough for the church services, and then to complicate matters further, Aunt Mac was also the organist at the Episcopal Church. The priest was charged with the obligation to seeing that Aunt Mac was returned to jail after the services at both churches were take care of.

This all ended in about a month’s time when the Governor of Colorado intervened and dismissed all the charges against all the citizens—including Aunt Mac.

From Maggie: This is my final column based on the writings of James K. Ramstetter’s book Life in the Early Days. Many thanks to the Ramstetter family, and in particular Mary Ramstetter, for allowing me to share these delightful and educational stories.

The first two books in my Misadventures of the Cholua Brother’s Series are available on my website, on Amazon.com, Lulu.com and BarnesandNoble.com for $12.99 ea. + shipping. They can also be bought through the Gilpin Historical Museum and Mountain Menagerie in Central City. Watch for the release of the third and final book in the series Bonanza Beans available Spring 2016

END_OF_DOCUMENT_TOKEN_TO_BE_REPLACED

Benefitting the county, schools, and much more By Don Ireland   This year marks the 30th anniversary of casinos opening in the former little mining towns of Black Hawk, Central City and Cripple Creek, Colorado. In those early years, smoking was allowed inside ... END_OF_DOCUMENT_TOKEN_TO_BE_REPLACED