A tailing tale of Rose Horn from Golden Gate to McCoy 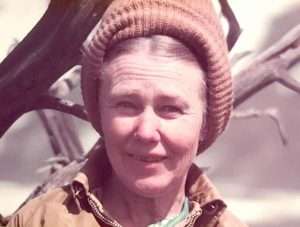 The following is from an oral recording by Rose Horn’s family with her at 83 years of age about her life as a child and living in the mountains. Rose is the daughter of Otto and Bertha Ramstetter. The sister of Gordon, Arlene, Kenneth, Charles, Richard, and Nora. And the cousin of James Ramstetter, author of  Life in the Early Days, which appeared in the Register-Call.

Rose grew up in Golden Gate Canyon in the 8-mile house, a well-known stage stop on the road to the Gregory diggings during the Pike’s Peak gold rush. The house has long been torn down, but a silo, built later, is still standing.

The following as told by Rose…

I was born on December 20, 1930, in Arvada, Colorado. We lived up Golden Gate Canyon on a dairy farm. My dad had milk cows, mostly shorthorns (probably Holsteins), then we also bought some Jersey cows. Then my dad got sick, and passed away when I was 11 years and 11 months old. I was the oldest of seven kids, and my baby brother was only 9 months old.

You got to get up and milk cows in the morning, and milk cows at night and get it ready for the milkman to take. It seems like I’ve been milking cows forever. I’m sure I started when I was 7 or 8 years old. We had about 20 to 25 cows, but I had brothers and sisters to help. We each had 5 or 6 cows to milk, and if somebody wasn’t there, we had to do their share too.

I never went to high school – 8th grade is all. I had brothers and sisters to take care of, and we lived eight miles from town. My mom never had a car, so we never drove. So, if we wanted to go to town we had to walk, and then hope somebody’d come down the road and pick us up. We grew up riding horses, more or less, and walking.

I remember one time we wanted to go to a picture show—they had Saturday afternoon matinees—and we walked clear to town to go to the picture show. It was “Our Vines Have Tender Grapes” with Jennifer Jones. And then after the picture show, we walked home right away. We had to get the milk cows into the barn and get them milked after we got home.

I had a dog, a kind of mongrel dog,“Pal” I called him. And I could get him to do about anything. He also knew pretty much when to go get the cows, and he was always ready to help herd them in every evening. I was the boss of my brothers and sisters ‘cause I was the oldest. And when they wouldn’t do something I wanted, I’d just tell the dog to get ‘em.

We never had a lot for Christmas ‘cause we never had that much money, though we might of got a few little things. If we got something for Christmas, it’d be socks, or jeans, or clothing. It wasn’t toys. As far as me wanting dolls, I had enough little kids for dolls – I had live ones.

Thanksgiving we usually celebrated with a good meal and stuff, and that was one of my main holidays. We never really did anything for birthdays. We made a cake and that was about it. We had a lot of school functions, and from 1st to 8th grade there might have been twelve kids in the whole school. Sometimes we had a minister that’d come out and teach Sunday School and stuff, and they’d do that in the school, too. He lived in Golden, and he was in the American Sunday School Union. They had student teachers that they’d send too, for our Sunday School.

We couldn’t grow much vegetables in our garden because of the high altitude. But I had an uncle, and he had a store in Central City. So he’d go down to Denver to the market, and he’d get gunny sacks full of cabbages and things like that there at the produce market, and bring ‘em up to us. Boy, I’d smell cabbage cookin’ . . . mmm mmm.

If we ever butchered beef, we’d have to can it to keep it from spoiling. The best thing that ever came to a ranch was electricity and a freezer. Then we wouldn’t have to stand over a cook stove and can. It must have been about ’56 when we got electricity. And we had a party line on the phone. I’ll tell you, you got on the phone and you got off the phone. You said what you had to say – you didn’t sit there and talk very long. Then you were listening to other people pick up during your call. When you wanted to call someone, you’d listen and if your call wasn’t important you’d just hang up and try again later.

The 4th of July we always had a picnic in the community where we had horse racing and foot racing and all that kind of stuff. And that’s when I met my husband, Ray Horn. And then we had a square dance that night. And Ray was there, too. But I went with another guy before I ended up going with him. It must have been about three years afterwards that we got married – I was 21 I think. When Ray asked me to get married, I told him I’d have to think that one over. I wasn’t quite ready yet. That was in ’52, and he had a ranch on Douglas Mountain about four miles west up Robinson Hill.

In 1964 we decided to sell our place on Douglas Mountain because it was a little too small for the cattle operation we wanted to grow. We looked at a place over the slope along the Sheephorn, then we drove out through McCoy. Someone had a place above McCoy, and I thought, “Oh, no. You wouldn’t want to come to McCoy. There’s nothing there.”

But we ended up moving over there because we could run more cows, and finally quit milking cows and just run range cattle. We brought 80 cow and calf pairs with us, and then we bought 20 more right away – we just kind of built up gradually through the years.

I got out and rode and all that kind of stuff as I’m not really much of a housekeeper or cook. I had to do my cooking, but I’d rather have been outside than inside. I worked in the field with haying and irrigating, and always rode a lot. I’d go out and help feed the cattle too, because we fed them hay with a team in the winter. As a rule we’d go to Steamboat or Kremmling for groceries about once every three to four weeks.

We made our own butter and we had a garden. Beets, carrots, and onions did well. Most root crops did well. And peas and green beans grew well too. Corn did well sometimes — some years you had corn and some years you didn’t. We’d grow potatoes too.

We had chickens and pigs for eggs and meat in addition to the beef cattle. We always had a milk cow too, just for household use. You had to keep at least three milk cows just to have one always milking. We sold milk and cream when we could. If we separated cream, we’d set a cream can down by the railroad track. There was a little passenger train that came through — the Yampa mail train. We put a little flag by the track, and they’d stop and pick up the cream and take it to Denver, and then bring the cans back and set them off for us to use again.

We always had beef. There were no rattlesnakes around McCoy. We had rattlesnakes over in Golden Gate. And it’s funny there aren’t any rattlesnakes here. I don’t know why.

It’s been a good life. Money-wise, it’s kind of a hard life. But in reality it’s a very good life. You’re out in nature so much, you’re kind of free to do what you like to do. And I think the ranch is a good place to raise kids. One thing, with our four boys, they knew how to work hard, but they never got much of a social life. They kind of lacked in social life, which I think made it kind of hard for them later.

I’m 83 now, so I don’t really get out much now to do many things. But I do keep the books, and keep track of the cows. We have all the cows numbered and we write down all the calves. I have binoculars that give me some pleasure in looking around the countryside.

Rose Horn died peacefully at her home in McCoy, Colorado, on December 12, 2015. She was preceded in death by her husband, Ray. She is survived by four sons and their families. The Horn Ranch is today one of Eagle County’s premier cattle ranches.

This interview was shared by Charlie Ramstetter.

END_OF_DOCUMENT_TOKEN_TO_BE_REPLACED

Where the dead get to tell their story By Jaclyn Schrock On Saturday, August 21, the Gilpin Historical Society held their annual Cemetery Crawl. Tickets allowed the shuttle of hundreds of guests from the Teller House parking lot to the Cemetery. Depending on v... END_OF_DOCUMENT_TOKEN_TO_BE_REPLACED