A Tailing Tale of Mining Books and Elmore 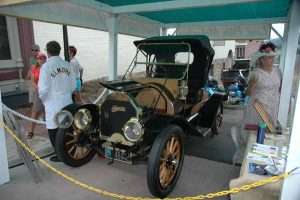 This past Saturday, I spent the day in Central City at the annual Beer Fest and was blessed to meet and converse with many of the attendees interested in Peter McFarland’s 1906 Elmore and my “Misadventures of the Cholua Brothers” series. Many stopped by to mention how much they enjoy my column, and I’d like to thank everyone for their kind comments and say it was such a pleasure to be able to visit with you.

My attendance at the event was to launch the second book in the “Misadventures of the Cholua Brothers” series called “Pistols and Petticoats.” For my readers who are not aware of my fictional series set in Black Hawk and Central City during the gold rush of the 1860’s, the first book, “Dead Man Walking,” launched last fall and the third and final book in the series, “Bonanza Beans,” will launch later this fall. As the author, I implement historical facts and add a twist of humor in an effort to bring to life the legendary ancestors of two modern day, coffee slingin’ gold miners. The series follows Dane and Jake Cholua through hardships, challenges and romance in their never-ending quest to find gold.

In Book 1, “Dead Man Walking,” Dane and Jake find gold in Black Hawk Pointe and have their claim stolen by a mysterious stranger who they meet through a prodigious twist of events. With the aid of their good friend, John Schmidt, the brothers seek justice and continue their quest to find that high producing mining claim.

In Book2, “Pistols and Petticoats,” Victoria Cashman is determined to learn who took the life of Ben Rumson, and why. When her sister, Ruby, shoots a member of the infamous Bummer’s Gang, the truth is finally revealed. The ladies surprise everyone with their hidden talents and win the hearts of Jake and Dane Cholua.

However, enough shameless promotion of my book series… The Beer Fest was great fun, with awesome music, yummy culinary delights, and humorous gun battles presented by the Wild Bunch. We had ringside seats for the shootouts, and witnessed firsthand the delightful antics of the crazy gun slingers, the sheriff, and sweet Annie. I understand the beer was pretty good, too.

Several months ago, I wrote a column about Peter McFarland’s Elmore and the owner, Donald Vaughn of Golden. At that time, Don told me that if ever I was conducting a book signing anywhere that had room for the Elmore, he would be there. True to his word, Don brought the car to Central City for my launch of “Pistols and Petticoats.” However, Don didn’t just bring the car. He built a huge canopy with yellow banners announcing, Lord Peter McFarland, The Richest Square Mile on Earth, and “Peter McFarland’s 1906 Elmore. He brought his mechanic, Rick Holdaway, and a team of three assistants, dressed in lab coats emblazoned with “Elmore” across the back and on the front pockets. Don made the launch much more than I could have ever imagined.

Throughout the day, attendees of all ages stopped by asking questions about the car and admiring the beautiful craftsmanship and the amazing restoration work Don spent over twenty years completing. Even small children were wide eyed at the shining brass fixtures and the polished black auto body of the old car, as their parents and grandparents explained how this was one of the earliest automobiles ever manufactured. Many asked questions like, “What kind of fuel did it use?” and “How did the headlights work?” Others wanted to know, “Does it run?” and “How fast will it go?” It is a gasoline powered engine. The headlights work on acetylene gas created in a canister on the driver’s side of the car where calcium carbide mixed with water. The gas then traveled up a tube to the headlights where the escaping gas was lit. It does run, though Don and Rick are still working to get it to run smoother. Don has driven the Elmore as fast as 50 mph, but he adds, “That was going downhill.” And even though the steering wheel is on the opposite side of what we American’s are used to, the automobile was built in the United States, in Delphi, Ohio.

After over thirty years of being hidden away in storage and then in Don’s garage, we were thrilled to be able to present the Elmore for its inaugural presentation in Central City. Being the first automobile to arrive in Central City or Gilpin County, it is truly a piece of Colorado, Gilpin County and Central City history. Many thanks to Kara Tinucci and her committee for their assistance in making this presentation possible.

Several folks who stopped by mentioned stories they would like to share with me, and I look forward to meeting with them and sharing their stories with all of you. If you have any stories about family or acquaintances who lived in Gilpin County or the surrounding areas, please contact me. You can reach me at 303-881-3321. Email me at Maggie@Maggiempublications.com, or mail me at P.O. Box 6571, Westminster, CO 80021. Be sure to check out my website at www.MaggieMPublications.com for past columns, upcoming events, or to order a copy of one of my books.

END_OF_DOCUMENT_TOKEN_TO_BE_REPLACED

Benefitting the county, schools, and much more By Don Ireland   This year marks the 30th anniversary of casinos opening in the former little mining towns of Black Hawk, Central City and Cripple Creek, Colorado. In those early years, smoking was allowed inside ... END_OF_DOCUMENT_TOKEN_TO_BE_REPLACED