A tailing tale of medicine in the Old West 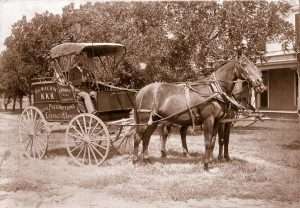 Technology exploded during the Gilded Age – the steam engine, electricity, the telegraph – marvels to behold! One would think medicine and health care would be right on track. Unfortunately, this was not the case. “Knife and pain” were two words ingrained in the surgery-bound patient’s mind. Bloodletting (as much as a pint a day) was still the “sure” technique to cure most illnesses – even into the late 1870s.

The brave folks who headed west discovered a new ailment: malaria, also known as the ague, which struck its victims with fever and chills. Very few escaped this disease. It was so common to Western life that people considered it normal: “He ain’t sick. He’s only got the ague” was an oft-heard remark.

Doctors were rare, if you could call them doctors at all. These so-called physicians could make two to three times more money in the cities than in the country, so why would they hang their shingles out West? The only treatment folks usually received was “He purged me, he bled me, he poked me, and he never cured me.” So whiskey often served as a quick and effective painkiller – it made the patient dead drunk.

Maybe you have complained about the high insurance and medical costs these days. Who has not? However, take a look at what people paid for their health care in the late 1800s.

Then again, anything you paid back then for services was too much, considering the actual, legitimate care you most likely received in return:

–House call (per mile): 50 cents – This could get expensive if you lived on a remote ranch 20 miles out of town.

–Some doctors charged less if you fed his horse

When you think that the average working-class family earned about $10 a week, it is obvious that most folks could hardly afford private medical attention. However, the bloodletting, purging, sweating, etc. provided to the wealthier class may not have been a disadvantage, and those average folks who did without the medical care probably lived longer.

The average patient had no clue if the new doctor in town who just hung up his shingle on Main Street was legitimate or not. The lack of education and proper licensing exposed the sick to all kinds of quacks posing as physicians. The medical field in those days did not attract the sons of the elite, but instead attracted folks who saw a chance to get rich quick. Most medical schools were only diploma mills that required students to take two, 4-6 month courses, with the second session being a repeat of the first. Even Harvard Medical School, which did have higher standards, rejected the idea of requiring a written examination for their graduates in 1869.

The doctor based his diagnosis of the patient on guesswork, and the cure was very unreliable. Sometimes the patients recovered, but more often they did not – especially if any kind of surgery was involved. During this “kitchen-table surgery,” the rural doctor was generally indifferent to any kind of cleanliness. Some of his instruments were not even rust-free. The doctor kept the sutures strung through his lapels or between his teeth for a handy reach. The phrase, “What doesn’t kill you only makes you stronger” took on an all-too-serious meaning in the Old West.

The next time you visit a friend in the hospital, look around and send a prayer upwards that this place actually helps people get well rather than sending them quicker to the afterlife. Truly, the hospitals of the 19th century were the last resort for the poor. No person with any money at all would enter the doors of such a place, preferring rather to stay in their own, relatively clean and safe beds at home.

When you look at the news and wonder what our American health-care system is coming to, take a little trip down memory lane and try to imagine your health-care options of the late 1800s. Hollywood has glamorized most aspects of the Old West, but the truth is that the “Good Old Days” were terrible medically!

Susan K. Marlow from Tonasket, Washington, writes historical adventure about the Old West for children of all ages. Check out her latest series for middle-school boys Goldtown Adventures at www.goldtownadventures.com. Set in at the end of the California Gold Rush in 1864, these are great stories for elementary and middle school age children interested in the Old West and the Gold Rush days.

If you have not yet read the first book of the Misadventures of the Cholua Brothers entitled Dead Man Walking, it is now available locally at the Gilpin County History Museum and Cholua Brothers Old Time Coffee Store. It’s also available at Amazon.com, Lulu.com, BarnesandNoble.com, and MaggieMpublications.com. The second book called Pistols and Petticoats will be available in July 2015.

END_OF_DOCUMENT_TOKEN_TO_BE_REPLACED

Benefitting the county, schools, and much more By Don Ireland   This year marks the 30th anniversary of casinos opening in the former little mining towns of Black Hawk, Central City and Cripple Creek, Colorado. In those early years, smoking was allowed inside ... END_OF_DOCUMENT_TOKEN_TO_BE_REPLACED