A tailing tale of Mae West in Central City 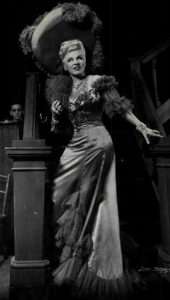 “Come Up and See Me Sometime”

When Mae West arrived in Denver in July 1949 to perform her play, “Diamond Lil,” at the Central City Opera House, it seemed as if she was the biggest star ever to visit Colorado. Along with members of the Central City Opera staff, state and city officials greeted West and the rest of the play’s cast when they arrived at Union Station. Festivities included performances by the University of Denver’s Dudes and Dames square dancers, the university’s cowboy band, contestants in a Mae West look-a-like contest, and Morris Sharp and his orchestra. There were live radio broadcasts from the station platform, and then West was presented with the Distinguished Denver Citizen award.

From Union Station, West and the rest of the cast went to the state capitol, where Governor William Knous greeted her, and named her a Distinguished Citizen of the West and presented her with a cowboy hat. After the ceremony ended, West and the cast, the dancers, the Central City Opera ushers, and the look-a-like contestants paraded through downtown Denver in antique cars. As soon as the parade broke up, the highway patrol escorted the cast to Central City so they could begin rehearsals on what most newspapers called the biggest play to ever hit the old mining town.

In preshow publicity, West disliked being referred to as a “sex siren.” She told The Denver Post that she should be “portrayed for what she is…an actress of international renown, whose reputation ranks among the theater greats…a writer of distinction and merit…and, a lady of dignity, poise and grace.” To prove her point, West and the rest of the cast immediately started rehearsals after they arrived in Central City.

West was so committed to “Diamond Lil,” which was in the middle of a national tour at the time it arrived in Central City, that after spending her first night in Colorado at the Brown Palace in Denver, she spent the rest of her time in Central City, living in one of the Penrose houses across the street from the Opera House. She was a major star, however, so she demanded that she have two white limousines at her disposal at all times. They were kept parked on Eureka Street, and would even drive her directly across the street to the Opera House so that no one would see her crossing the street on foot.

The show opened on July 30, 1949, to a packed house. According to one critic from The Denver Post, “An enthusiastic audience which laughed at every double and triple entendre, greeted the famous and familiar lines with guffaws,” and gave the famous star a warm welcome. Even before the show began its initial run of twenty-five performances, tickets had almost sold out, but Central City Opera director Frank Ricketson informed newspapers that there were still good seats available. In fact, the show proved so popular that another week of performances added to the schedule shortly before the show completed its original three-week run. Opera officials referred to the demand for tickets to the popular show as “unprecedented.” It was the first time in Central City Opera’s history that a show had been held over for an additional week.

Only one mishap marred the performance of “Diamond Lil” when four Central City teenagers stole some of Mae West’s jewelry during a performance. West reported the robbery to Sheriff Ken McKenzie, and also broke the bad news that the thieves were going to be disappointed. As she later told the Weekly Register-Call, the four necklaces, six large bracelets, and six pins and clips, were all rhinestones. The value of them was about $50, though she had spent another $950 to create the pieces they were in. West’s personal maid and another person from the play went to Furness Jewelers in Denver and convinced the manager to loan the star a start of jewels for the rest of the show’s run. McKenzie reported that the teenage thieves managed to escape without a trace.

Between performances of “Diamond Lil,” West took part in many publicity stunts to keep the people of Colorado entertained, attending parties and receptions in Denver throughout the plays run. In early August, she was made an honorary member of the Lakota tribe, with Charles Eberhart and William Willoughby presenting her with a headdress. A week later, she attended a high society party held in the Baby Doe Suite at the Windsor Hotel in Denver. When the Opera added the additional week of performances, West went to Denver and promised to sign photos for the first twenty-five people who bought tickets at the Daniels and Fisher store. More than 800 people showed up to buy the remaining 250 tickets to the show, which sold out in less than half an hour. West celebrated her birthday while in Central City, cutting a cake at the Teller House, playing the piano, and signing in the Gold Nugget Bar (which also was in the Teller House).

Jack Foster of the Rocky Mountain News also persuaded West to have her chest x-rayed at the Metropolitan Building in Denver as part of a campaign to fight tuberculosis. West reluctantly agreed, and the x-ray showed that the famed star wore a corset. Life magazine ran the photo and story, using it to poke fun at the 57-year-old actress, much to Foster’s dismay, who leapt to her defense in a column in the News in September, the day after the magazine story appeared.

Mae West and “Diamond Lil” departed Central City on August 17, after having broken all box office records for the Central City Opera House up to that point. It had been quite a run, and decades after she left Central City, many people still fondly remembered their encounters with the famous star during her six weeks in the old mining town.

Many thanks to David Forsyth, Executive Director of Gilpin County Historical Society, for this tale.

END_OF_DOCUMENT_TOKEN_TO_BE_REPLACED

Where the dead get to tell their story By Jaclyn Schrock On Saturday, August 21, the Gilpin Historical Society held their annual Cemetery Crawl. Tickets allowed the shuttle of hundreds of guests from the Teller House parking lot to the Cemetery. Depending on v... END_OF_DOCUMENT_TOKEN_TO_BE_REPLACED