A tailing tale of Isabella Bird 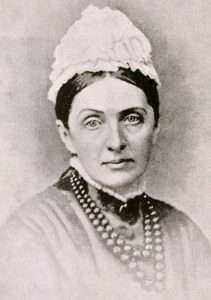 A Lady’s Life in the Rocky Mountains

Isabella Bird was a true explorer who defied Victorian expectations of how a woman was to live her life. At home in England she was constantly ill, but as soon as she embarked on a trip she miraculously healed. She said, “Travelers are privileged to do the most improper things with perfect propriety,” and “I still vote civilization a nuisance, society a humbug, and all conventionality a crime.” Isabella travelled through Persia, China, Japan, Korea, Tibet, Hawaii, and the Rocky Mountains. When she was seventy-years-old she rode through Morocco on the Sultan’s black horse.

From A Lady’s Life in the Rocky Mountains

Women were scarce enough in the West of the late nineteenth century, and a middle-aged English lady traveling alone, by horseback, was a real phenomenon. It was during the autumn and early winter of 1873 that Isabella Bird made this extended tour of the Rocky Mountains area of Colorado, when she was on her way back to England from the Sandwich Islands. What she called “no region for tourists and women” is today a popular resort.

Golden City, November 13 – Pleasant as Denver was with the Dewys and so many kind friends there, it was too much of the “wearying world” either for my health or taste, and I left for my sixteen miles’ ride to this place at four on Monday afternoon with the sun still hot. Passing by a bare, desolate cemetery, I asked a sad looking woman who was leaning on the gate if she could direct me to Golden City. I repeated the question twice before I got an answer, and then, though easily to be accounted for, it was wide of the mark. In most doleful tones she said, “Oh, go to the minister; I might tell you, may be, but it’s too great a responsibility. Go to the ministers, they can tell you!” And she returned to her tears for someone whose spirit she was doubtless thinking of as in the Golden City of our hopes. That sixteen miles seemed like one mile, after sunset in the rapturous freshness of the Colorado air, and Birdie after her two days’ rest and with a lightened load, galloped across the prairie as if she enjoyed it. I did not reach this gorge till late, and it was an hour after dark before I groped my way into this dark, unlighted mining town, where, however, we were most fortunate both as to stable and accommodation for myself.

Boulder, November 16 – I fear you will grow tired of the details of these journal letters. To a person sitting quietly at home, Rocky Mountain traveling, like Rocky Mountain scenery, must seem very monotonous; but not so to me, to whom the pure, dry mountain air is the elixir of life. At Golden City I parted for a time from my faithful pony, as Clear Creek Canyon, which leads from it to Idaho is entirely monopolized by a narrow-gauge railroad, and is inaccessible for horses or mules. To be without a horse in these mountains is to be reduced to complete helplessness. My great wish was to see Green Lake, situated near the timberline above Georgetown (said to be the highest town in the United States), at a height of 9,000 feet. A single day took me from the heat of summer to the intense cold of winter.

Golden City by daylight showed its meanness and belied its name. It is ungraded with here and there a wooden sidewalk, supported by posts, up to which you ascend by planks. Brick, pine, and log houses are huddled together, every other house is a saloon, and hardly a woman is to be seen. My landlady apologized for the very exquisite little bedroom which she gave me by saying, “it was not quite as she would like it, but she had never had a lady in her house before.” The young “lady” who waited at breakfast said, “I’ve been thinking about you, and I’m certain sure you’re an authoress.” The day, as usual, was glorious. Think of November half through, and scarcely even a cloud in the sky, except the vermillion cloudlets that accompany the sun at his rising and setting! They say that winter never “sets in” there in the Foot Hills, but that there are spells of cold alternating with bright, hot weather, and that the snow never lies on the ground so as to interfere with the feed of cattle. Golden City rang with oaths and curses, especially at the depot. Americans are given over to the most atrocious swearing, and the blasphemous use of our Savior’s name is peculiarly revolting.

Golden City stands at the mouth of Toughcuss, otherwise Clear Creek Canyon, which many people think the grandest scenery in the mountains, as it twists and turns marvelously, and its stupendous sides are nearly perpendicular, while farther progress is to all appearance continually blocked by great masses of rocks and piles of snow-covered mountains. Unfortunately, its sides have been almost entirely denuded by timber, mining operations consuming any quantity of it. The narrow-gauge, steel-grade railroad which runs up the canyon for the convenience of the rich mining towns of Georgetown, Black Hawk and Central City, is a curiosity of engineering. The track has partly been blasted out of the sides of the canyon, and has partly been “built” by making a bed of stones in the creek itself, and laying the track across them. I have never seen such churlishness and incivility as in the officials of that railroad and the state lines which connect with it, or met with such preposterous charges. They have handsome little cars on the route, but though the passengers paid full fare, they put us into a baggage car, because the season was over, and in order to see anything, I was obliged to sit on the floor at the door. The singular grandeur cannot be described. It is a mere gash cut by the torrent, twisted, walled, chasm, weather stained with the most brilliant coloring, generally dark with shadow, but its utter desolation occasionally revealed by a beam of intense sunshine. A few stunted pines and cedars, spared because of their inaccessibility, hung here and there out of the rifts. Sometimes the walls of the abyss seemed to meet overhead, and then widening out, the rocks assumed fantastic forms, all grandeur, sublimity, and almost terror. After two hours of this, the track came to an end, and the canyon widened sufficiently for a road, all stones, holes, and sidings. There a great “Concord Coach” waited for us, intended for twenty passengers, and a mountain of luggage in addition, and the four passengers without any luggage sat on the seat behind the driver, so that the huge thing bounced and swung upon the straps on which it was hung so as to recall the worst horrors of New Zealand staging. The driver never spoke without an oath, and though there were lady passengers, cursed his splendid horses the whole time. Formerly, even the most profane men intermitted their profanity in the presence of women, but “they have changed all that.” Everyone I saw up there was in a bad temper. I suppose all their “smart tricks” in mining shares had gone wrong.

The road pursued the canyon to Idaho Springs, a fashionable mountain resort in the summer, but deserted now, where we took a superb team of six horses with which we achieved a height of 10,000 feet, and then a descent of 1,000 feet took us into Georgetown, crowded into as remarkable a gorge as was ever selected for the site of a town, the canyon beyond apparently terminating in precipitous and inaccessible mountains, sprinkled with pines up to the timber line, and thinly covered with snow. The area on which it is possible to build is so circumscribed and steep, and unpainted, gable-ended houses are so perched here and there, and the water rushes so impetuously among them, that it reminded me slightly of a Swiss town. All the smaller houses are shored up with pines on one side, to prevent them from being blown away by the fierce gusts which sweep the canyon. It is the only town I have seen in America to which the epithet picturesque could be applied. But truly, seated in that deep hollow of the cold and darkness, it is in a terrible situation, with the alpine heights towering round it. I arrived at three, but its sun had set, and it lay in deep shadow. In fact, twilight seemed coming on, and as I had been unable to get my circular notes cashed at Denver, I had no money to stay over the next day, and much feared that I should lose Green Lake, the goal of my journey. We drove through the narrow, piled-up, irregular street, crowded with miners standing in groups, or drinking and gaming under the verandas, to a good hotel declivitously situated (on a steep hill), where I at once inquired if I could get to Green Lake. The landlord said he thought not; the snow was very deep, and no one had been up for five weeks, but for my satisfaction he would send to a stable and inquire. The amusing answer came back, “If it’s that English lady traveling in the mountains, she can have a horse, but not anyone else.”

END_OF_DOCUMENT_TOKEN_TO_BE_REPLACED

Benefitting the county, schools, and much more By Don Ireland   This year marks the 30th anniversary of casinos opening in the former little mining towns of Black Hawk, Central City and Cripple Creek, Colorado. In those early years, smoking was allowed inside ... END_OF_DOCUMENT_TOKEN_TO_BE_REPLACED