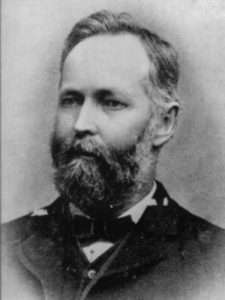 In 1850 Matt moved to South Bend, Indiana where he made his home with Hon. Schuyler Colfax, working for him as editor of the South Bend Register. When Colfax first ran for Congress, France was given charge of the newspaper.

In 1854, Matt relocated to Kansas, purchased 160 acres near Leavenworth, built a house and began farming.  He remained there for some years and witnessed much of the excitement incident to the slavery dispute in that state.

In 1860, failing health and the excitement of the discovery of gold in the Rocky Mountains caused him to join the marching columns heading west. After 43 days of traveling overland by oxen teams from St. Joseph, Missouri, Matt France eventually located in Central City in Gilpin County Colorado.

While in Indiana, France learned telegraphy; and in 1864, when the Western Union Telegraph was extended from Denver to Central City, he became an operator in that office. He was later promoted to the position of manager and continued there until the end of the Civil War in 1867.

In the later part of 1865, Matt moved to Georgetown, Clear Creek County, where he engaged in mining with Joseph Watson. They opened the Brown Mine of the Republican Mountain and the Baker Mine on Baker Mountain.

In 1870, he sold his mining interests and moved to El Paso County where he purchased a ranch at the Old Jimmy Camp Mine. For many years he continued in the cattle business and was an active member of the Colorado Cattle Growers Association.

Mr. and Mrs. France made Colorado City their home until 1871 when Matt built a residence in Colorado Springs. He was elected county commissioner for three years; and in 1878 elected mayor of Colorado Springs, then reelected in 1880, a position he subsequently resigned. During this period of service most of the roads in the county were built, among them Ute Pass road, which cost $15,000. This being a fine road to Leadville, it turned the tide of travel through Colorado Springs and in that way aided in the building of the city.

On disposing of his cattle business in 1886, Matt gave his entire attention to mining and opened and developed the Silver City Mine in New Mexico, the Great American Mine in Arizona, and the Sheriff Mine in Cripple Creek.

In 1890 Governor Job A. Cooper appointed Mr. France register of the State Land Board. In 1891, after a year’s visit in California, he went to Denver and continued in that position under appointment of Governor John L. Routt. In the fall of 1896, he was elected county commissioner and took his seat in January 1897 to serve until 1900.

The first two books of my Misadventures of the Cholua Brothers series are available at Mountain Menagerie on Main Street in Central City, Colorado; at www.amazon.com, www.lulu.com, and www.barnesandnoble.com.