A tailing tale of cattle drives and 8th Grade graduation 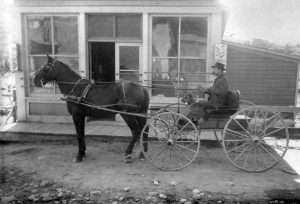 From “Life in the Early Days” By James K. Ramstetter (1910-1996). Permission of use granted by Mary Ramstetter

The last big job of the year was to get the livestock that was saleable to the Denver Livestock market on Monday morning when prices were at their best.

We started in the springtime of the year taking care of the new crop of calves the cows gave birth to. During the summer and fall the cattle were moved from pasture to pasture, so they would have the best grass to graze on. When fall came, the cattle were separated into two groups. One group was kept over to the next season for breeding to produce the next year’s crop of calves, the other was to be taken to market.

The trip to Denver from our ranch area was about 25 miles. The movement of the cattle had to be carefully planned so we could end up at the stockyards sometime Sunday night or early Monday morning. The cattle we rounded up Saturday were moved to a holding corral in Golden known as the Eagle Corral. On Sunday morning, we started the final move to Denver. The route we followed was Forty-fourth Avenue which started at the east end of Golden and extended for over fifteen miles into the north part of Denver. After entering north Denver, we would pass through an area known as Globeville and then into the stockyards.

We did not have much trouble coming out of the mountains; however, from Golden to Denver was a different story. It would take from twenty to thirty minutes to get through a street intersection. This was usually done by two riders on horseback who would guard the intersection to keep the cattle from going astray. Every so often it would be necessary to help the accumulated auto traffic to get through the herd. This was done by three people on horseback riding tightly together and making a path through the herd of cattle—the auto traffic would follow the horses closely. Passing through Globeville, some of the cattle would get into people’s yards, often coming out on the street carrying a clothesline loaded with clothes attached to their horns. Fortunately, we were only a few blocks from entering the stockyards pens.

After getting the cattle into the stockyard pens, we would have the long journey back home. This usually took a full day. We were thankful that this task happened only once a year. A week later we would get a letter from the commission telling how much the cattle brought. A check was usually enclosed for that amount less any fees, commissions and any other charges.

It was the month of May, the year was 1925, and it was time for one of the most important events of my life. There were eight of us graduating that day from the eighth grade, probably one of the largest classes that ever came out of the Guy Hill School. Due to the scarcity of teachers, my mother was the teacher, so I was under constant discipline to maintain the best of behavior. My twin brother, Ralph, also graduated with me, along with our cousin Elsie, Louise Woodruff, Lucille Foster, Herman Nelson, Kenneth Adams, and Levitt Booth.

The graduation exercises were held at our grandparents’ place in the evening, upstairs in the large meeting room. The whole neighborhood turned out for the occasion. For entertainment our mother made arrangements for a large music store in Denver, Knights-Campbell, to bring out the latest in radios. The radio was supposed to be a large, eight-tube, Superheterodyn model with a portable antenna that would bring in most of the big radio stations in America. We were all hoping it would get station KMOX in St. Louis which had a good band.

All members of the graduating class were seated on a long narrow couch. Our cousin, Elsie, recited the predictions about the members of the class, and then we were presented our diplomas by the superintendent of Jefferson County Schools. We then had refreshments and readied for the entertainment.

The music company set the radio up but had trouble tuning out a number of stations that interfered with the stations that were wanted. We were lucky. The regular neighborhood musicians had brought their instruments along, as they figured something would not work out, and we had our regular country music.

From Maggie: If you have any interesting stories about family or acquaintances who have lived or still live in Gilpin County or the surrounding areas, please contact me. You can reach me at 303-881-3321. Email me at Maggie@Maggiempublications.com, or mail me at P.O. Box 746495, Arvada, Colorado 80006-6495. Be sure to check out my website for past columns at www.MaggieMPublications.com.

The first two books in my Misadventures of the Cholua Brother’s Series are available on my website, on Amazon.com, Lulu.com and BarnesandNoble.com for $12.99 ea. + shipping. They can also be bought through the Gilpin Historical Museum and Mountain Menagerie in Central City. Watch for the release of the third and final book in the series Bonanza Beans. Available Spring 2016. Cholua Brothers Mining Company specialty coffees can also be purchased at Mountain Menagerie in Central City or from their website at www.choluabros.com.

END_OF_DOCUMENT_TOKEN_TO_BE_REPLACED

Where the dead get to tell their story By Jaclyn Schrock On Saturday, August 21, the Gilpin Historical Society held their annual Cemetery Crawl. Tickets allowed the shuttle of hundreds of guests from the Teller House parking lot to the Cemetery. Depending on v... END_OF_DOCUMENT_TOKEN_TO_BE_REPLACED