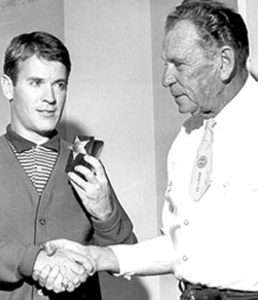 Many thanks to Bruce and Janice Jones of Gilpin County for providing information on Captain Ozie Waters. Back in the day, Janice delivered the Denver Post in Gilpin County and worked for Safeway in Golden. On occasion, she picked up groceries for Captain Waters and delivered them to him in Central City, and Waters gave her one of his albums. Bruce says he only knew Ozie to say “Hi” when passing on the street, and he learned most of what he knows about the man from old articles in the Weekly Register-Call. The information sent me by the Joneses directed me to a web page compiled by Ozie’s cousin, Jo Herring at www.albemarlecallaway.com/pictures/waters.

Vernon Scott Waters was born December 8, 1903 on a farm in Fulton, Missouri. During World War II, he served two tours in the U.S. Navy. His first stop was in Pearl Harbor, where he made his first radio appearance playing his guitar and singing. While serving in the Navy, Waters and his band, the Colorado Rangers, received citations from the U.S. Government.

Waters was given the name Ozie when he appeared on radio and was billed as the Ozark Rambler. During the 1930’s, Colorado Governor Edwin Johnson commissioned Ozie as a Captain in the Colorado National Guard Rangers. Ozie is quoted as saying, “It doesn’t mean much—just an honorary thing. More or less like a Kentucky colonel.” But that name was enough to give him the stage name of Captain Ozie Waters.

In the late 30’s or early 40’s, Ozie married Evangeline Baird and they had three daughters; Darlene, Melody, and Gloria. The girls and Evangeline sang with Ozie on occasion, and in 1949 Darlene appeared in Walt Disney Studios production, So Dear to My Heart.

Captain Ozie’s career grew to include appearances as a singing cowboy and movie picture star. By 1950, he had appeared in 16 movies with Columbia and United Artists, including several Hopalong Cassidy films.

In the 1940’s and 1950’s nearly anyone in Colorado recognized the name Captain Ozie Waters. He had a children’s television show and radio program broadcast from Denver. He appeared at numerous civic events, celebrations, annual meetings of service clubs, and fairs. An appearance with Hopalong Cassidy at Elitch Gardens in 1950 drew over 30,000 kids. During those years he wrote several songs of his own and cut a number of records for three labels: Decca, Coast and Coral. His recorded version of Cool Water was selected by the Library of Congress for its archive collections.

In 1952, the Waters family moved from Denver to 15 acres on the edge of Central City. Ozie said, “We thought we’d move up here and get a little peace and quiet. And we wind up in Grand Central Station.”

Although, I’ve been unable to confirm the information, it appears that at some point in the 1960s, Ozie served as Marshal of Central City. In an article on www.westernclippings.com Will Hutchin’s shared that in 1963 he received a deputy marshal badge from Captain Ozie Waters, “The Singing Marshal of Central City, Colorado” (the richest square mile on earth!) At the time, Hutchins was performing in “Never Too Late” at the Central City Opera House.  Hutchins said, “Ozie was a grand fellow, but he was frustrated with there being no crime. So he made me his deputy. He needed someone to play gin rummy with.”

In the 1970s, Ozie recorded and produced two albums entitled Central City Favorites – Volumes 1 and 2. These could be ordered from Ozie at Columbine Records, Box 1 in Central City, and he would pay the postage. Ozie’s friend Joe Lambert, an auto body repair man from Golden, did not appear on the two records, but Ozie said, “From now on the act is going to be Joe and me.”

In June 1975, in tribute of Captain Ozie’s contributions for more than fifty years to the cause of Country Western and Dixieland music, the Country Music Foundation of Colorado presented Waters with its Pioneer Award.

In the late 1970s; during lunch hours and on weekends, Ozie and Joe performed at the Silver Slipper Saloon, where audiences responded with enthusiasm to the Captain’s spirited guitar and melodious voice and Joe’s amplified guitar.

According to the March 20, 1977 edition of the Denver Post, Joe and Ozie would stroll onstage, wrestle with the straps of their guitars, lay their cigarettes into blackened ash trays, and Ozie would say, “Well, what’ll we start with?” Joe would strum a few notes that might suggest the opening of Tumbling Tumbleweeds. Waters would cover the mike with his palm, lean toward Joe and whisper, “Bye, Bye Blues.” He would tap his toe four times to establish tempo, and they were off and running. And it was straight jazz.

It was difficult to put a brand on Captain Ozie Waters’ music. He was probably most closely identified with cowboy songs like Tumbling Tumbleweeds; Down in the Valley; Empty Saddles In the Old Corral; Cool Water; Red River Valley. However, during Joe and Ozie’s two or three hour performances, Captain Waters sang more ballads, popular, jazz and folk songs than country western. He and Lambert were never content with simply hitting chords on the beats of a measure. They played lively, spirited guitars and Ozie loved Dixieland music.

Ozie was no “rhinestone cowboy” but appeared at the Silver Slipper and on the streets of Central in his sheepskin coat, Pendleton wool shirt, Levis and dusty cowboy boots—looking more like he just stepped down off a horse and not out of a bandbox. However, he referred to himself as a hillbilly, not a cowboy.

From Maggie: My “Misadventures of the Cholua Brothers Series” Book 1- “Dead Man Walking,” and Book 2 -“Pistols and Petticoats” can now be purchased from the Cholua Brother’s Coffee section in Mountain Menagerie on Main Street in Central City. Copies of “Dead Man Walking” are available at the Gilpin County History Museum. Copies of either book can be purchased on my website at Maggiempublications.com, Amazon.com, BarnesandNoble.com and Lulu.com.

Please plan to stop by and see me at this year’s annual Tommy Knocker Bazaar, Saturday, December 5th and Sunday December 6th, at the historic Teller House in Central City.

END_OF_DOCUMENT_TOKEN_TO_BE_REPLACED

Benefitting the county, schools, and much more By Don Ireland   This year marks the 30th anniversary of casinos opening in the former little mining towns of Black Hawk, Central City and Cripple Creek, Colorado. In those early years, smoking was allowed inside ... END_OF_DOCUMENT_TOKEN_TO_BE_REPLACED

Where the dead get to tell their story By Jaclyn Schrock On Saturday, August 21, the Gilpin Historical Society held their annual Cemetery Crawl. Tickets allowed the shuttle of hundreds of guests from the Teller House parking lot to the Cemetery. Depending on v... END_OF_DOCUMENT_TOKEN_TO_BE_REPLACED