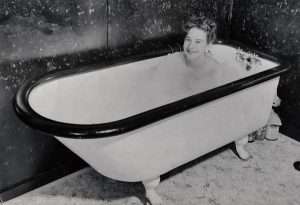 Born January 10, 1933 in Chase Gulch, Dolores Blake Spellman proudly states she is the oldest native resident still living in Black Hawk. As I sat down with the town matriarch recently, she pointed out on a picture of the town every location that has been an integral part of her life for the past eighty-two years. With the sweetest smile, sparkling eyes, and her beautiful gray braid piled atop her head, she pointed to each location. “This here is Chase Gulch where I was born. This is where I was raised, in the Gilpin Hotel. This is where I went to school, and this is where I still go to church, at St. Mary’s in Central City.”

She handed me a 1944 copy of The School Musician (A national magazine) and pointed out an article written about the Black Hawk School Band. She said, “You want to talk about the band?” She had the magazine open to the pages where a reporter covered Black Hawk’s School Band and she said, “There’s not a whole lot to say, but just recently I read this article again and thought people might like to know what they said about Black Hawk, and how the school had 22 students and 17 were in the band.” With great enthusiasm, she went on to explain. “We did have a good band and Miss Gibbons, was our teacher. It was a one-room school. She taught my dad, too. She was there forever. The idea about the band was that we were so little and so poor a town, except we had this fantastic little band, thanks to this man who was a great band teacher. His name was George Roy. I played the clarinet. We had to buy our own instruments and Mr. Roy wouldn’t let us have the instruments until we could name the notes and keep time and that.”

Then she showed me a program from 1944 for a performance of Paul Loses the Ration Books, and she said, “Back then, Fritz Hall was above where Johnny Z’s is now, and that was where we had our programs.”

I asked Dolores to tell me what it was like to grow up in Black Hawk. She explained that she and her sister, Elizabeth, were born at the house in Chase Gulch where Professor Robert Cameron now lives. Then in 1944, her parents, Ruth and Otto O. Blake purchased the Gilpin Hotel. Dolores said, “When they bought the Gilpin, Mama borrowed $300 from Joe Barzago who had Barzago’s Grocery Store. It was a lot of money in the 40’s, but the building was in pretty good shape. Mama hired a paper hanger named Papa Conrad, or something like that, and he stayed there at the hotel until he finished hanging all the paper.”

Then she asked me, “Have you ever heard of Dic-A-Doo?” I had to admit that I had not, so she explained, “It was a cleaner and Sissy and I scrubbed all the woodwork in the hotel with Dic-A-Doo. And there was this one room that was dedicated to the pigeons. The family that lived there – and  I’m not sure if they were squatters, but they weren’t paying any rent – but anyway they had broken out a window on the third floor and setup bedsprings for the pigeons to roost in, so we had to clean that room really good.”

In 1945, Dolores’s youngest sister, Linda, was born and joined the rest of the family at the Gilpin. Not long after that, Dolores recounts how her grandmother became seriously ill and came to live with them so they could care for her. At that time, there were twenty rooms and one bathroom and Dolores fondly recalls a swamper that worked for her mother by the name of Carl James. “One thing I will always remember that Carl did for me was when Grandma was bedridden. We had the one bathroom and we had to carry the potty down this hall, up the stairs and down another hall, and I was going up the stairs one day and I fell. Carl helped me clean it up.”

Later, Otto installed a downstairs bathroom off the kitchen for the family. Dolores chuckled and told me, “It wasn’t long before the guests learned of that bathroom and they were using it too.”

She recalled, “We did all the washing with the old washing machine and we hung our clothes out back of the Hepburger house (the old Wild Card casino). We hung the clothes out there and when Sissy and I came home from school, we’d take the sheets off the lines and put them on the beds. Mama did have people help out in the season, but we did a lot of making beds and carrying coal for the pot-belly stoves in all the rooms. We didn’t have to work elsewhere because Mama kept us plenty busy.” In 1946, Dolores also kept busy helping her grandmother clean the Central City Opera House and many years later Dolores was a tour guide at the Teller House and Opera House.

She said, “We had some great times at the Gilpin, lots of holiday celebrations and I had my 16th birthday party there. Mama had a surprise party and invited my friends from school.” She explained, “We don’t have many pictures from back then because we couldn’t afford the camera and film, but we had lots of good times.”

Black Hawk in those days was very poor, and Dolores said during the years they owned the Gilpin, from 1944 to 1953, the hotel never made any money. If Otto hadn’t worked for the mill, then for the county and later for Coors, they couldn’t have kept it open as long as they did. She said, “I remember when the welfare people came to the house with commodities and dresses for my sister and me. They were all alike – they were blue, red and yellow check. That was after the Great Depression was over.”

After Dolores graduated from high school in 1951, she went to Denver to find work and landed a job as a soda jerk at Walgreen’s, but that didn’t work out because she said she was never very good as a waitress. She said, “When Mama had the dining room at the Gilpin and I tried to serve people, I would spill soup down somebody’s neck.”

Then she landed a job as a receptionist for Tolin Air Conditioning. She stayed at a boarding house in Denver, but came back to Black Hawk to the Gilpin with regularity, and that is where she met her husband of over 60 years, Bill Spellman. She recalled with great fondness and humor how Bill came to Black Hawk from Kansas to be an author. He travelled there with an artist friend, and after he saw Dolores, he was determined to woo her. He even went so far as to bribe one of her school friends, Douglas Prentice, to give him her telephone number. And as she said, “The rest is history.” They were married at St. Mary’s Church in 1954 and after the birth of their daughter, Sandra, in 1955, Dolores stayed at home to raise her children. She said she would babysit other children and take in odd jobs. And later she and Bill had sons Mark and David. She laughed and told me, “Can you believe we raised three kids in this little house?” Bill and Dolores still live in that little home; it is the pretty, purple house above the new post office and park area.

Dolores and her family (Blakes and Spellmans) have been a driving force in the City of Black Hawk since its beginnings when the first Blake dipped his pan into the creek looking for gold in 1859.

Dolores worked for over twelve years at the Lodge Casino and the Gilpin, and has always been a strong advocate of gaming in Black Hawk. She was instrumental in getting the beautiful chimes installed that ring out from the old schoolhouse every day from 8 a.m. to 10 p.m. This was a quest she set out to accomplish nearly ten years ago by proposing the petition and gaining the approval of the town council.

Today, you’ll still see Dolores and Bill at city events and walking around town. Black Hawk is their home. Unlike others who bailed when the going got tough, they have no plans to leave the place Dolores refers to as our “Heaven on earth.”

END_OF_DOCUMENT_TOKEN_TO_BE_REPLACED

Where the dead get to tell their story By Jaclyn Schrock On Saturday, August 21, the Gilpin Historical Society held their annual Cemetery Crawl. Tickets allowed the shuttle of hundreds of guests from the Teller House parking lot to the Cemetery. Depending on v... END_OF_DOCUMENT_TOKEN_TO_BE_REPLACED