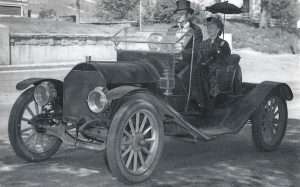 Awhile back, I had the pleasure of spending a few hours with Donald Vaughn of Golden, and hearing his beautiful story about a woman, an automobile, and his deep respect and affection for both.

In 1991, Donald worked on Luella Thomas’s home, and during that time, they became great friends. Luella, then in her 70s, shared many stories with Donald about growing up in Central City, and in particular tales about a 1906 Elmore automobile owned by Peter McFarlane. Luella recalled how as a child she made many delightful trips with Mr. McFarlane over the Virginia Canyon road when he had business to attend to in Idaho Springs, and how he always addressed her as “Little Miss Curls.”

Luella remained a close friend to the McFarlane family, and over the years, she and her husband, Joseph, borrowed the car from time-to-time to drive in various events. She fondly recalled one such occasion in 1927 when they borrowed the Elmore and then drove it to Denver to take part in the parade and festivities of the Elk’s National Convention.

She said as they proceeded down 16th Street, as a unit of the parade, a man by the name of George Williams leaped from the curbing and onto the Elmore saying, “Where did you get this car?” He stayed with them the remainder of the day and reminisced about how in 1912, accompanied by his brother Joseph, W.M. Oliver and Tony Cessario, he drove up from Denver on a Tuesday morning to deliver the Elmore to Peter McFarlane. He said they left Larimer Street and made the trip to Central in one hour and 55 minutes, actual running time, in the 30 horsepower Elmore, coming by way of Golden, over the old stage road via Guy Hill, and then down Dory Hill through Black Hawk.

Luella told how Mr. McFarlane much preferred his horse and buggy to the Elmore and how after his death in 1929, the car was stored for many years in the Baleria Bottling Works, located at the corner of Spring and Gregory Streets.

In 1936, Luella’s husband, Joseph and his brother-in-law, J. Gilbert McGrath, purchased the Elmore from Peter McFarlane’s sons, Fred and George McFarlane. By 1972, the Thomases had fully restored the car. They added a new cloth top over the original bows and new leather upholstery on the seat to replace the original, which had deteriorated over the years. Otherwise, they were able to retain most of the original parts. They did have to replace the horn, which someone stole when the Thomases stored the vehicle in one of their mines.

In 1972, Luella told in an article in the Weekly Register-Call of how the car was one of only eight in existence. Through Donald Vaughn’s research, he has learned it may be even less than that, because most of the Elmores were sedans while the McFarlane car is a two-passenger roadster.

Throughout the years that Luella and Joseph owned the Elmore, they often dressed in period costume and drove the car through the streets of Central City and Black Hawk. Many opening days of opera season included the arrival of Luella and Joe in their costumes, accompanied by as many family and friends as could sit or stand on the Elmore.

She said the Elmore was always a “fun” car, and they often carried as many as eleven passengers from Central City to Idaho Springs, oblivious to the fact it is but a one-seat roadster.

After Joseph’s death in 1966, the Elmore was put into storage, where it remained until 1991 when Donald Vaughn was hired to do the work on Luella’s home. During the hours Don spent with Luella, it was obvious to him how important it was to her to one day get the Elmore running again. And so, he set out to do just that. The day the car sputtered and roared to life, Don drove Luella around her neighborhood and then returned to her house for a celebration. Luella had a number of photos taken to commemorate that day and she wrote the date on the back of the pictures. Don said, “It was a very important date to her, because the car had been a highlight in her life, and when she saw the car running again, she could not stop smiling. There were friends and neighbors at the party who shared the car warming experience and watched her glow in her memories of her life with her husband and the car that had been such a binding pleasure in those years.”

Don recalls also that, “She introduced me to the Central City Opera and sparked my interest in the richest square mile on earth.”

Several years later, Luella gave the car to Donald. She asked him to care for it, preserve it and always remember that it was more than just an automobile. It was a piece of history and the source of much joy to a great many people for many, many years.

Donald has done more than just take care of the Elmore. Owner of Able Piering, and a man who loves to dance and enjoy life, Donald has dedicated himself to restoration and enshrinement of the McFarlane Elmore, as well as retaining many historical records of Luella and Joseph Thomas.

He recently completed construction of a new home in Golden where he built a second garage for the specific purpose of housing the automobile. He commissioned the building of a model of the car, which he had encased in a glass box. He has many manila file folders filled with research on the car and its manufacture. With the assistance of Rick Holdaway, a mechanic who specializes in working on vintage automobiles, Donald has brought the Elmore back to its original magnificence and it runs like a top.  In addition to once again replacing the fabric top and leather seat, as previously done by the Luella and Joseph, Donald stripped the paint from the solid maple wheel spokes, and lacquered and polished them to a beautiful finish.

At the end of our meeting, Donald escorted me to the garage where he proudly revealed his pride and joy. The running boards were encased in bubble wrap, but the rest of the vehicle sparkled and shined like a new penny. He took time to show me how the old headlights worked from a canister on the side of the car, and you had to light each headlight like a candle. In the box on the back of the car, Donald has designed electronic boxes and switches so various features are highlighted when it is on display. It is truly a precious piece of history any museum would be proud to display.

END_OF_DOCUMENT_TOKEN_TO_BE_REPLACED

Benefitting the county, schools, and much more By Don Ireland   This year marks the 30th anniversary of casinos opening in the former little mining towns of Black Hawk, Central City and Cripple Creek, Colorado. In those early years, smoking was allowed inside ... END_OF_DOCUMENT_TOKEN_TO_BE_REPLACED

Benefitting the county, schools, and much more By Don Ireland   This year marks the 30th anniversary of casinos opening in the former little mining towns of Black Hawk, Central City and Cripple Creek, Colorado. In those early years, smoking was allowed inside ... END_OF_DOCUMENT_TOKEN_TO_BE_REPLACED