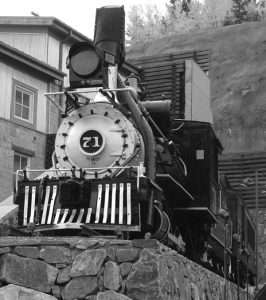 In 1885, two passenger trains, running narrow gauge cars, ran daily between Denver and the mountain cities, passing through Golden. One train left in the morning and one in the afternoon.

The following excerpts are taken from George Cruffuts narrative Grip Sack Guide to Colorado, published in 1885, where he shared his experiences aboard the Colorado Central Division of the Union Pacific Railway Mountain Division-Narrow Gauge:

While we waited in Golden, someone pointed to the mountains to indicate our direction and many were the conjectures and speculations as to the point of entering them, and the possibility of getting over or around the apparently impenetrable barriers. All were eager and every eye was on the alert when the “All Aboard” was heard.

In the throng was a little old man, who, from his appearance, was evidently an Irishman just from the “old sod.” When the train gently started directly for the high mountains, he thought surely something was wrong; a person running through the car confirmed his fear, and he rushed frantically up to the nearest passenger and asked excitedly, “Has the train got away?” “Does the guard know which way the thing is going?”

Presently the conductor – over 200 pounds of him – came along, and gave the assurance that “the thing” was going all right and that the train could easily get over the mountains.

Entering the mouth of the canon, we followed the creek in its tortuous course – in places far above – and then on a level with its banks, beside perpendicular cliffs and beneath overhanging walls a thousand or more feet in height. The whole scene changed with every revolution of the wheels. To be sure, so as not to miss any grand views, one had to keep alert and watchful at all times.

Three miles along, we passed Chimney Gulch, and then Guy Gulch in another three. Between these two gulches were many old placer claims, but little had been done in them since 1859-60.

Two miles further was Beaver Brook, the first stopping place so far on this route. Beaver Brook, a small stream, comes in on the left, down a narrow canyon, up, which, six miles distant, was located a sawmill in a perfect forest of timber. The scenery at this point was grand; the mountains were fully 1,000 feet above the road, on either hand, and covered in places with a dense growth of young pine and spruce trees, presenting the appearance as wild, picturesque and romantic as one could wish.

Leaving the station, our road made a 30-degree curve to the right, up a grade of 272 feet to the mile under a projecting spur of the mountain, which rose 1,500 feet above our train, while the creek was close, and thundering along down its narrow, rocky bed.

The little old Irishman, who had said nothing up to reaching this point, now exclaimed, “The moll that picked out this route must have been a perfect divil wid wings!”

Elf Creek and a sidetrack for passing trains was reached one mile above Beaver Brook. We continued climbing up between towering mountain cliffs, in places clothed with evergreen pine, cedar and spruce trees, with shrubs of various kinds, until we reached a point three miles above Elk Creek where the walls on the west side of the creek sloped away, and our train followed past Big Hill. Here the old Mt. Vernon wagon road comes down the mountain from the left, the grade of which in places is 34 to 100 feet. This road leaves the valley about two miles south of Golden, and after climbing the mountain via Mt. Vernon Canyon, to an altitude of 8,000 feet descends this hill and runs up the north branch of Clear Creek to Black Hawk.

Much of the machinery used in these mountains, in the days before the railroad, was hauled over this road. Where the grades were the steepest, the wagons were eased down by ropes secured by a turn or two around huge pine trees, beside the road, and at this time the marks of the ropes were to be seen on the stumps where they had peeled the bark, so taut were the lines. We know – of our own personal knowledge where it took ten men, besides their teams, nine days to lower down this hill one boiler, the weight of which was a little over seven tons.

Forks Creek, one mile further on, is the junction of the North and South Clear Creek. Here the route for Georgetown turns to the left, across the bridge, while that for Black Hawk and Central keeps to the right.

From this point to Black Hawk, seven miles, nearly every foot of the creek bed has been dug over, time and again, by miners, in search of gold. Dams have turned the waters of the creek, through flumes, first on one side of its bed and then on the other. The greater portion of the earth, from surface to bed rock, from one side of the gulch to the other, has been dug and washed over by white men, and when given up by them, has been jumped by the Chinese companies, many of whose people can now be seen daily, washing and working these old placer diggings over again.

Cottonwood, a milk ranch and sidetrack station, is two miles above the Forks, and two miles below Smith Hill. Proceeding onward and upward, about one mile above the station, we pass, on the left, the Old Excelsior and the Whipple Mills, now abandoned, except as shelters for a few Chinese miners who work along the creek.

By looking up the mountainside on the left, westward could be seen where the railroad track runs along, first to the south, then back to the north, gaining altitude at each turn, in order to overcome the heavy grade and allow our train to run into Central City.

We passed several quartz mills, across the creek on the west bank. Along the road, on the right, were the site and ruins of the first reduction works of the Boston and Colorado companies, whose present works are located at Argo.

Three miles above Smith Hill is located Black Hawk, a city of about 2,000 population, all of whom are engaged in mining, directly or indirectly.

From Black Hawk the wagon road to Central City leads up Gregory Gulch, west through old Mountain City. Leaving Black Hawk, we started on our zigzag tour to Central. After proceeding half a mile up North Clear Creek, our train stopped, the switch was turned and back it went, but not on the same track. It was climbing the world at a rapid rate. Then, it was directly over the city; then on the steep mountain side beyond, then, it thundered over high bridges that spanned deep, and fearful chasms, and stopped at the end of the two miles on the brink of a precipice 400 feet above the same road up which we came within the hour. Again forward and again climbing, the track ran parallel with the other two, but each far above the other.

Soon the train rounded the mountain spur opposite Black Hawk, but 400 feet above, affording the passengers a magnificent view of furnaces, stamp mills, and the railroad along which we came, and a grand view of Black Hawk and the surrounding mountains.

We then turned westward, heading off deep ravines or crossing them on high bridges over streets lined on each side with mills, stores and residences. The views of scenery were most varied and surprising. The changes were rapid and wonderful as those of the kaleidoscope. A few more revolutions of the wheels, and the train stopped at the end of the road, at Central City.