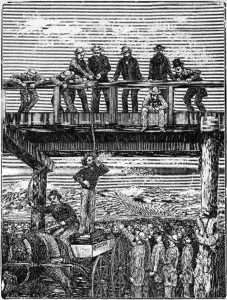 November 25, 1868 – Wrapped in the chilly darkness of night, Sam Dougan stands in the back doorway of the Jack Hill Saloon. Dougan, a member of the Musgrove-Franklin Gang, is wanted for a series of robberies in Denver and mining towns to the north. As he anxiously awaits the return of his friend Miles Hill with a second gun, he hears the click of a heel on the boardwalk. Forced to flee, the outlaw makes his way in the shadows of the short alley toward Washington Avenue. Beneath his long-coat he feels for the reassuring grip of his pistol.

Meanwhile, in the Jack Hill Saloon, Miles secures a pistol from under the bar, heads out the backdoor and finds Dougan gone. Hill sees movement and a glint of metal reflected at the edge of the alley. The door shuts behind him with a dull clunk, the night air explodes with gunfire and a spent bullet slams into the wall behind him. In panic he ducks and gropes for the door handle. Another shot spins Hill around sending him slumping to the ground, a pool of blood staining the dirt. At that moment, he knows he’s been shot through the lung and is dying.

Down the alley, hearing the gunshots, Dougan slips deeper into the shadows. Shouts accompanied by the sound of running feet echo through the night, “Stop Dougan! Dougan! I tell you stop!”

Dougan sees a figure some fifty yards away. The outlaw raises his pistol, aims at the dark form, fires and makes a mad dash toward Vasquez. A shot rings out, followed by humming through the air, smacking into the brush alongside Dougan’s pumping legs. In moments, he escapes into the darkness.

Several blocks away, behind the Overland Hotel, Sheriff Keith reloads his pistol and goes to the bottom steps that lead up to the room of Dougan’s partner, Ed Franklin. Accompanied by Marshall Cook of Denver and M.T. Smith of the Denver Police Department, Keith ascends the steps to Room 201. No more than five minutes have passed since the shooting of Miles Hill and the escape of Sam Dougan. The lawmen kick in the door, shattering hinges and forcing their way into the room.

A startled Franklin sits up in bed, an oil lamp illuminating his features and the protruding barrel of a pistol from beneath his pillow. Keith aims his gun at Franklin’s naked chest and says, “We want you Franklin. You’re under arrest for robberies committed in Denver.”

Marshall Cook walks to the side of the bed and pulls out his handcuffs, telling Franklin, “It’s no use making any fuss. I’ve got to put these handcuffs on you.”

On creaking bedsprings, Franklin jumps to his feet, bringing Sheriff Keith and Officer Smith to level their revolvers. Cook orders Franklin, “If you don’t give yourself up, Franklin, we’ll have to shoot you!”

Franklin lays closed fists on his chest and bellows, “Go ahead and shoot! There is the place to put it! Put it there!”

Sheriff Keith lowers his voice, trying to control the moment. “You might as well give up. You can’t get away.”

Marshall Cook grabs Franklin’s right arm in an attempt to secure the outlaw, but Franklin jerks free and sneers back at the lawmen. “You fellas need to give me a fair show!”

Smith steps quickly forward, lifts his pistol over his head and swings it hard against Franklin’s head. The outlaw tries to guard himself from the blow, but fails and falls forward on the bed. Cook lunges for Franklin’s arms, pins them back, and tries to put one cuff on the struggling fugitive. Franklin comes off the bed and stumbles back against the wall.

“You’d better give in, Franklin!” shouts Cook. “I’ve got to get these cuffs on you!”

Franklin expels a string of profanity, lurches forward and swings his fist at Cook. Cook steps back from the bed as Sheriff Keith takes a step closer, holding his pistol steady on Franklin’s chest. Smith closes in behind Cook. A moment of silent hesitation is followed by a shot from Cook. Before the shot dies away, another explosion fills the room. When the smoke fades, Franklin lays face up on the bed, blood draining from two large holes in his chest.

The Musgrove-Franklin Gang terrorized Northern Colorado and Southern Wyoming, committing murder, stealing livestock, and robbing law-abiding citizens. Authorities apprehended L. H. Musgrove and put him behind bars in Denver. Marshall Cook learned Franklin and Dougan planned to free Musgrove and set out to find and apprehend them before they could carry out their plan. Although Dougan evaded arrest the night of November 25th, on December 2nd, he was captured in Cheyenne, returned to Denver and lynched.

This is a true story, though there are a number of versions as to the exact details, but it most certainly would make an awesome scene in a novel or episode for a CSI program.

Stop by and visit me at Cholua Brothers Old Time Coffee Store in Black Hawk the weekend of June 6th and 7th. I will be signing copies of Book 1 of Misadventures of the Cholua Brothers Dead Man Walking. Mention this column and receive $5 off your already discounted $10 copy.

END_OF_DOCUMENT_TOKEN_TO_BE_REPLACED

Benefitting the county, schools, and much more By Don Ireland   This year marks the 30th anniversary of casinos opening in the former little mining towns of Black Hawk, Central City and Cripple Creek, Colorado. In those early years, smoking was allowed inside ... END_OF_DOCUMENT_TOKEN_TO_BE_REPLACED