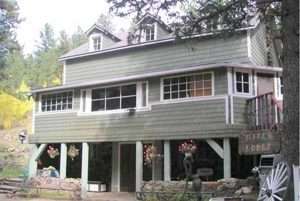 Of Winks Lodge of Lincoln Hills

During the 1920s, the Ku Klux Klan was at its height of power in Colorado. In the election of 1924, the Klan won control of the Colorado House of Representatives and saw its favorite, Clarence Morley, elected governor. Denver Mayor Benjamin Stapleton was friendly to the Klan and it was common to see crosses burning atop South Table Mountain on Monday nights.

At that time in Denver, the black population was at around 7,000, half of whom owned their own residences, creating a middle-class community. However, these citizens were prohibited entrance into the hotels, theaters, clubs or restaurants. It was against this backdrop of widespread discrimination and racial tensions that a group of black promoters formed the Lincoln Hills Development Company and in 1922 purchased land in northeast Gilpin County. They sold the mountain property to blacks to build summer homes at a time when they were not otherwise allowed to obtain lodging or enjoy the amenities of public parks in Colorado. Over 600 lots, 25’x100,’ were sold at between $50 and $100 each, depending on the location. Many people from New York, California, Nebraska, and Kansas bought up property sight unseen and Obrey Wendall “Winks” Hamlet of Denver purchased several lots on which to build a lodge.

Born in Chattanooga, Tennessee, in 1893 Winks moved into Denver’s Five Points neighborhood. He impressed his neighbors with his resourcefulness and ingenuity. He cut grass, did errands and odd jobs, owned an ice and coal delivery service, learned carpentry and by 1925 saved enough money to purchase land in Lincoln Hills. Scrounging for materials, Wink drove every nail himself. For the dining room wainscoting, he scrounged printing press plates from the first Denver Post building. He scavenged tin ceilings from Denver demolitions, cut aspen and lodgepole pines for the frame and beams, and hauled native rock for fireplaces. The building’s base and north walls he built of native rubble granite and authentic river rock. He primarily used the first floor for storage. The second floor had walls of windows surrounding the dining room allowing guests to admire the view of the forest and river below. On the third floor, he built six small bedrooms to be rented as guest rooms. The ever-resourceful Wink then built the only indoor shower in the area. Since the Pactolus Ice House and Mine were closing near Rollinsville around the same time that Wink was constructing the lodge, he purchased 15 worker’s cabins and moved them to his property to be used, along with six others he built himself. These included the orange cabin, where he lived while building the lodge; a honeymoon cabin; the tin house; a three-plex cabin, and the tavern.

Wink advertised nationally in Ebony magazine and the lodge drew people from across the country. Not only did the lodge boast an amazing location and view, but was infamous for its delicious fare. Brownie, Wink’s cook for many years, kept chicken coups in the backyard, the chickens in the closest coup ready for frying. Brownie guaranteed customers could pick their chicken and it would be ready to eat in one hour. In the 1940’s and ‘50s, as many as 100 people a day traveled up to the mountains to eat Winks barbecue, and famous musicians who played engagements in the Five Points clubs in Denver, including Count Basie and Lena Horne, stayed at Winks.

After Winks died in 1965, the business diminished. By 1971, his wife, Melba, had sold all of his Lincoln Hills properties. However, subsequent owners did not want his story forgotten. Bertha Calloway, a black historian who bought Winks Lodge with her husband, managed to get it listed on the National Register of Historic Places. In 2014, an amendment was added to the National Register listing for the property, including a boundary expansion of the Winks Lodge property and an elevated level of significance, deeming even more of the Lincoln Hills resort community as “historic.” More importantly, until 2014, Winks Lodge was listed as significant only to Colorado history. The 2014 update provides extensive research that demonstrates Winks Lodge was not only important to Gilpin County and to Colorado, but it’s significant to the history of the entire country. Now the US Department of the Interior, the National Park Service, and the National Register program, are collectively acknowledging, promoting and honoring that significance.

In 2006, Beckwourth Outdoors, a Denver organization devoted to providing outdoor recreation and mountain experiences for black youngsters, bought Winks Lodge. With help from Colorado State Historical Funds, today the Lodge has been returned to its original splendor and is part of the Lincoln Hills Cares program for intercity youth. For information on the programs and events at Lincoln Hills, check them out on the web at www.Lincolnhillscares.org.

Please check out Cholua Brothers Old Time Coffee Store Season opening on June 6th and 7th from 10 am to 5 pm. I will be signing copies of Book 1 in the Misadventures of the Cholua Brothers – Dead Man Walking. Mention this column and receive a copy at half price.