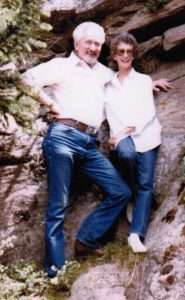 In 1931, President Herbert Hoover led our struggling country through the great depression. The U.S. adopted the Star Spangled Banner as our national anthem, and on May 7, George Nelson was born in a little hospital on the corner of Broadway and Alpine in Boulder, Colorado.

The first child born to Martin and Dollie Nelson, George’s earliest memories are of his life as a young boy in Rollinsville. The the only student in his grade level for nearly five years, like most young boys, George and his younger brother, Wally, were frequently up to mischief. Besides engaging in regular bouts of wrestling and fighting with one another, they smashed pennies on railroad tracks and got into trouble with their mom when they hiked up to the dam to fish.

In1942, Martin took a job keeping the road open for the miners at the Henderson Mine, on Berthoud Pass, just west of Empire, so the family moved into a small cabin there so George’s father would not have so far to travel to work. After spending part of the school year and the summer in Empire, that fall Dollie and the boys moved to Idaho Springs where the winters weren’t as harsh.

The next summer, the family moved into the original Nils Nelson homestead in Four-Mile Gulch in Black Hawk, and each day, George and Wally walked about a mile to the Black Hawk schoolhouse. Traversing through Four-Mile Gulch, they arrived in town in the area where the post office sits today.

Later in ’42, Martin and Dollie Nelson bought the old Van DeVeer place, west of the cemeteries up from Central City. The only boy in his class of three students, George graduated eighth grade from Central City Middle School and the following year he attended Central City high school – the numbers during those years were a bit more even with three boys and three girls.

George’s parent’s marriage was wrought with problems, primarily due to Martin’s practice of spending large sums of money for whatever he thought he needed at the time. It didn’t matter what something cost, if Martin felt he needed it he bought it. This often left the family with no money and only Dollie’s earnings from the grocery store kept food on the table. So finally Dollie took George and Wally and left Martin, moving into an apartment above Schobert’s Garage.

In 1948, Martin became County Commissioner and moved into town, each day returning to the ranch to care for the horses, cattle and milk cows. He frequently brought fresh milk to the boys and regularly butchered cattle and sold them to Ramstetter’s Grocery. Throughout WWII, Black Hawk and Central City always had fresh meat thanks to Martin Nelson and Ramstetter’s Grocery, quite a rarity for the times.

At some point in the late 40’s or early 50’s, Martin sold the former Van DeVeer house and bought the Stoehle house in Chase Gulch. Today, the City of Black Hawk owns the home and it is currently undergoing restoration. Locals call it “The Mansion.”

When George was fifteen-years-old, his mother remarried. Still living in Black Hawk, George took a job at the Teller House in Central City washing dishes. Over the summer, he saved up enough money so that by his birthday the following spring he was able to buy a ’31 Chevy coupe, for which he paid $300. He said, “That car would only go 55 mph, but it could climb a brick wall.”

At 16, George went to work for the Quiller Grocery Store. He got to school at 9:00 am in the morning and left at 3:30 pm in the afternoon. After grabbing a milkshake at the drugstore, he would hurry over to Quiller’s and then close the store at 5:00. After graduating from high school in ’49, George continued working for Quiller’s driving a delivery truck, stocking grocery shelves, and cutting meat.

In 1951, he enlisted in the U.S. Navy where he worked in the commissary, and when he was discharged in 1955, his training at Quiller’s cutting meat provided him with a lifelong career. George went to work as a meat cutter for A&P Groceries on the east coast, and then in ’63 returned to Denver to carry out the same work for the National Tea Company.

A story about George Nelson would not be complete without highlighting the man’s love for dancing and his lovely wife, Betty. Throughout his life, he has enjoyed all kinds of dancing. He even met his wife, Betty, at a dance. They were married in 1983, and the couple spent many happy times together on the dance floors of the Denver area.

George and Betty also spent many fun weekends at the old Gundy house in Chase Gulch, purchased by Martin Nelson in the 1950’s and moved from its original location to where it sits today. The house came to George when Martin passed away in ’78, and in 1985, with the assistance of Betty’s children and several friends, they cleaned the place up and turned it into their refuge in the mountains. They spent 25 happy summers playing cards, dancing and partying with friends and family in the old house, and today the City of Black Hawk preserves and protects the home as a historical landmark.

END_OF_DOCUMENT_TOKEN_TO_BE_REPLACED

Benefitting the county, schools, and much more By Don Ireland   This year marks the 30th anniversary of casinos opening in the former little mining towns of Black Hawk, Central City and Cripple Creek, Colorado. In those early years, smoking was allowed inside ... END_OF_DOCUMENT_TOKEN_TO_BE_REPLACED

Where the dead get to tell their story By Jaclyn Schrock On Saturday, August 21, the Gilpin Historical Society held their annual Cemetery Crawl. Tickets allowed the shuttle of hundreds of guests from the Teller House parking lot to the Cemetery. Depending on v... END_OF_DOCUMENT_TOKEN_TO_BE_REPLACED