“A Star is Born” again 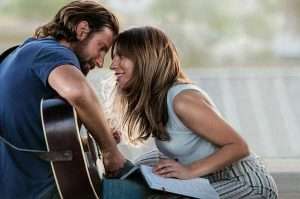 Every couple of decades or so this rags to riches and fame story, “A Star is Born,” is retold and each one brings something unique to the table. The first two, released in 1937 and 1954, tell the tale of a young female who dreams of making it big in the acting worldfinding her muse and then making it bigger than expected putting a wrench in her romance. The 1976, and now 2018 version, make the protagonist a singer instead of actress which doesn’t necessarily make the story better, but I wonder if it is a reflection of the reality of the modern age. So here we are with a new version to entertain us and take us away from the trials and hearings of our lives.

Jackson Maine, played by Bradley Cooper (“Avengers: Infinity War,” “American Sniper”), is a popular rock star struggling to continue his career with health problems magnified by his drinking and drug use. He stumbles into a bar and encounters Ally, played by Stefani Joanne Angelina Germanotta, aka Lady Gaga (“American Horror Story,” “Muppets Most Wanted”), a struggling waitress and inspiring singer without the self-confidence to do more than sing in dark clubs late at night. Jackson realizes that Ally has a one-of-a-kind voice with a message behind her words and encourages her to pursue a singing career. Reluctant at first, Ally finds herself quickly becoming a star, vowing to never change from who she was. As Ally’s stardom eclipses Maine’s fame, Jackson struggles to watch her slowly change, trying to keep her grounded through their special relationship, but giving her every opportunity to succeed without holding her back.

Singing. Yes, the vocals are the stars, which is no surprise from Lady Gaga, but who knew Bradley Cooper had a great voice? He embraces a rough, southern hillbilly rock style which makes you wonder if acting was not his only dream. If you are not already familiar, Lady Gaga has perfect pitch (as far as I can tell) with a pure tone that makes my heart melt.

Acting. Cooper has received several acting awards from the Screen Actors Guild, MTV Movie Awards, and Critics’ Choice Movie Awards, and even a Denver Film Critics Society Award; and he delivers a fantastic acting job for this movie, too.

Inside Joke. Jackson is driven around by his chauffeur, played by Greg Grunberg (“Star Trek: Beyond,” “Heroes”), and Jackson’s therapist is played by Ron Rifkin (“Limitless,” “Gotham”). These three played pivotal roles in an early 2000s TV action series, “Alias.” Alas, the star of “Alias”, Jennifer Garner, did not make an appearance, probably because she was getting back to her action star roots in “Peppermint,” but having the other three together was a treat.

Music. The songs were very good and likely to stick in your head.

Language. There are more than 100 f-words in this movie for no apparent reason. I don’t mind the occasional use when it makes sense to use the word. There are some industries in which this word is tossed around as if you were getting paid a dollar every time you use it. Most of the time, it is used this way by folks with little education. With more education comes exposure to alternative words that better describe a feeling or action. Also, it seems perfectly acceptable to use the word when confronted by sudden pain or a shocking situation. This movie is a love story and there are very few shocking or painful moments.

Adjectives and adverbs. Actually, it’s the lack of creative adjectives and adverbs that fail this movie. It seems the writers have no way to describe anything without using the f-word. Even if you talk this way, I think it would get to you in this film. There is no satisfactory reason for it and I call it lazy writing. There are thousands of adjectives and adverbs in the voluminous and glorious English language – use them! There are 43 acceptable words to substitute for “very” alone: “Your nose is f-ing beautiful” can be phrased using absolutely, exceedingly, acutely, surpassingly, or wonderfully, instead, just to name five of the 43. Egads.

The quality of acting, the love story, and the plot, are all wonderful things about this movie. However, the use of language is unforgivable. The movie is rated R for language throughout (duh), some sexuality, brief nudity, and substance abuse. The sex scenes are not over the top; you know what they are about to do, but the deed is not shown on screen (bonus points). If the unreasonable use of the f-word doesn’t bug you, you are likely to love this film. It bugs me. This film would be worth the highest rating, if not for that. Therefore, I rate the film three (maybe too high, but the acting and singing are really good) out of five dropped guitar picks. My lovely wife rates it two out of five bags of frozen peas.

END_OF_DOCUMENT_TOKEN_TO_BE_REPLACED

Benefitting the county, schools, and much more By Don Ireland   This year marks the 30th anniversary of casinos opening in the former little mining towns of Black Hawk, Central City and Cripple Creek, Colorado. In those early years, smoking was allowed inside ... END_OF_DOCUMENT_TOKEN_TO_BE_REPLACED