A slot in Black Hawk that always pays off! 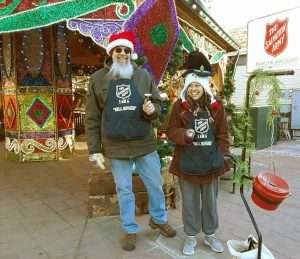 The familiar sounds of the Salvation Army bells and the appearance of the Red Kettles located around malls and stores during the Holidays have a long and interesting history. Usually starting on Black Friday and continuing until the day before Christmas Eve, the Red Kettle Drive provides income to help folks right here in our community.

According to www.salvationarmyusa.org, the Red Kettle Drive originated in 1891. Salvation Army Captain Joseph McFee was distraught because so many poor individuals in the San Francisco area were going hungry. During the holiday season, he resolved to provide a free Christmas dinner for the destitute and poverty-stricken. He only had one major hurdle to overcome – funding the project.

Where would the money come from McFee wondered. He laid awake nights, worrying, thinking, and praying about how he could find the funds to fulfill his commitment of feeding 1,000 of the city’s poorest individuals on Christmas Day. As he pondered the issue, his thoughts drifted back to his sailor days in Liverpool, England. He remembered how at Stage Landing, where the boats came in, there was a large, iron kettle called “Simpson’s Pot” into which passers-by tossed a coin or two to help the poor.

The next day Captain McFee placed a similar pot at the Oakland Ferry Landing at the foot of Market Street. Beside the pot, he placed a sign that read, “Keep the Pot Boiling.” He soon had the money to see that the needy people were properly fed on Christmas.

Six years later, the kettle idea spread from the west coast to the Boston area. That year, the combined effort nationwide resulted in 150,000 Christmas dinners for the needy. In 1901, kettle contributions in New York City provided funds for the first mammoth sit-down dinner in Madison Square Garden, a custom that continued for many years. Today in the U.S., The Salvation Army assists more than four-and-a-half million people during the Thanksgiving and Christmas holidays.

Captain McFee’s kettle idea launched a tradition that has spread not only throughout the United States, but all across the world. Kettles are now used in such distant lands as Korea, Japan, Chile, and many European countries. Everywhere, public contributions to Salvation Army kettles enable the organization to continue its year-round efforts at helping those who would otherwise be forgotten.

Gilpin County has its own Red Kettle Drive located in the gazebo at the corner of Black Hawk Street and Main. Volunteers ring the bell Friday Saturday and Sunday between 10 a.m. and 4 p.m. This is a critical fund raiser to support Salvation Army assistance for Gilpin County residents. 2017 was the third year the Red Kettle was located in Black Hawk and thanks to the generosity of passersby, the kettle yielded $1,139 which was a $462 increase over 2016.

So the next time you are around the area of the gazebo Friday thru Sunday, drop a contribution into the Red Kettle – it is one of the slots in Black Hawk that always pays off! Folks can also volunteer to be bell ringers. Go to www.signupgenius.com/go/70a094dadaa22a0fb6-redkettle. Sign up, bundle up, and get ready to make a difference this holiday season. Who knows, bell ringing might turn into a new rewarding holiday tradition for your family.

END_OF_DOCUMENT_TOKEN_TO_BE_REPLACED

Where the dead get to tell their story By Jaclyn Schrock On Saturday, August 21, the Gilpin Historical Society held their annual Cemetery Crawl. Tickets allowed the shuttle of hundreds of guests from the Teller House parking lot to the Cemetery. Depending on v... END_OF_DOCUMENT_TOKEN_TO_BE_REPLACED