A road trip through a lifetime of vehicles 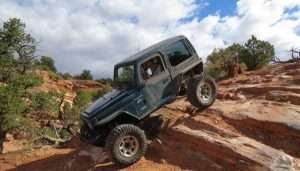 Last week I ran out of time and room to review the lifetime of vehicles that had passed through my hands as we raised our four children, and reviewing the 28 vehicles from our days in Houston through the present here in Black Hawk would be too much. So I’ll just bundle most of the seven Jeep Cherokees together with the summary that I acquired and built one of those fine 4×4 vehicles for each of my kids with a lift and big tires, and they served them well in high school, and beyond. We’ll just look at some of the fun vehicles, though they were all fun or unique in some way other than the Toyota Corolla we bought new.

Digressing to my senior year in Norman, OK at the University of Oklahoma, there was a bug-eye Sprite in my neighborhood, and I always loved the look of that little English convertible. So when one of my student friends had a ’71 MG Midget for sale, I scraped together the funds to buy it. The price was right since he had rebuilt it and never could get it started again. Turns out the distributor was clocked 180 degrees incorrectly, so that was fixed and after graduation, I enjoyed driving it around Norman and even up to Oklahoma City where I was the Art Director for the Cowboy Hall of Fame magazine. Robin and I took it to KS for my 5-year high school reunion, and she loved it so much that she called her brother to come pick her up and fly her home in his plane! Whenever you drove it through a puddle, the electric fuel pump would quit, so was always fun having to crawl under the rear axle and get the pump going again. And the headlights would sometimes quit, courtesy of the Lucas electrical system, and the throttle would stick occasionally – finally blew up the motor driving from OKC to Norman at wide-open throttle for 45 minutes… Lots of adventures in that little sports car!

After we had the fourth kid, a normal sized vehicle just wasn’t going to cut it, so we purchased a huge ‘88 4×4 Suburban that was a God-send! With three rows of stadium seating, we could see the kids back there and their mouths moving, but couldn’t hear them! Might have been partly due to turning up the radio, but it was great for those long road trips from Houston to KS to see the parents. That tank survived a lot of scrapes, and it’s fair to say that the other vehicles encountered by my wife and daughter didn’t fare so well.

For my daily 200 mile commute around Houston for my graphic design business client meetings, I decided I needed something more economical, so after test driving a new Mazda XR8 sports car, decided the 2-seater was too small and bought a new ’93 Camaro Z28 off the showroom floor. That car was fast, and I had many a good Friday night street race with that baby – mostly with my friend in his new Trans Am! It did have a token back seat, so the kids could ride back there with their knees up around their chin.

The first ’86 Cherokee was purchased for my oldest daughter to drive to high school, and of course didn’t have brakes, so I fixed those and within a month she had wrecked it, but she was okay. After more driving time, we got her another Cherokee, got it running the day before she headed off to college, only to have it overheat and blow up the motor. Years later, we got another Cherokee that ran great, until she finally rolled it while doing donuts in a pasture.

Once we moved to the mountains near Black Hawk, I needed something with 4WD, so bought myself a stock Jeep Cherokee, that I kept feeding and watched it grow into a monster rock-crawler with 1-ton axles, 4-link suspension, and 37” tires. I had more fun with that Cherokee and made lots of friends from around the country via our CO-XJ off-roading group and helping others build their Jeeps, but finally sold it and bought a ’97 Jeep Wrangler. Of course I had to feed it as well to make it as capable off-road as my Cherokee had been, and it is still my trusty rock-crawler today. The downside of building a huge Jeep is that they become less stable on-road at interstate speeds (ever hear of death-wobble?), so I needed to find something that I could commute to my office in Broomfield with when I needed a break from the Jeep. An 80 Honda Goldwing motorcycle was great, but not so much in the rain.

So I had always loved the old Corvette Stingrays from when I was a kid growing up in KS and one of my friends older brother had one that he used for road course racing. This seemed like a good practical choice for a fun summer car, so I shopped around and found one in Colorado Springs that had been used for drag racing, and was still running and within my budget. Of course it used a quart of oil for every tank of gas, didn’t have second gear, and laid down a nice James Bond smoke screen when stomping on the gas! So again the rebuilding work started, with new tires, clutch, interior, seats, a new 383 stroker motor, and a new 5-speed transmission. It still needs paint, but I love it anyway and it’s a blast to drive with the t-tops off on the canyon roads.

My current project is building a ’60 Willys pickup that Robin and I acquired on a road trip to the KS-WY-CO border one weekend. Since it didn’t have a motor, it was the perfect candidate for swapping onto a donor truck frame with a fuel-injected V8 and 5-speed transmission if we could find one. My first potential donor was a ’98 Dodge Ram pickup, but it had a nearly new refurbished motor and was too nice to tear apart, so I ended up replacing the clutch, bed, doors, and fenders until it was a great runner again that I loved, but ended up selling it to a friend to fund a Tahoe for my wife.

Back to the Willys project once again, it turned out that my neighbor Jeeping buddy had a few potential candidates in his yard for sale, so I drug one home and started to tear it down. The donor was a ’90 Ford F250 crew cab and long bed, so was about three feet too long to work for my Willys swap. With the help of a couple of friends, we shortened the frame, and used my antique tractor to set the Willys cab on the donor truck frame so we could fabricate new body mounts. Someday I’ll have time to work on it again, but that’s a story for another day!

END_OF_DOCUMENT_TOKEN_TO_BE_REPLACED

ShareTweetShare on Google+Pin on PinterestSend with WhatsApp
15 recommended

END_OF_DOCUMENT_TOKEN_TO_BE_REPLACED

Where the dead get to tell their story By Jaclyn Schrock On Saturday, August 21, the Gilpin Historical Society held their annual Cemetery Crawl. Tickets allowed the shuttle of hundreds of guests from the Teller House parking lot to the Cemetery. Depending on v... END_OF_DOCUMENT_TOKEN_TO_BE_REPLACED